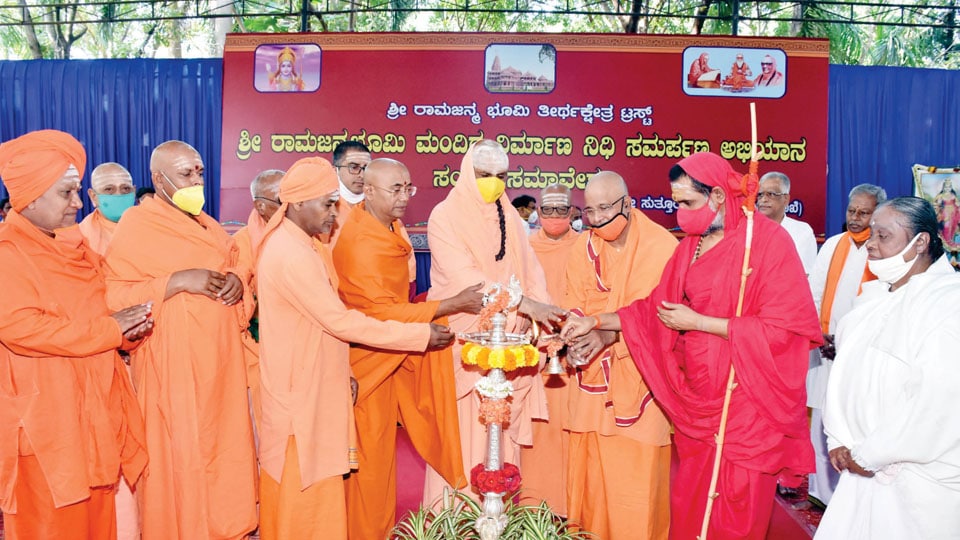 Mysore/Mysuru: Suttur Mutt and Sri Ganapathy Sachchidananda Ashram have announced a donation of Rs.10 lakh each towards the construction of Sri Ram Temple at Ayodhya in Uttar Pradesh.

This was announced at the Sant Sammelan (Religious Congregation) organised by Vishwa Hindu Parishad (VHP) at Suttur Mutt in city this morning.

Speaking on the occasion, Suttur Seer Sri Shivarathri Deshikendra Swamiji said millions of Hindus rejoiced when the Supreme Court announced its verdict on the centuries-old Ayodhya temple row. It was a dream come true for Hindus for which they were waiting for a very long time. For the Hindus, Lord Ram has been the symbol of pride and building a temple dedicated to him was the wish of every countryman. After the SC’s verdict, Ajit Doval, National Security Advisor to Prime Minister Narendra Modi, convened a meeting of the communities concerned fearing law and order problem. But surprisingly, every community welcomed the Apex Court’s ruling. Such unique communal harmony could be seen only in India, he added.

The Seer, said besides building temple, a library and a prayer hall were also coming up in the temple complex. The VHP has launched a drive to mobile funds for building the temple dedicated to Lord Ram not due to dearth of money but in order to make every citizen to be a part of this historic event. “I will appeal the Seers of all Mutts to help the VHP to pool funds from every village in their respective places,” the Seer added.

Swami Muktidanandaji, President, Ramakrishna Ashram, Mysuru, said the construction of Sri Ram temple has brought all the Hindus together and has paved way for reinventing Hinduism.