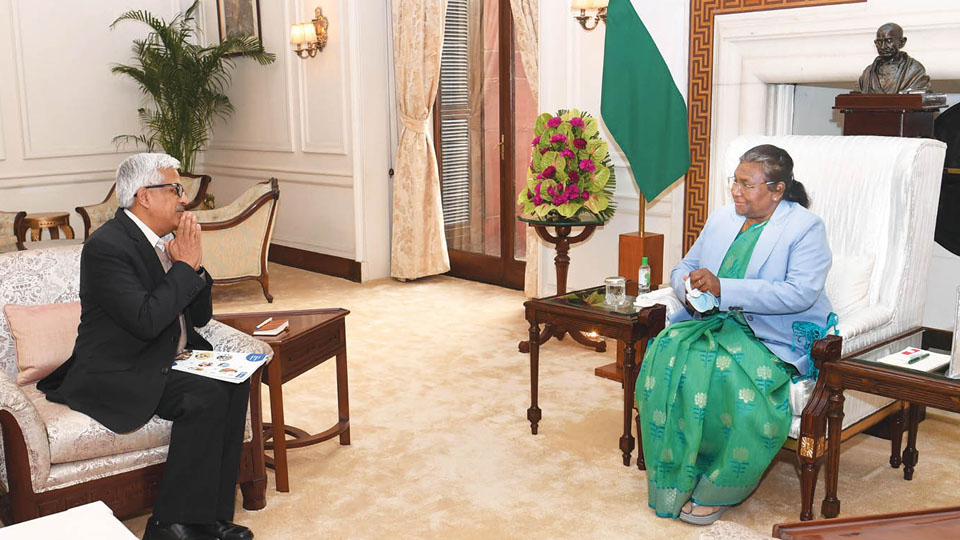 It was a courtesy call where Dr. Balu discussed various facets of tribal development with the President who hails from the tribal community in Odisha’s Mayurbhanj, one of the most remote and underdeveloped districts of the country.

Dr. Balu’s SVYM has grown to be one of India’s finest NGOs by making a difference and a positive impact on the lives of the tribal communities. He has extensive experience in working with the tribals and fostering their empowerment.

Speaking to Star of Mysore this morning, Dr. Balasubramaniam said that he called on the President as it is a matter of great pride for him to meet India’s First Citizen and the Supreme Commander of the Armed Forces as he spent most of his life amidst tribal communities primarily in Mysuru and H.D. Kote.

“In fact, we have to learn from tribals about sustainable development and coexistence and the rest of the society should understand it. I was very inspired by the President’s groundedness, and her understanding of the grassroots realities and I really felt that she is the true People’s President,”                                   he noted.

“My discussion with her centred on understanding tribal development from her point of view — treating tribals not with sympathy but with empathy. After the courtesy call, the President asked for copies of my books and I shared them with her,” he added.   Dr. Balu presented the President with his books — ‘I, The Citizen’, ‘Voices from the Grassroots’, Swami Vivekananda As I See Him’ and ‘Leadership Lessons  for Daily Living.’