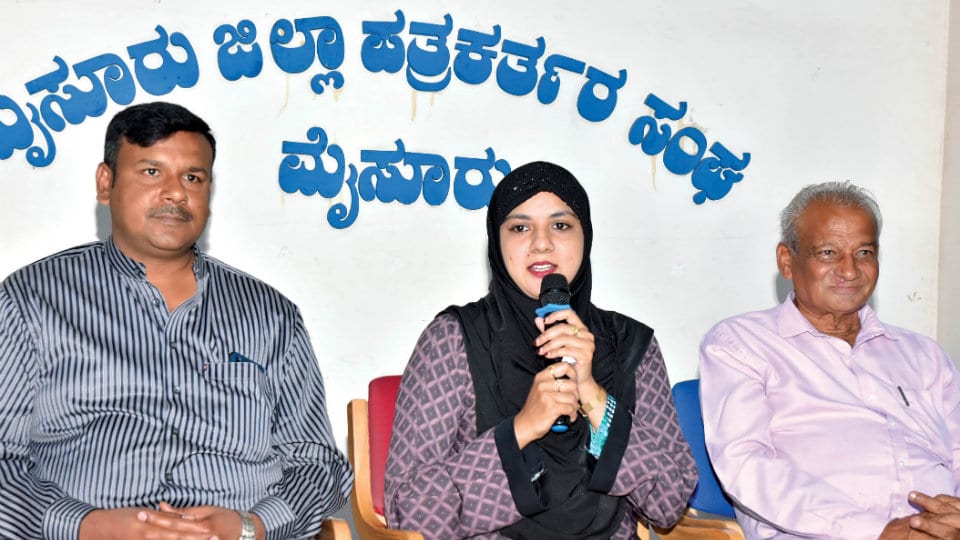 Mysuru/Mysore: Even as central teams have arrived in the city for carrying out a sanitation survey and field verification for Swachh Survekshan-2020,the City’s new Mayor, Tasneem, has appealed the residents of the city for maximum participation in the survey to ensure that the city regains the ‘cleanest city’ tag.

Addressing a press meet at Patrakarthara Bhavan here yesterday, Tasneem said that  she would focus on carrying out cleanliness campaigns throughout the year and not limit the Swachh Survekshan works to just when the survey is being carried out.

Asserting that she  would discuss the matter with MCC officials on carrying out cleanliness activities throughout the year, she also added that as a former member of the Health Standing Committee, she had raised the issue during the MCC council meetings following complaints that cleanliness activities come to a standstill once the survey concludes.

Pointing out that the MCC needs another 60,000 positive feedbacks to be in the reckoning for the ‘cleanest city’ tag, Tasneem  asked the citizens to submit feedbacks by filling up the eight-point questionnaire and sending the same through mobile app or government website.

Highlighting her plans for garbage disposal, she said that the MCC  would work towards finding a permanent solution for indiscreet waste and garbage dumping on the city outskirts.

Thanking the media for its support,Tasneem said  she was grateful to JD(S) Supremo H.D.Devegowda,H.D.Kumaraswamy, MLAs S.R.Mahesh and G.T.Devegowda and other party leaders for reposing faith in her.