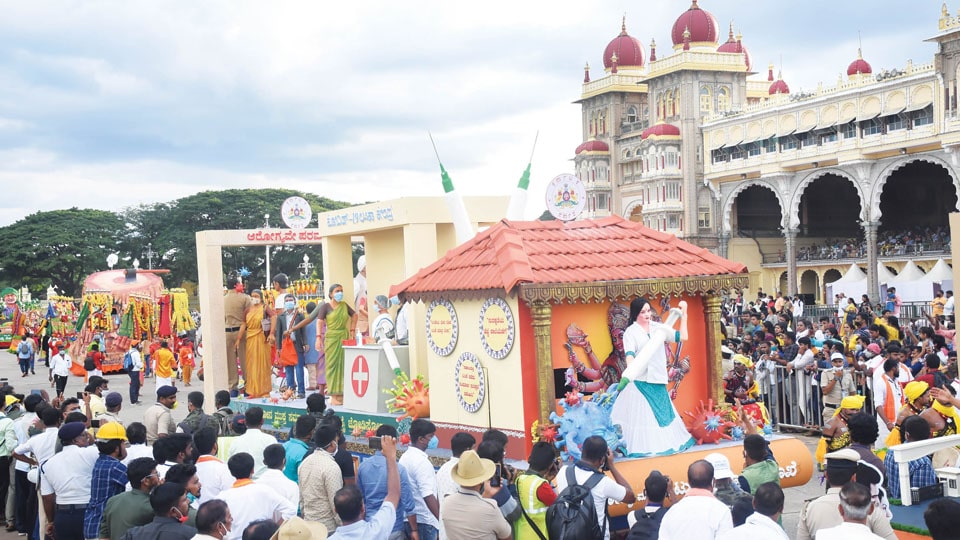 Mysore/Mysuru: Though the ‘Jumboo Savari,’ marking the culmination of Navarathri, was restricted to the Palace premises due to COVID-19 pandemic, the six Dasara Tableaux and eight cultural troupes that were part of the grand ‘Jumboo Savari’ yesterday, captivated the crowd due to their sheer elegance and excellence.

The tableaux procession was led by MUDA’s tableaux on Group Housing Scheme, followed by the one on COVID awareness (COIVD-free Karnataka), Azadi Ka Amrit Mahotsav, Ecology and Environment, Anebandi and the one on farming jointly made by Agriculture and Horticulture Departments.

Rajashekar and team’s Chilipili Gombe, Kombu Kahale by Mandya’s H.K. Nalini and team, Gaarudi Gombe by Sridhar and team and Chende Vadana by Udupi’s Vasudev Bannanje and team too gave an excellent  presentation which  delighted the crowd. The cultural performances  ended with Yakshagana and Chande Maddale by Mahalingeshwara Seva Samiti.

Lastly and most importantly, Goddess Chamundeshwari  idol placed  in 750-kg Golden Howdah carried by elephant Abhimanyu, accompanied by Kumki elephants Chaitra and Kaveri, marched with majesty amidst loud cheers and chanting by the gathering, with Mounted Police, Police Band and three Police contingents in the front, thus bringing an end to the 10-day Dasara festivities, which is celebrated as ‘Nada Habba’ across the State.

Prior to the start of the ‘Jumboo Savari,’ caparisoned Nishane and Naupat elephants — Dhananjaya, Ashwathama and Gopalaswamy — took part in the ‘Nandi Dhwaja Puja,’ which was performed by Chief Minister Basavaraj Bommai and his wife Chennamma.