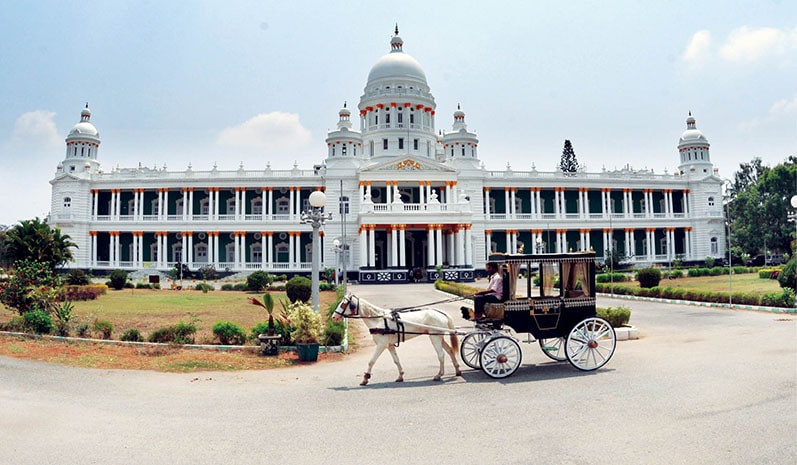 Mysore/Mysuru: After many media reports that the iconic Lalitha Mahal Palace Hotel will be handed over to the Taj Group, the issue will come up before the Cabinet Sub-Committee meeting tomorrow where a final decision will be taken to hand over the Hotel to private players.

The Cabinet Sub-Committee meeting will be chaired by Chief Minister Basavaraj Bommai and one of the subjects that will be taken up for discussion is the handing over of the Hotel to private players. Sources said that the State Government is keen to hand over the Hotel to a private agency or a hotel conglomerate which has expertise in managing heritage property.

Confirming this to Star of Mysore this morning, the Managing Director of Jungle Lodges Manoj Kumar said that the CM will take a final call. “Yes, there is a proposal before the Government to hand over the management of Lalitha Mahal Palace Hotel to private players and discussions were on in this regard at Government level for over one year,” he said.

The meeting and discussion under Tourism Minister Anand Singh on the issue are already over and the final call has to be taken by the Cabinet and the Chief Minister. “We will have to await the Cabinet’s decision to proceed with the formalities,” Manoj Kumar said.

However, M. Appanna, the Chairman of the Jungle Lodges and Resorts, said that the issue has not come to his notice. “I am not aware of the issue and I have no idea if the discussion will come up in the Cabinet Sub-Committee meeting,” he told Star of Mysore.

Manoj Kumar clarified that the Jungle Lodges and Resorts Chairman is not a member of the Cabinet Sub-Committee and as such he may not be aware of the issue. “Yes, the Lalitha Mahal is on the agenda and we will wait for the decision,” he added.

He was, however, non-committal about the handing over of the luxury Hotel to the Taj Group. Department of Tourism Director T. Venkatesh told reporters that the Cabinet Sub-Committee will not meet to privatise Lalitha Mahal Hotel. “Only the management will be handed over to a private player for a certain period,” he added.

In January last year, the Taj Group offered to run the luxury hotel at a virtual meeting that was chaired by the then CM B.S. Yediyurappa. The Tata Group was represented by Tata Sons Chairman N. Chandrasekaran and other top executives of the company.

Sources said that if the Government decides to hand over the State-run enterprise to private parties, it has to do so after floating a Request For Proposals (RFP) or global tenders. Once the tenders are called for, the property will be leased out to the highest bidder, sources added.