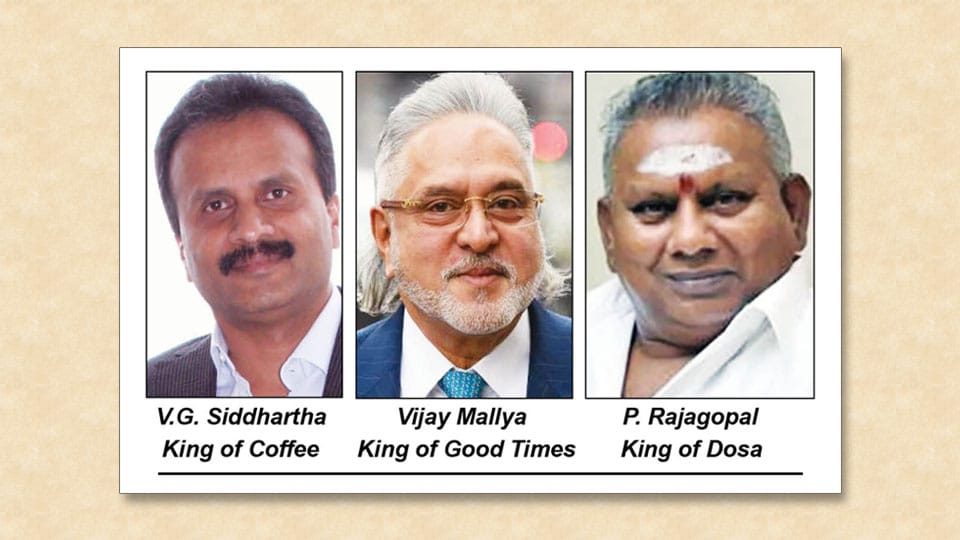 What you don’t see with your eyes, don’t invent with your tongue.—Jewish Proverb

While writing about V.G. Siddhartha, the Big Boss of the omnipresent Cafe Coffee Day with its signature logo of an inverted comma with the legend, who had gone missing in this column yesterday, I had promised to write about three business tycoons who made news in a big way presently.

Let me start with Siddhartha — the King of Coffee, whose body has been found in the Nethravathi River early this morning by fishermen, ending all speculations about his disappearance — Was that kidnapping? Did he fly out of the country? Was he hiding somewhere? Or did he commit suicide? Now, even after finding his body, there is speculation as to whether he really committed suicide etc., etc.

It was interesting to read the letter he had purportedly written to his Board of Directors and Cafe Coffee Day family which surfaced, I do not know how, hours after he went missing. Whatever it is, the letter underscores two important challenges and misfortunes, a majority of Indian successful businessmen face specially since about 20 years. One is the financial troubles and the second is harassment from the Government authorities, specially Income Tax (I-T) and Enforcement Directorate (ED).

The problem Siddhartha faced seemed the same if one reads the letter and assumes it to be a genuine one. I don’t think there is reason to doubt it as his death is confirmed. I guess, just as a dead person cannot have any tales to tell, he also has no reason to be dishonest and tell lies in the death-letter. Specially a person of Siddhartha’s family background, wealth, education and above all his sense of humanism in treating his nearly 50,000 employees as members of his extended family. In fact, he addressed the letter not only to Directors but also to ‘Coffee Day Family.’

Since serious allegations were made against I-T Department, it is understandable the I-T Department should raise doubts of the authenticity of the letter. What else can they do? But it will not take a team of investigators to find out if there is some truth or total truth in what Siddhartha has alleged in the letter. For example, the allegation, “There was a lot of harassment from the previous DG Income Tax in the form of attaching our shares on two separate occasions to block our Mindtree deal and then taking possession of our Coffee Day shares, although the revised returns have been filed by us. It was very unfair and has led to a serious liquidity crunch.”

To find out the truth of the allegation, all one has to do is look into the Income Tax papers relating to this case. Records cannot tell lies.

The I-T officials have never been businessmen and are used only to receiving taxes (what else I do not know!). Therefore, they are unable to understand what it is for a businessman to run the business without financial liquidity. Small example: Banks provide OD facility, generally related to the turnover, to help the company maintain its financial liquidity. Siddhartha mentions of attaching of his shares and taking possession of company’s Coffee Day shares and its adverse effect in salvaging his problems. Government officials armed with draconian legal provisions to enforce their authority and claims can easily become vindictive and vengeful if the individual officer is lacking in ethical values and deals with citizens without a humane face.

Let’s hope the well-paid employees of Siddhartha’s company will continue to receive his grace from heaven and continue their jobs under the new management. But then, the fatal question remains: Who killed the owner of Cafe Coffee Day V.G. Siddhartha? Our laws? Our officials who work those laws? GoK.

The second Big Boss I remember on the occasion is the King of Good Times — Vijay Vittal Mallya, known universally as Vijay Mallya, born with a silver spoon. Even at age 63, he is irrepressible and not the one who will give up easily. Whoever drinks Kingfisher Beer, no matter in which part of the world, he is bound to remember Vijay Mallya more for his Court cases in London and less for the Beer which has been keeping its addicts rushing to rest-rooms.

He was indeed Bengaluru’s pride with his famous United Breweries. He was a kind of playboy too, who indeed loved good life and expected others to have it with little help from his alcoholic drinks. Oscar Wilde said, “Where wealth accumulates, men decay.”  But in his case, with wealth he became ambitious.

Naturally, his political ambition took him to the Upper House of the Parliament — Rajya Sabha. He has been the boss of many companies, but the flagship was always United Breweries. Everything looked hunky-dory till when he decided to fly high with his Kingfisher Airlines. I had the good luck to choose this Airlines four or five times and I was much impressed with the freebies the passengers are loaded with. I still use the shaving kit the Airlines gave me and it was of high quality.

Maybe, what goes up must come down. Unable to defy the law of nature, I mean the Law of Gravity, the high flying Kingfisher came down with the same speed with which it went up and got stranded on Mother Earth, throwing many employees into grief and even suicide while Mallya is frequenting the London Law Courts routinely like one visits the restaurant for eating out.

Here, I remember the Big Boss of America’s famous Virgin Airlines, owned by Richard Branson, an eccentric kind of an entrepreneur, who has been a role model for many later generation youngsters. Probably, Vijay Mallya thought he could be one up on Richard Branson without realising Richard Branson is a multi-dimensional personality, an intellectual, one who also remembers that no matter how high he may fly, he must come down to earth and that is where he belongs. That is probably the secret of his success. He not only accumulates wealth, but also keeps proper account of it so that he may efficiently appropriate it for running his company in a stable manner while planning for the future growth. Here I remember a joke told to me in a bar.

In England, there is a common frog known as ‘Bullfrog’ because of its huge size. As it is called bullfrog, the frog deluded itself to believing that it is also a bull like the real bull. It began to leap around with a feeling of pride. Then suddenly, a bull was moving towards the bullfrog. The bullfrog got upset and told the bull, “See, if you are the bull I am the bullfrog, make way for me.” The bull did not even hear nor see the frog, it simply stamped over it and moved on. I hope Vijay Mallya is not deluding himself to be Richard Branson of India!

About five years back, when I had gone to Dubai to attend the much-touted Dubai Shopping Festival, my friends in a majority voice screamed “breakfast at Saravana Bhavan,” South India’s most popular eating place with many branches in countries outside India too. So we all trooped into the hotel after many stops and enquiries to locate the hotel. That was probably the last time I ate at Saravana Bhavan.

However, I began to hear and read about Saravana Bhavan, nay rather its Founder P. Rajagopal — the King of Dosa, all for negative reasons. Fortunately, the Saravana Bhavan chain of restaurants continue to have the patronage because of its high quality of food. Unfortunately, its Founder Rajagopal seemed to have proved Oscar Wilde right when he said, “Where wealth accumulates, men decay.” In this case, Rajagopal accumulated crores and crores of rupees and correspondingly there began a decay in his personal life and character. As he prospered, he got married and set up the usual family. However, the doomsday beckoned him.

Then an astrologer advised him to take another woman as his third wife. But there was a catch. The third woman he was coveting was already married. However, Rajagopal got passionate about this married woman, Jeevajothi. She was not only beautiful but also lucky charm as the astrologer said.

It is a quirky presumption on the part of many wealthy people, that any woman would fall for them the moment a proposal is made (which probably is the reason why in Hollywood many famous actresses did not protest when groped by famous actors, directors and producers). Under such a presumption, Rajagopal had asked Jeevajothi’s husband to divorce her so that it will facilitate Jeevajothi’s marriage with him. This was rejected outright by Jeevajothi and also by her husband.

Rajagopal then resorted to methods most foul. He orchestrated multiple threats, beatings and exorcism against her and her family. By the way, Jeevajothi is the daughter of one of his employees. According to reports, in 2001 after an attempted murder, he successfully orchestrated the murder of her husband Shanthakumar. He was sentenced to life for murder after the case was heard in the Supreme Court in 2019. Rajagopal, however, died on July 18, 2019 at a private hospital in Chennai following a cardiac arrest. There is no medicine for Fate.