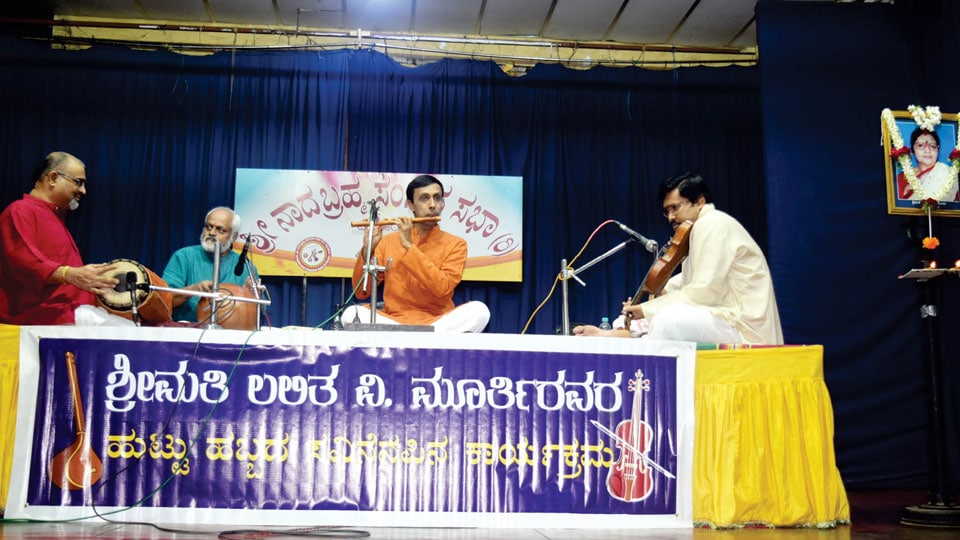 The Nadabrahma Sangeetha Sabha had organised a fine flute concert on the 8th of December 2019, in memory of Lalitha V. Murthy. Young and proud flautist of Mysuru, Vidwan V. Vamshidhar presented this concert accompanied by Vidwan Matthur Srinidhi on violin, Vidwan H.S. Sudheendra on mridanga and Vidwan G.S. Ramanujam onthe ghata respectively. Vamshidhar is the grandson of Vidwan Deshikachar from whom he had his initial training. Later on he continued his tutelage under his uncle Vidwan D. Balakrishna. They both have presented innumerable Veena-Venu concerts. The typical Mysuru baani adorns Vamshidhar’s style of playing flute. Raga bhava reigns his blowing and the rich naada follows obediently.

Vamshidhar’s manodharma illustrates phrases  that are dipped in classicism only. There are no lavish or profuse sangathis. His contour of the raga always are in controlled and precise strokes. Abheri and Kambodhi were best sample of this. His soft blowing is also very much suitable for his creative mood or manodharma. The hidden laya in his alapana could not go unnoticed in Abheri. Mathur Srinidhi responded equally well on his violin. ‘Bhajarere maanasa’ (Mysore Vasudevacharya)was perfect with kalpana swaras with all the permutations and combinations in bright colours.

The main attraction of the day was a Pallavi in raga Kambodhi. His matured manodharma came alive in the rendering of raga and Taana. ‘Karimoravinaleda Hare Krishna’, the Pallavi was set to Adi taala. A Ragamalike complimented  with Saveri, Hamir Kalyani, Hindola by Vamshidhar and Behag and Anandabhairavi by Mathur Srinidhi was attractive. Tani Avartana by Sudheendra and G.S. Ramanujam was brilliant. Krishna nee begane baaro and a Tillana in Salagabhairavi by Doreswami Iyengar brought the curtains down.

Young Harish Pandava gave a fine Saxophone recital at Suttur Mutt on the full moon day recently. He was accompanied by C.N. Tyagaraju on the violin and Anoor Vinod Shyam on the mridanga respectively. Harish is a very promising young artiste who is keen on mastering the foreign instrument. His dedication and rich manodharma will both play a vital role in his musical journey. He is also a good singer. This was evident in his singing the opening lines of every composition he played. He tried to include many composers in the compositions he played.

‘Neeve rakshakudu’ by Mysore Vasudevacharya in raga Kadanakuthuhala was the opening number with an attractive chitte swara. After the popular ‘Vathapi Ganapathimbhajeham’ in Hamsadhwani, he gave a short sketch of Chandrajyothi in which he revealed the nuances of the raga. The composition ‘Baagaayanayya’ (Tyagaraja) too was filled with ragabhava. He did not leave a single stone unturned in the alapana of Vasanthabhairavi. He mesmerised the listeners with the magical phrases. Tyagaraja’s ‘Nee dayaraada’ was soothing and the kalpana swaras produced all the possible daatu swaras.

C.N. Tyagaraju too did not lag behind. He was successfully reproducing on the violin, all the techniques  that were being played on the wind instrument! Clarity in the speedy phrases in both the instruments were evident. The short kruthi in the raga Malavi ‘Nenarunchi naanu’ by Tyagaraja led to the main raga of the day – Abheri. Harish displayed his control on the loud instrument by unveiling all the subtle nuances of the raga in a beautiful alapana. His sincere involvement made the composition more enjoyable. The swara duet by him and Tyagaraju was a feast to the ears. Vinod Shyam added to it by his rhythmic playing. He made the Tani avarthana more interesting with his left hand intricate work.