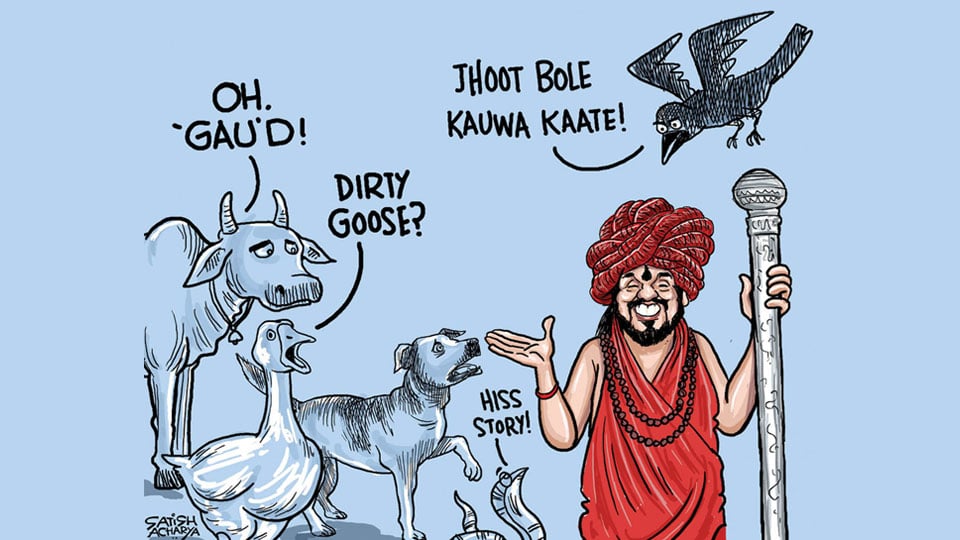 Next year, our lives, as we humans know it on this planet, is going to change forever. Our time here on earth is categorised based on a Three-Age System — Stone Age, Bronze Age and Iron Age. Later, we added the Space Age. Now, thanks to a Godman from our State, we will have a new age — THE SPEECH AGE !

This Godman claims he is going to make animals talk like humans! No, we are not talking about Dr. Do Little, the movie character who talks to animals. We are talking about the Godman with the best set of teeth, a ‘Happy Dent’ smile and has a long silver shaft. He lives in Bidadi near Bengaluru.

This Godman, infamous for his sex scandal, continues to have followers and according to recent news reports and in a video, addressing his devotees, he claims that he can make animals talk like humans!

Brimming with confidence, he said, “I am declaring this after testing this software yesterday. Yesterday, actually, I casually tested this software. It was perfectly working.”

In software development there is something called ‘Unit testing,’ but never heard of ‘casual testing.’ But then this Swamiji did not mention on which animal he tested it. It left us wondering if he chatted with his pet serpent or heard whispers from his pet elephant’s trunk. Who knows? But we wonder what he will name his software? May we suggest Chatty Caty 1.0 ?

When a Godman speaks many tend to believe. Now, if anyone was cynical and doubtful this Swami cleared it all as he raised his hands in a challenging manner and said, “Let this be on record. Within a year, I’ll establish this.”

He then continued to explain in an over-exaggerated fashion stressing on words… “I’ll develop a Prroper, Ppphonetic, lingguistic-cappable vocal cord for monkeys, lions and tigerrs. We are going to have bulls and cows which will talk to you very clearrrly and leggittimately in Sanskrit and Tamil.”

What no Kannada?! We fear if the Kannada protectors hear about this discrimination, the Godman may have to hold to his software tightly and run, lest they break it.

Now, if this comes true, can we mere mortals handle it? First job to go will be of our poojaris. They have been chanting mantras at our homes and temples for centuries. Next year, thanks to this Swami, it will get outsourced to some young Sanskrit-speaking bull.

Soon, these animals will form associations and ask for rights. We humans will no longer be allowed to use ‘Dirty Goose’ as a scolding. The Geese Association will take objection. Female dogs will get a court order stating henceforth they shall not be called bitches, but respectfully addressed as ‘Lady Canines.’

Next, animals could claim fee for using their face for branding. Jaguar cars and Puma shoes will have to pay money to the ‘Big-Cats Welfare Association’. Kingfisher will have to pay the ‘Hakki Raskhana Vedike’ and Bira Beer has to pay the ‘Monkey Brigade’. These animals could even collect ‘hafta’ like ‘Pigeon Union’ who will threaten to shit all over your business unless you feed them.

Further, they will ask for voting rights, then vote bank politics will start. And come elections along with money, bananas will be distributed. And since democracy is rule of the majority, monkeys and rats will have a place in our house of representatives… Oh God! What will happen to our democracy?! Ahh… But coming to think of it, how different is it now?

So, this Swami with his software is going to penetrate and shake the very core of human society and add to the chaos on the planet.

Now, what is interesting is that when a normal person makes such outlandish claims, they can are questioned and even branded insane. But when a ‘man of the cloth’ does it, there is silence. Some even give this mumbo-jumbo the benefit of the doubt.

This Swami’s claim is as bizarre as the, “what could happen if animals talk” scenarios mentioned above.

But what was disturbing in the news reports and the video is that every time he made an announcement about this software and about his plan of “growing new internal organs for animals so they can speak” is that there was rapturous clapping, accompanied by beating of drums and blowing of trumpets! Who are these credulous people?

It was worrisome to see young boys sitting upfront with robes clapping at this man’s claims. Isn’t this exploitation and hijacking of young impressionable minds? Don’t they need rescuing? Like child labour, even children who are psychologically exploited need to be rescued. Hope  Nobel Laureate Kailash Satyarthi is listening.

This Swami, instead of making animals talk, should first help the speech and hearing-impaired humans rid themselves of this disability. This is what will make him a Godman.

For now, let’s not panic. Earth will not turn into Planet of the Apes anytime soon. We live in the real world and not a fantasy world. After all, even children know there is no mouse wearing red shorts, yellow shoes and white gloves, walking around whistling and dancing in the real world. They know Mickey Mouse is restricted to a theme park called Disney Land. Sadly many adults in Bidadi theme park don’t.

3 COMMENTS ON THIS POST To “Talking Animals, Dumb Humans !”