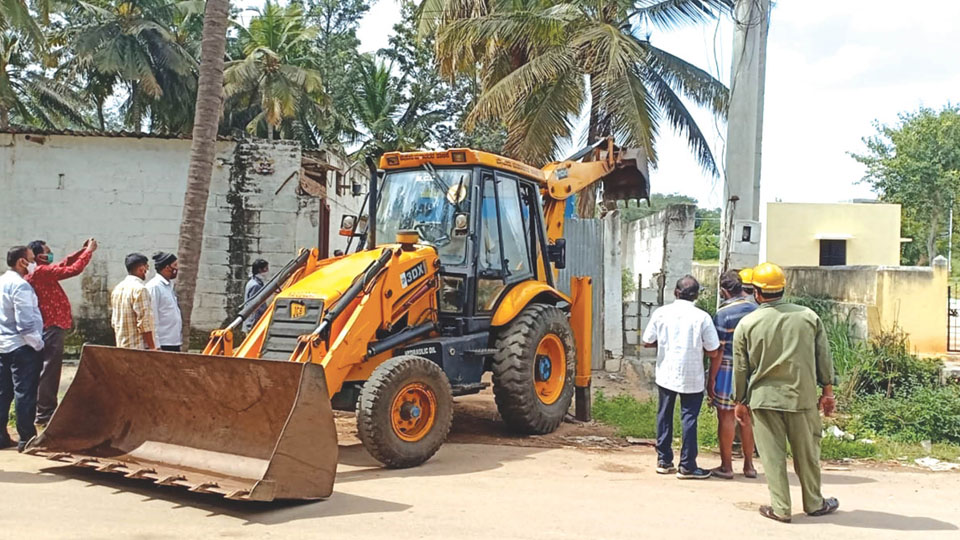 Mysore/Mysuru: Continuing its drive against encroached land, the Taluk Administration on Monday demolished a building constructed illegally on a piece of Government land in Metagalli and have reclaimed the land.

One Jayachandra had obtained possession of a 50’x100’ site along the Raja Kaluve coming under Metagalli Survey No. 1 and 2 belonging to the Government, by creating fake documents and submitting the same at the  MCC Zone-5 Office over a decade ago. Jayachandra had sold the site to one Raju Paandi about 10 years ago.

After purchasing the site, Raju constructed a building there. Thereafter, some residents of Metagalli complained to Tahsildar T.S. Rakshith seeking demolition of the building on the grounds that it was illegally constructed.

Following the complaint, Tahsildar Rakshith verified the authenticity of the documents and when it was discovered to be fake,  he ordered reclamation of the land. Armed with the Tahsildar’s order, the authorities demolished the structure on the site and reclaimed the land that is said to be worth about Rs. 5 crore, with the jurisdictional Metagalli Police providing security.

Meanwhile, RTI activist Nagendra has urged the authorities to initiate criminal proceedings against the then MCC Zone-5  staff and officials, who were hand-in-glove in the encroachment of Government land worth crores of rupees.

Taluk  Revenue Inspector Shivakumar said that the value of the reclaimed land is about Rs. 5 crore. A Police complaint will soon  be lodged at Metagalli Police Station seeking action against encroachers.