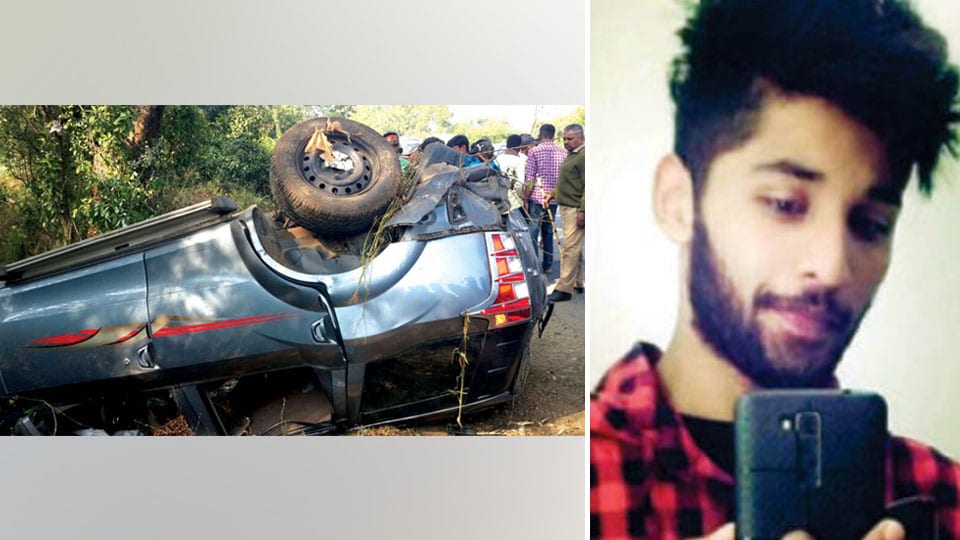 Mandya/ Hunsur: Four persons were killed in separate accidents in Mandya and Hunsur since the last 48 hours.

The latest accident occurred in Hunsur this morning where a school teacher was killed. The victim has been identified as 35-year-old Mahesh, the son of Swamy Gowda of Kothegala village. He was working as a teacher at a Government-aided school at Hirikyathanahalli on the Mysuru-Bantwal Highway.

According to the Police and family members, Mahesh had been to his wife’s house at Yelwal near Mysuru and was returning to school this morning at around 9.30 am on his bike (KA-09 EF-3990) when a speeding Mahindra XUV (KA-18 C-3914) hit his vehicle from behind at Bannikuppe Gate.

The impact of the accident was such that Mahesh was thrown off his bike and he crash-landed on the road, bleeding severely. He died on the way to the hospital. After hitting the bike, the car hit another car (KA-09  MB-5468) and toppled after hitting a tree.

The occupants of the XUV had a miraculous escape. Police said that the people in the XUV fled the spot soon after the accident and efforts were on to  trace them. Hunsur Circle Inspector K.C. Poovaiah and ASI Javaregowda visited the spot and have booked a case.

In Mandya, 19-year-old Mohammad Sahil, who had come to Balamuri near Srirangapatna along with his 15 friends to celebrate New Year drowned in water currents.

He hailed from Kerala and was studying B.Pharma at Srinivasa College in Mangaluru. Though the Mandya District Administration had banned the entry of tourists to Balamuri, Sahil and friends had somehow managed to enter the vicinity.

In another incident that occurred at Huligepura in Maddur, two relatives 30-year-old Yogesh, son of Borashetty of Thigalarapalya in Bengaluru and 35-year-old Krishna alias Kitty, son of Bhairaiah, a resident of Channapattana, were  killed in an accident.

The relatives were going on their bike to their mother-in-law’s house at Kagepura when a speeding Tata Sumo hit them. The impact of the accident was such that both Yogesh and Krishna were killed on the spot.