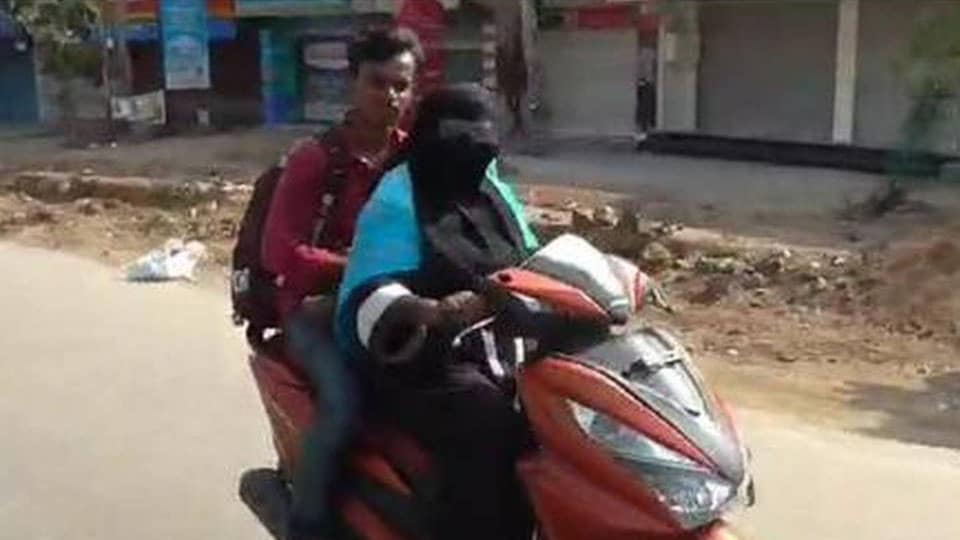 Telangana woman rides 1,400-km to bring back her son stranded in Andhra Pradesh

Hyderabad: A 48-year-old woman in Telangana rode nearly 1,400 km on a scooter for over three days amid the nationwide lockdown to bring her son who was stranded at Nellore in the neighbouring Andhra Pradesh.

Razia Begum, a headmistress at a Government School in Nizamabad, about 200 kms from Hyderabad, set out on the arduous journey on Monday morning armed with local Police permission. She rode solo to Nellore and returned with her 19-year old son Nizamuddin on Wednesday evening.

“It was a difficult journey on a small two-wheeler for a woman. But the determination to bring my son back overtook all my fears. I packed rotis and they kept me going. It was fearsome in the nights with no traffic movement and no people on roads,” Razia Begum said.

Razia Begum, who lost her husband 15 years ago, lived with her two sons, an engineering graduate and Nizamuddin, who aspires to become a doctor. Nizamuddin had gone to Rahamatabad in Nellore on Mar. 12 to drop his friend and stayed back there. Meanwhile, the lockdown was announced following Coronavirus outbreak and he could not return.

Razia Begum decided to fetch him herself. After initially considering taking a car, she discarded the idea and chose her two-wheeler.

On the morning of Apr. 6, she began the journey and reached Nellore the next day afternoon. She left for home town on the same day along with her son and reached Bodhan on Wednesday evening.

She packed ‘rotis’ for the road ahead and rode on, making stops at fuel stations and quenching her thirst at certain points along the way.