Home » Feature Articles » The book I read in the US: The Maharaja and the Princely States of India 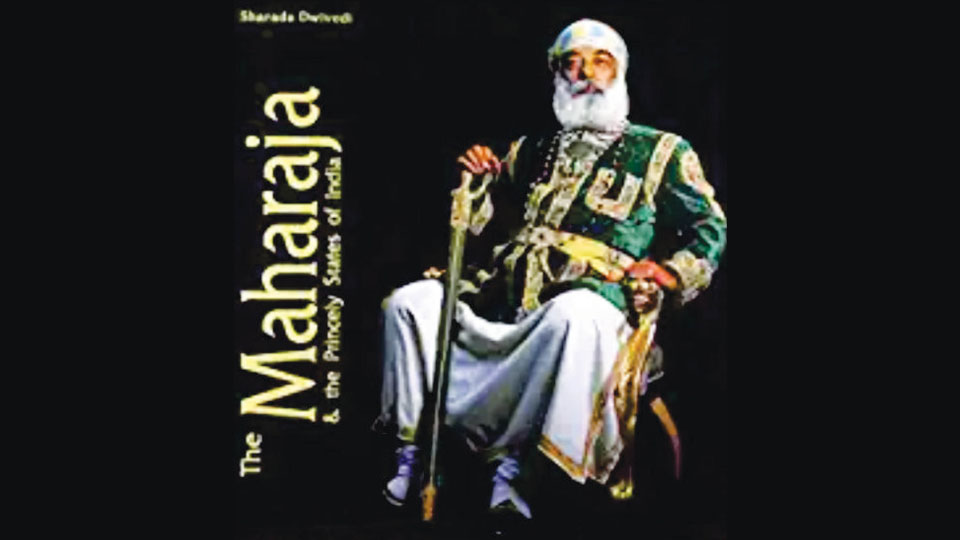 The book I read in the US: The Maharaja and the Princely States of India

Whenever I come to the US, I make it a point to visit the Sunnyvale Library in San Francisco. A beautifully designed coffee-table book drew my attention at the history aisle when I visited the Library this time. It was titled ‘The Maharaja & the Princely States of India.’

Richly illustrated with colour plates, it is authored by Sharada Dwivedi. It was published in the US twenty years ago when Srikanta Datta Narasimharaja Wadiyar was the head of the Mysore Wadiyar family. He also figures in this book among the twenty Maharajas. However, the description is limited to his ancestry, dishes made at festivals, his wedding and the Lalitha Mahal Palace, all in a few lines. The other rulers covered are Jodhpur, Jaipur, Bharatpur, Kotah, Kishengarh, Karauli, Bikaner, Jaisalmer, Udaipur (Mewar), Patiala, Baroda, Gwalior, Jammu and Kashmir, and a few others in brief.

Sharada Dwivedi was a well-known historian, researcher and author. She lived in Mumbai and died on Feb. 6, 2012.

The blurb on the flap says that this book ‘shows the hidden world of princely India in all its glory with photographs of former rulers and their living descendants, many of whom are as revered today as they were in the past, despite the modest lifestyle they have been obliged to adopt. Tourists can become princes for a night or two by staying in one of the several expensive hotels that have been made out of  former Palaces. The book will delight all those interested in the history of the subcontinent, its pageantry, jewellery and traditions.’ This sums up the content and objective of the book.

In defence of the Princes

The foreword is written by Arvind Singh Mewar of the Udaipur Palace. It is naturally in defence of the Princes who lost their princely status and  kingdom overnight. He laments that history has done injustice to them and has failed to give importance to their sacrifice and their voluntary and willing absorption of their States into the Union of India, though it was ‘one of the most astonishing transitions in world history.’ Similarly, it has also failed to highlight or even acknowledge the significant and major role of many of the former rulers in the struggle for India’s independence.  ‘Such is the weakness of democracy,’ he laments.

He praises the Maharajas for adapting to change in an orderly manner, instilling in their people a feeling of pride that democracy was not something princely families would fight against, but something they would welcome for the good of their people and for the continued unification of their great country for which they had over centuries laid down their lives to maintain a unified country against foreign occupation.

Arvind Singh also refers to the ‘selfless sacrifice’ made by the Princes when the special status guaranteed under the Indian States in 1947 to them was revoked by amending the relevant Article. He describes it as ‘yet another betrayal by the government in power in 1971.’ The Princes, however, declined to translate into protest or into dangerous resistance. ‘These significant facts have been largely underplayed and deliberately suppressed,’ he says.

There were over 560 rulers in the undivided India at that time and were called variously. They varied in size and wealth. Some States had budgets comprising millions of rupees while others had merely a few hundred. The Residents or Agents appointed by the British government kept an eagle eye on the goings on within each State. The States were divided into three main categories — 118 Salute States, 117 Non-Salute States, while the third included 327 hereditary landowners, known as jagirdars, thakurs and talukdars. Of the 118 States, only five rulers were accorded gun salutes ranging from 21 down to 19, 17, `15, `13, 11 and nine. They included Mysore, besides Hyderabad, Baroda, Gwalior and Jammu & Kashmir.

The rulers maintained close contact with the people and spent several hours listening to their complaints and allegations. They toured their territories with no bodyguards, barricades, pilot cars or outriders. There were no security arrangements ‘as are evident with the politicians in the India of today.’ Of course, there were exceptions. While some Maharajas squandered away the entire assets and revenues of their States, others left the entire administration to their Dewan and their Council of Ministers. However, there were several model States ruled by enlightened rulers like Mysore, Baroda, Travancore, Hyderabad, Indore, Gwalior, Bikaner and even smaller States like Aundh, Sawantwadi and Gondal.

Indian rulers had amassed enviable collections of jewellery. The most celebrated bejewelled artifact ever produced in India was the Peacock Throne, pillaged from Delhi by Nadir Shah of Persia. The most famed jewel in the world, the Kohinoor diamond, adorns the British Queen. There were innumerable other marvels, including the Pitt, Orlov and Hope diamonds, which left Indian shores to dazzle the Western world. The most collection in recent times was that of the ‘slovenly, eccentric, but brilliant’ Osman Ali Pasha, the last Nizam of Hyderabad. He owned the famous 162-carat uncut Jacob Diamond, mounted on a gold base and used as a paperweight. He also had a set of ten flawless square emeralds, each the size of a small egg. His wealth in gold alone was once calculated at about thirty million pounds and jewels of the same value. He had mountains of gold and silver in an underground cellar. They were mostly amassed through gifts he received as a Nazar at his durbars. When the Government of India asked for a loan, gold sovereigns and silver bars were brought from Hyderabad to Bombay by a special train in which the royal treasure filled two railway wagons!

Amongst other rulers who owned magnificent jewellery were the Maharajas of Jaipur, Gwalior, Kashmir, Baroda, Indore, Patiala and Jodhpur. Significantly, Mysore does not figure among them.

Some Maharajas had their eccentricities and led a lavish life. The Nawab of Junagadh, for example, adorned his pet dogs. He kept his canines in the lap of luxury and celebrated their birthdays and weddings in grand style! The late Nawab Hamid Ali Khan of Rampur was said to have had over three hundred cooks in his employ, each specialising in preparing a particular type of dish.

The independence of India in 1947 saw the beginning of the end of their princely life. Some Maharajas, however, wisely provided for alternate means of sustenance like setting up private trusts for their employees and institutions they had established, converting their Palaces into hotels, contesting elections and becoming politicians or joining diplomatic services. Their enchanted world has, however, ended altogether and relegated to the pages of history.

Yet it should be noted that their contribution to posterity has vastly enriched the culture and development of the country. It is in evidence in the shape of dams and canals, educational institutions and libraries, art galleries and museums, architecture, wildlife sanctuaries and zoological parks; in classical music and dance and in exotic cuisine; on the playing field, in splendid Palaces and Palace hotels where the discerning visitor can still savour the graciousness of times past.

5 COMMENTS ON THIS POST To “The book I read in the US: The Maharaja and the Princely States of India”