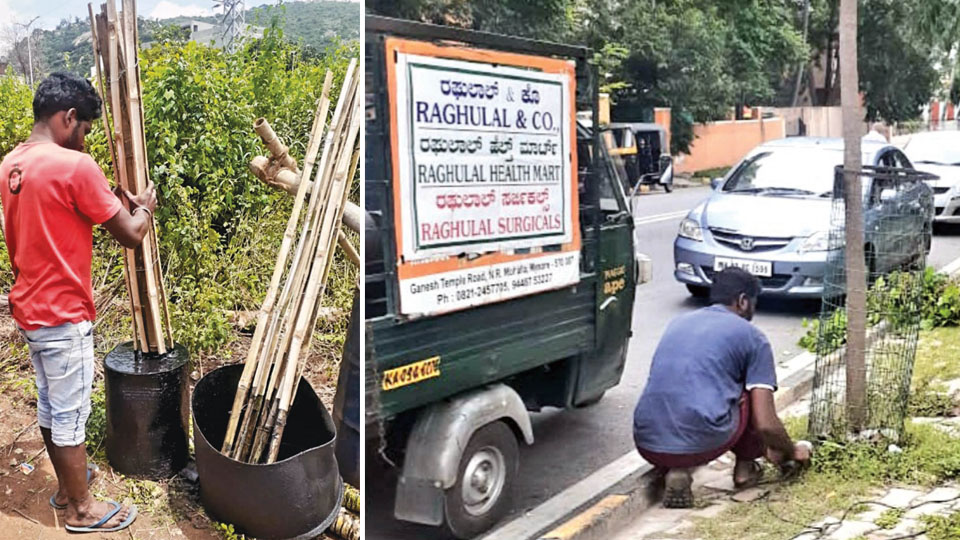 The Pleasure & Pain of Saving Trees !

My good friend N. Raghavan of Raghulal & Co who needs no introduction to Mysureans, has perhaps the unique distinction of not only having planted the largest number of roadside shade trees in and around our city but also protecting every one of them with tree guards till they are fully grown. Yes, he has provided nearly twenty thousand tree guards, completely free of cost and it is because you can see the name of his firm on them that I said that he and his work need no introduction to anyone.

Moreover, I have written about him and his work once before in this column. I have always found that whenever the people of any area request him for tree guards, he despatches a truck load of them instantly. Earlier he used to use green painted, metal tree guards for his mission and of late, having perhaps been bitten by the eco-friendliness bug, he has switched over to bamboo ones which I think is actually a very good idea.

Day in and day out, in some area or the other, you can see his men engaged in the rather laborious process of meticulously dipping the lower end of these bamboo tree guards in tar, to enable them to resist termite attack, before fixing them around newly planted trees. Very recently, when I noticed that many of his more expensive metal tree guards had finished serving their purpose, with the trees they protected having grown tall and robust, I suggested to him that he should start removing and reusing them elsewhere.

Finding that my suggestion made some sense he launched a parallel mission to put it into action and that is when he ran into trouble. Removing metal tree guards from grown up trees is not easy. They have to be cut up. So he arranged for a diesel generator, mounted on a luggage autorickshaw, which could power a cutting tool. While his men were engaged in cutting and removing the tree guards in one locality, the residents of that area mistook them to be thieves trying to steal them!

Even when the beleaguered men summoned their boss to come and rescue them, it did not help much till Raghavan himself managed to contact the local Corporator, requesting him to come to his rescue. But even their own elected representative had a pretty difficult time explaining to the residents that their tree guards were being removed only to be put to use elsewhere to protect the newly planted trees in that area.

In another locality too Raghavan and his team ran into a similar situation and were taken to task by the residents until Dr. T. N. Balakrishne Gowda, the orthopaedic surgeon from Apollo Hospital, who resided nearby and was therefore well- known to everyone present there and thankfully to Raghavan too, happened to arrive on the scene by chance and defused the potentially explosive situation !

When Raghavan called me up after these two incidents to tell me of his travails, I was naturally pretty amused. So I suggested to him that henceforth he should perhaps inform the local Police Station and ensure that a Police Constable is posted to oversee the theft, before ‘stealing’ his own tree guards from that area! With his great faith in my wisdom, he is faithfully following my suggestion now and has even affixed a big banner identifying his team, on the autorickshaw that carries his dismantling equipment as you can see in the picture!

Of the Relics from my Past!

My recent article about the lessons that we should all learn from the life of a humble pencil seems to have become a runaway hit with my readers, going by the spate of responses I have been getting since two weeks.

Shashi, a school teacher at Manipal now, who is my close friend from our first year B.Sc days at Dharwad in the year 1973, after reading my article online has sent me a very interesting drawing that tells us how things were in our good old days. It makes much sense as you can all see. Many readers also wanted me to post a picture of the pencil extender which I had devised as a school boy, from the empty cartridge case of my father’s rifle.

Since I hold not only my childhood but also my childhood longings and belongings too, very close to my heart, I decided to fish it out of the stash of treasured memorabilia from my past. Thankfully, I succeeded but only after rummaging through things that have brought many fond memories flooding back to me! You can see it in the picture alongside.

I used it to extend my pencils not only during my school days but all through my B.Sc and MBBS too, where it was ideal to extend the already short colour pencils that I had to use for the drawings in my practical records, every one of which I have carefully preserved to this day!

Incidentally, the pointed stainless steel pencil cap that you also see in the picture was a gift given to me by my Tibetan friend, Chock Tsering when we parted company after completing our PUC in the year 1971. We first met when we were in the fifth standard in the St. Mary’s English Middle School. That was the time when the children of many Tibetan refugees from the Gurupura and Bylakuppe camps near Hunsur, joined our school. Tsering was from the former while another boy Sonam Wangyal was from the latter.

The three of us became very close friends because of my unending interest in their stories of how they came across the Himalayas with their belongings, trekking on foot or riding Yaks by day and camping in freezing mountain valleys by night. I quickly picked up their language too because they used to always converse in Tibetan and I used to always sit between the two of them, throughout our school days!

Since any language has great bonding properties, my fairly good proficiency in the Tibetan language helped me very much when later on in life when I served as the visiting physician to the Tibetan camp at picturesque Odeyarpalya during my stint in the Holy Cross Mission Hospital at Kamagere in Kollegal taluk. While Sonam became a pharmacist, Tsering graduated as a Doctor from the St. John’s Medical College, Bengaluru in the year 1977 and is now a neurologist settled in the USA, practising in Monroe, North Carolina. I’m sure that when he reads this article online, he will be touched with my tribute to our dear friendship and also delighted to know that I still have his tiny gift among my most treasured things!

2 COMMENTS ON THIS POST To “The Pleasure & Pain of Saving Trees !”