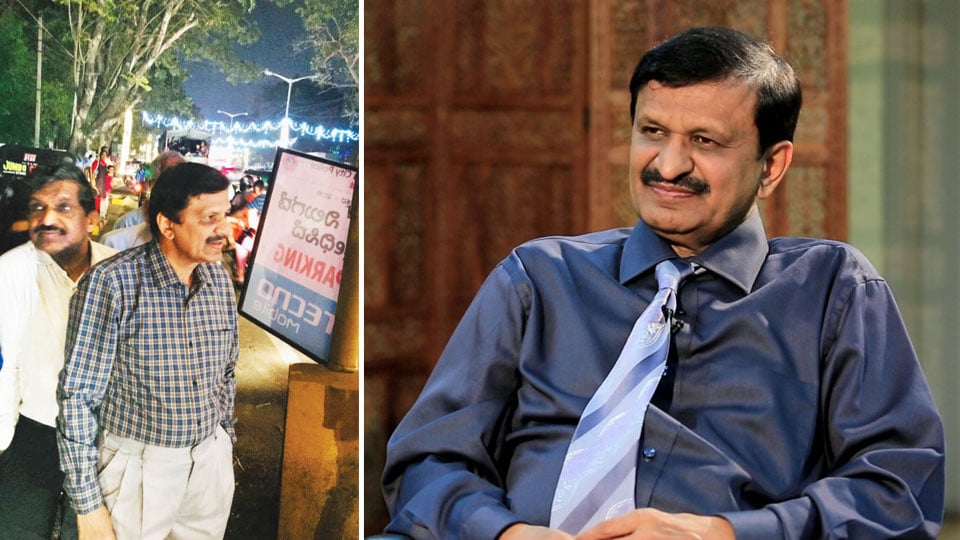 Dasara-2020 will go as a most memorable event in the history of Mysuru. Firstly, it is being held amid threat of COVID-19 pandemic. Secondly, it will be inaugurated by a medical doctor and a Covid Warrior who has given a fresh lease of life to thousands of families.

In a tete-a-tete with this correspondent, Dr. C.N. Manjunath, a noted Cardiologist and Director of Sri Jayadeva Institute of Cardiovascular Sciences and Research, Bengaluru, who will open this year’s Dasara festival atop Chamundi Hill tomorrow, shared nostalgic memories of his student days in Mysuru. From being a spectator of world-famous Dasara festival, he feels it as a big honour for a person from the medical fraternity to open the centuries-old “People’s festival.”

Despite his busy schedule, Dr. Manjunath spoke to Star of Mysore to share his happiness on being invited to inaugurate Dasara festival which according to him was worth more than any award that he had received in his 40 years of service in the field of Medicine. Excerpts.—Ed

Star of Mysore (SOM): What was your reaction when Mysore District Minister S.T.Somashekar announced that you will inaugurate this year’s Dasara festival?

Dr. C.N. Manjunath: For a moment I could not believe that a great honour is bestowed upon me. It was really a great feeling and a lifetime opportunity for me. I deem it as a honour for the whole medical fraternity which is working day and night in the service of COVID-19 patients. My pranams to Chief Minister B.S. Yediyurappa and Government of Karnataka for selecting me to open this historical event. Dasara festival has put Karnataka in general and Mysuru in particular in the world map, and it was a matter of pride that I am inaugurating this event that too in the premises of Sri Chamundeshwari Amma temple, the presiding deity of Mysuru.

READ ALSO  All Shelter Camps closed except at Youth Hostel

SOM: When did you see Dasara festival in Mysuru for the first time?

Dr. Manjunath: When I was five or six years old, my father Sri Chamarajegowda had brought me to Mysuru to watch Jumboo Savari procession and the Maharaja seated on elephant that passed through main roads of the city. Though I don’t remember the place from where I saw the procession but the face of Maharaja is still etched in my mind. In fact, my father was born during Dasara and because of this reason he was named as ‘Chamaraje Gowda’ as a mark of respect for the Maharaja of Mysore. Since then I have high regards for the Mysore rulers.

SOM: What about your days as student of Mysuru?

Dr. Manjunath: I completed by PU studies from Sarada Vilas College and did MBBS from Mysore Medical College (MMC). I also completed first year MD from Mysore and then went to Bangalore Medical College. As students, we have seen the Jumboo Savari in front of MMC and many a times got drenched in rain that occurred several times when the procession reached Ayurveda College Circle. Two years ago, I came to Mysuru with my 5-6 friends and walked on all illuminated streets like KR Circle, D.Devaraja Urs Road, Sayyaji Rao Road, Bannimantap for nearly two-and-a-half hours recollecting memories. I still remember about my relatives coming to Mysuru during Dasara festival to watch Jumboo Savari procession.

SOM: What is so special about this city that will attract lakhs of tourists to Mysuru every year?

Dr. Manjunath: One of the major things that attract visitors to Mysuru is Dasara and Mysuru royal family. The kings of Mysore never acted as autocrats and always thought about people’s welfare. They gained respect of every citizen through their deeds. At a time when India had not attained freedom, the Mysore rulers had started ‘Prajaprathinidhi’ sabha (on the lines of present Legislative Council) in which people from various sections of society, were made as members to   discuss about welfare programmes. I have never seen such benevolent kings anywhere in the world.

SOM: You are opening Dasara at a time when the pandemic has eclipsed Nada Habba. How do you feel?

Dr. Manjunath: It is true that COVID-19 has wreaked havoc in almost all countries. Understanding the gravity of situation, the State Government has decided to celebrate this year’s Dasara in a simple manner. As a doctor, I will appeal to people to be a part of Dasara festival by taking basic precautions like face mask, hand hygiene and social distancing. Crowd and COVID-19 go together. So, we need to be more careful. Avoid crowd as much as possible during Dasara. A vaccine is expected in next two months or sometime during the beginning of 2021. Till then we must be very, very careful.

SOM: What will be your attire for tomorrow’s inauguration?

Dr. Manjunath: In tune with tradition, I will be wearing the Silk panche  (dhoti), Silk shirt and Silk shalya and, of course, the traditional Mysuru Peta. On this occasion, I wish every one a Happy and Safe Dasara.

6 COMMENTS ON THIS POST To “Exclusive Interview: “Namma doctor” to open Mysuru Dasara-2020”