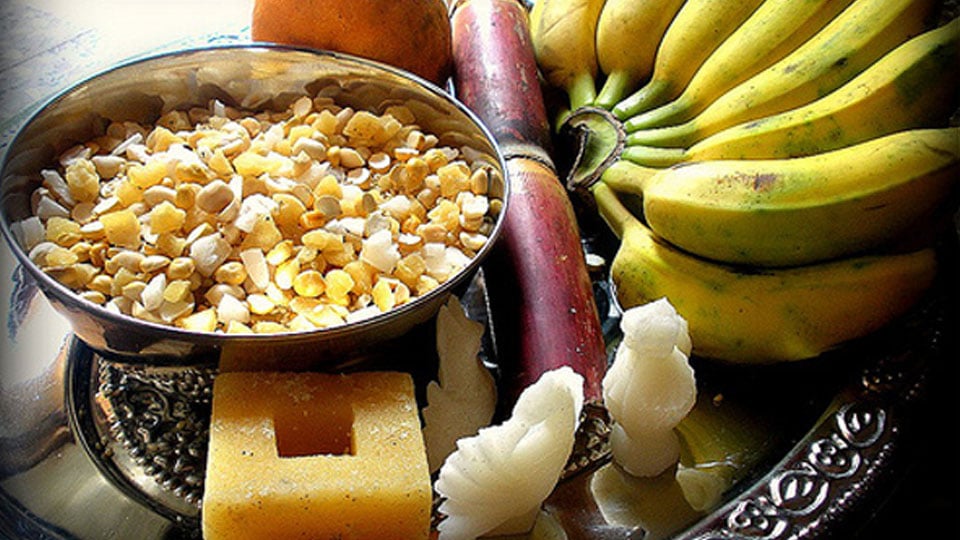 The significance of Makara Sankranti

Makara Sankranti also called ‘Uttarayana Punyakala’ is an important festival celebrated by Hindus. It is based on astronomical calculations in theory and is celebrated with unique practices. Beginning from ‘Makara Raashi’, the   Sun travels (it is earth that rotates, Sun is a static star) from South to North.

According to ancient tradition, this happens from Jan. 13 or 14 and ends on July 16 or 17 every year. This also heralds the end of Dakshinayana and commencement of Uttarayana. Thus it is an astronomical phenomenon but those who believe in Vedic practices consider this as an auspicious occasion and perform ‘tarpana’ (oblation to ancestors) through water and also repeat the ‘Gayathri Mantra’ and Surya Mantra.

It is believed that by doing so, people will get salvation (Moksha) in the next world and all happiness to themselves and to sons, grandsons and daughters. I remember my father was performing ‘tarpana’ and ‘Gayathri Mantra Japa’ for two or three hours. But these days younger generation dismisses this phenomenon as purely astronomical and hence no special significance should be attached.

However, these are individual beliefs and practices and should be left to individuals. Some persons or temples arrange a chariot procession of Sun drawn by seven horses. They consider this as a holy event in favour of Sun.

This is also called Makara Sankranti Punyakala and believers perform Vedic ‘Japas’ and ‘Parayana’. Thus it is celebrated in a variety of ways but the main purpose is to worship Sun. We worship Sun for giving us food and also thank him in anticipation of good things.

Sun will complete one round in 365.24 days and this is referred to as a Samvatsara or year. This has two parts. He moves towards North from Dec. 22 to June 21. This is called Uttarayana or northward movement. From June 21 up to Dec. 22 Sun moves southward and this is called Dakshinayana.

According to Panchanga, predictions of good and bad are made. As this year Sun enters into Mesha Raashi on Jan. 15 prices of all commodities go up. In addition to this there is a fear of war. Mahabharata has some interesting details regarding Makara Sankranti.

The doors of heaven will be thrown open on the day of Makara Sankranti. The grand old wise man Bhishma did not like to cast off his body and waited for Makara Sankranti to do so.

He had a gift that he could die whenever he wanted.    He retired on the bed of arrows and waited for the start of Uttarayana and once that day was set in, he cast off his physical body and went to heaven. However, this was possible for great men like Bhishmacharya and this may not be possible now a days.

Now coming back to Makara Sankranti day, children are made to sit on a wooden plank and parents or neighbours pour Elachi fruit (Ber or the Indian Jujube Tree) on their heads. It is believed that by doing so, bad effects of Makara Sankranti are warded off.

Another important custom is the distribution of Ellu (sesame seeds) to friends and relatives. Ellu is the symbol of Saturn or Shani and people are afraid of the problems created by Shani which normally will prevail for seven years. Hence it is prescribed in astrology to give Ellu and satisfy Shani and also ward off his  evil effects.

Generally, even the Vedic Brahmins are afraid of taking gift of Ellu and hence priest tells us to keep the Dakshina in double quantity. If Sun, Moon, Brihaspati are given Rs. 10 as Dakshina, Shani should be given double the amount.

People do not take sesame seeds and hence to mitigate the bad effects of Saturn, people mix it with groundnut pieces, dried coconut, jaggery pieces and Chickpea. This to a large extent minimises the effect of Ellu and people  accept them.

Earlier, the Ellu-bella preparations were made at homes but now we buy them from shops. In addition to the Ellu, people give sugar candy in different shapes, sugarcane piece and plantain. The candies are made in different shapes. These too were prepared at homes earlier with the help of wooden moulds. I doubt whether there are women who can  prepare them now.

Though the practices are different, the main purpose is to distribute and then eat it. The festival is called Pongal because the preparation should spill over the vessel and hence it is also called Pongal festival. Then some people observe Kanu festival also.

Actually it is harvest festival and thanksgiving is the main purpose of celebrating it by farmers. We all celebrate this festival to keep our tradition. There is also a proverb which states ‘eat Ellu and speak good words’ (Elluthinduollematanadu).