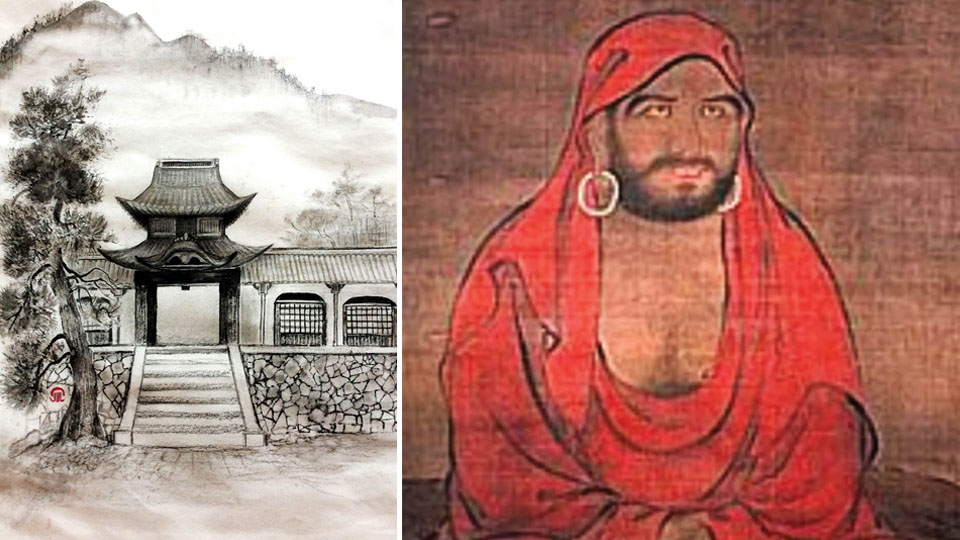 The Temple of Eternal Peace: The Eihei-ji Monastery, Japan

High in the mountains above the Sea of Japan [the East Sea], amidst lofty cedars is the “Eihei-ji Monastery” or “Temple of Eternal Peace” in Japanese. It is in Fukui Prefecture. Under curving tiled roofs and in timbered halls, the “Soto” school of Zen Buddhism is practised by the monks who live there.

During our posting in the late 1980s in the Indian Embassy, Tokyo, my husband and I travelled to Fukui from Tokyo. The highlight of the trip was a visit to the “Eihei-ji” Monastery, about 15 kilometres from that city.

We were accompanied by Kiyoko-San, a young woman interpreter in our Embassy.  She spoke good English and dressed fashionably, sometimes in the outré style of “Harajuku” [a Tokyo suburb favoured by young people]. Later, as she translated our interactions with the Abbots of Eihei-ji, we found a deep, insightful side to her character, belied by her stylish appearance.

Buddhism was taken from India to China by “Bodhi Dharma,” a monk who lived in the 5th or 6th century AD. The teachings spread to Korea and thence to Japan. In Japan, Bodhi Dharma was known as “Daruma.” One legend is that he came from the “Western regions,” the third son of the Pallava king of Kanchipuram in South India. In Japanese paintings he is depicted with a beard and large eyes.

A painting of Bodhi Dharma by an anonymous artist around 1260. It is considered a National Treasure in Japan.

Garbed in ochre robes, a fold of the material covering his head and hooked behind his ears, he bears a resemblance to the Seers of Kanchi. A painting of Bodhi Dharma by an anonymous artist of the Kamakura era [1260s] is considered a national treasure and is in the Kogakuji Temple in Yamanashi Prefecture. This painting is a copy of the original.

Dogen Zenji, a Japanese Buddhist priest, poet and philosopher [1200-1253 AD] founded the “Soto School of Zen” and established Eihei-ji as a training monastery in 1244. Some two hundred monks live there and follow its ancient teachings and practices. The complex contains about seventy buildings, surrounded by tall cedars [some said to be over six hundred years old]. A stream runs through the grounds. The ambience is one of peace and tranquillity. The meditation sessions, the core of the teachings, is called “Zazen” or “Sitting Meditation.” It is a discipline to help experience the present and its Reality.

The shaven-headed acolytes sit cross-legged on a cushion facing a wall to avoid distractions. They wake up at 3.30 am to practice Zazen in the Meditation Hall. A senior monk supervises with a stick in hand with which he may give a blow across the shoulders to a sleepy novice. Each monk is allowed one “Tatami” as a personal space to sleep and live, three sets of clothes and some bowls and chopsticks. A Tatami is a six by three feet frame, stuffed with rice straw and covered with matting like our own “chape” and an ornamental border. Tatamis are used as flooring in Japanese homes. The food is vegetarian. A typical meal would consist of a bowl of rice, soup, fried bean-curd, aubergine [brinjal] with sesame, pickled radish and carrots. Strong flavours like garlic and spring onions are avoided. Life is very austere with only two frugal repasts and manual work like polishing the old wooden floors or gardening. 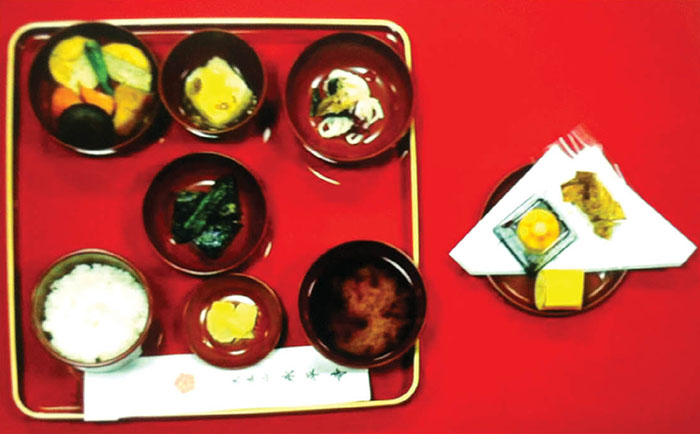 A young monk, who had drawn more water than he needed for the plants, hurried to empty his bucket back into the stream, obeying the precept that you must not take from nature more than you need! At Eihei-ji a strict rule is enforced that no water is to be wasted and every drop has to be saved.

The image of Bodhi Dharma is enshrined in the “Buddha Hall” and “Manjushri Bodhisattva” in another. There are clear connections to India. The Guardian of the Altar in the kitchen is Vishnu, named “Idasonten” in Japanese. Goddess Saraswathi also is revered in the Japanese Buddhist pantheon as “Benzaiten” or “Benten” for short. She is depicted with the “Biwa” or Japanese lute instead of a Veena. 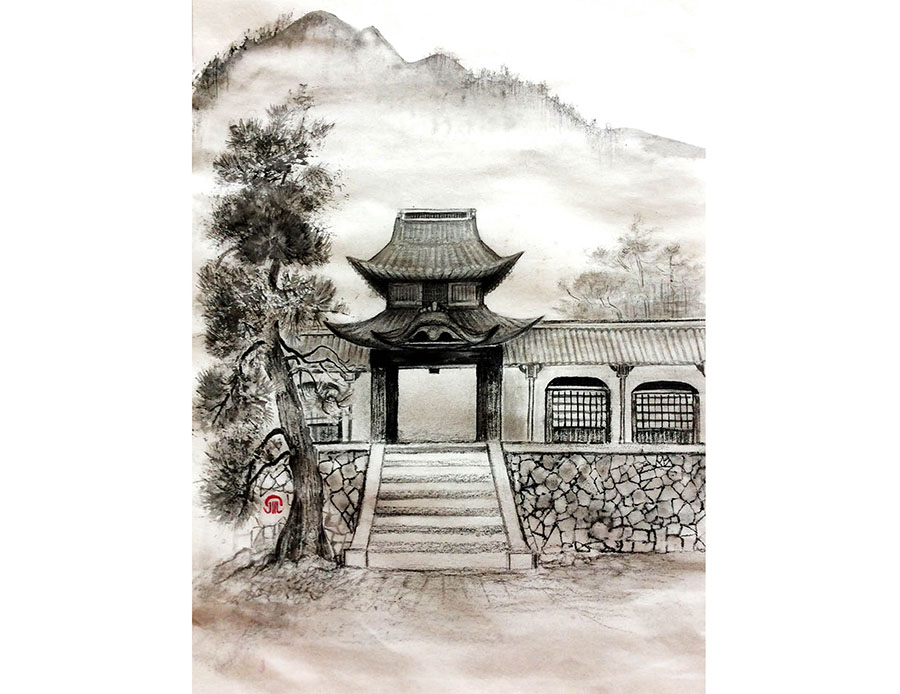 A Gateway at Eihei-ji (Sketch in ink by Girija)

A smiling Abbot answered our questions about Zen, translated by Kiyoko San.  Zen emphasises “emptying the mind of thought”, not thinking. Zen goes beyond religion and has no personal God. There is no separation between the Universe and the Self. Therefore, a prayer cannot be addressed to a particular God.

Such questions remained in the mind as we turned away from the hoary buildings and ancient trees of Eihei-ji. We marvelled that in consumer- conscious and affluent Japan we could find dedicated seekers, satisfied to live within the space of one tatami, with two meagre meals a day and a vision of the quest for truth before their eyes.

2 COMMENTS ON THIS POST To “The Temple of Eternal Peace: The Eihei-ji Monastery, Japan”