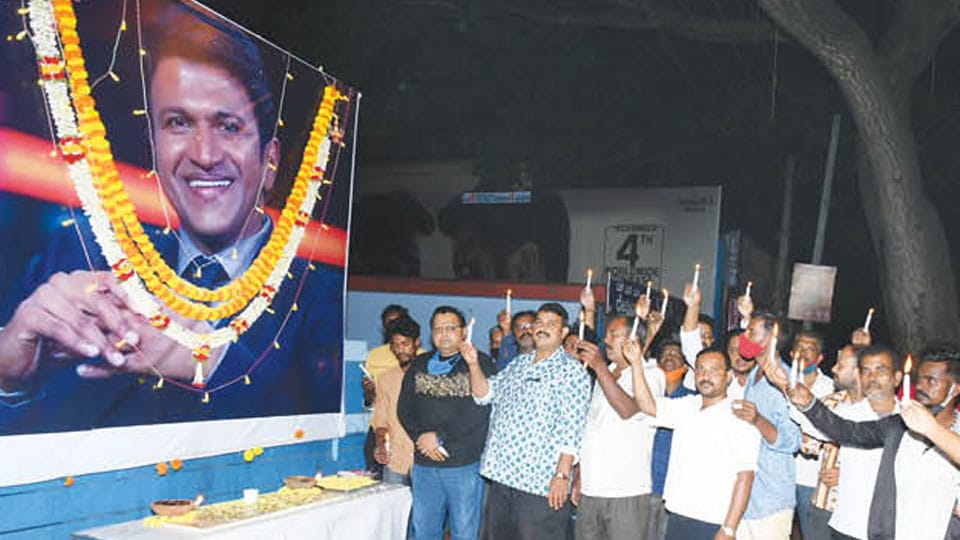 Bengaluru/Mysuru: Heartfelt condolences were paid to late Sandalwood actor Puneeth Rajkumar in all theatres across the State yesterday.

Condolence was paid to the late actor in about 66 Multiplexes and more than 550 cinema theatres across the State simultaneously at 6 pm yesterday. In Mysuru, tributes were paid in all theatres including Gayathri, Woodlands, Lido, Sterling and Sangam and at multiplexes including DRC, by offering floral tributes, lighting of lamps and playing of songs featuring the late actor, in which theatre owners, staff, cinema goers and fans of the Puneeth took part in large numbers. Also slogans  hailing the late actor, such as ‘Appu Amara’, ‘Appu Matte Hutti Banni’ rented the air .

Speaking to Star of Mysore,  Gayathri Theatre owner M.R. Rajaram, who is also the Karnataka Film Exhibitors Federation Vice-President said that tributes were paid to Puneeth Rajkumar who was one of the greatest actors of Kannada film industry. Recalling the social services and philanthropy of the late actor, he said that Puneeth always remains in our hearts and crores of Kannadigas.

Pointing out that several rare pictures of Puneeth Rajkumar will be exhibited along that of his (Puneeth) father Dr. Rajkumar in the theatre, he said that this is being done to ensure that Puneeth remains in the hearts of cine-goers forever.

DRC Cinemas’ proprietor C.R. Hanumanth said that we have expressed gratitude to the late actor who has made an enormous contribution for the growth of Kannada film industry. Maintaining that such a versatile and pro-social actor cannot be found in the future, he said that the film industry has prayed for Puneeth’s rebirth. ‘The  best tributes that  can be paid to ‘Appu’ is by realising his dreams of taking the Kannada film industry to much greater heights, both nationally and internationally and we will work with dedication and determination for achieving this,” Hanumanth added. Vaishali Hanumanth was present on the occasion.