Home » News » Thermal drones to track leopard on the prowl 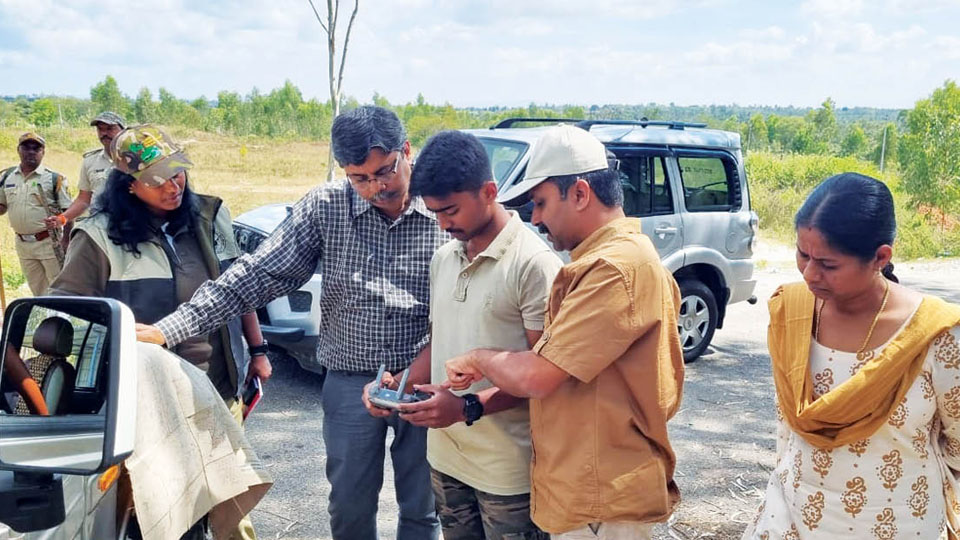 Thermal drones to track leopard on the prowl

Mysore/Mysuru: The Forest Department is setting up an advanced surveillance mechanism to track the elusive leopard that has already claimed the lives of two youths and terrorised the villagers in the rural belt of T. Narasipur. Except for two sightings in camera traps till now, the feline has not been sighted despite combing operations by over 150 Forest officers.

The Department has deployed one thermal drone to hover around the area to track the movements of the leopard. The drone or a quad copter is equipped with thermal imaging cameras and it can detect the radiation of the animals through infrared rays.

Forest officers told Star of Mysore that one more team that handles technologically advanced drones have come to Mysuru from Bengaluru and they will begin searching for the leopard by this evening. “They are equipped with night-vision thermal drones and we hope to see some good results,” Deputy Conservator of Forests (Territorial) K. Kamala Karikalan said.

The use of drones is aimed at effective monitoring and surveillance of the leopard at selected locations in a vast area that comprises over 40 villages. These normal image/video capturing drones and thermal sensing drones will be used with wireless networks.

In forest areas and on the fringes, activities during night remain high as compared to day and night vision through thermal cameras will help in monitoring activities more effectively. The cameras will provide a live feed of leopard movements, even in the covered area, she added.

These cutting-edge thermal sensing, thermographic cameras with remote zoom capabilities are being deployed in the critical areas where the leopard was sighted earlier and where it killed two victims. Officers who are combing the area said that the standing sugarcane crop in vast fields in almost all the villages continues to impede the search and surveillance operations as the area is a perfect place for the feline to take shelter.

“Now the Mysuru DC has ordered the crop harvest based on our request. Once the fields are clear of the cane crop, the feline will have no place to hide and its movements can be tracked easily,” officers said.

The Chamundeshwari Electricity Supply Corporation (CESC) has modified the duration of electricity supply to irrigation pump sets in T. Narasipur taluk in the wake of leopard scare.

Instead of the power supply in the night hours, the CESC has decided to ensure the supply in the daytime from today. According to a communication from CESC Superintending Engineer, the decision comes in the wake of the ongoing operations taken up by the Forest Department to capture the leopard, which is on the prowl in the taluk.

As per the modified duration, the 7-hour three-phase power supply to the IP sets will be provided for 10 days from 8.30 am to 6 pm. Alternatively, this will also prevent the farmers from venturing into their fields during night to switch on the motors to irrigate their lands.