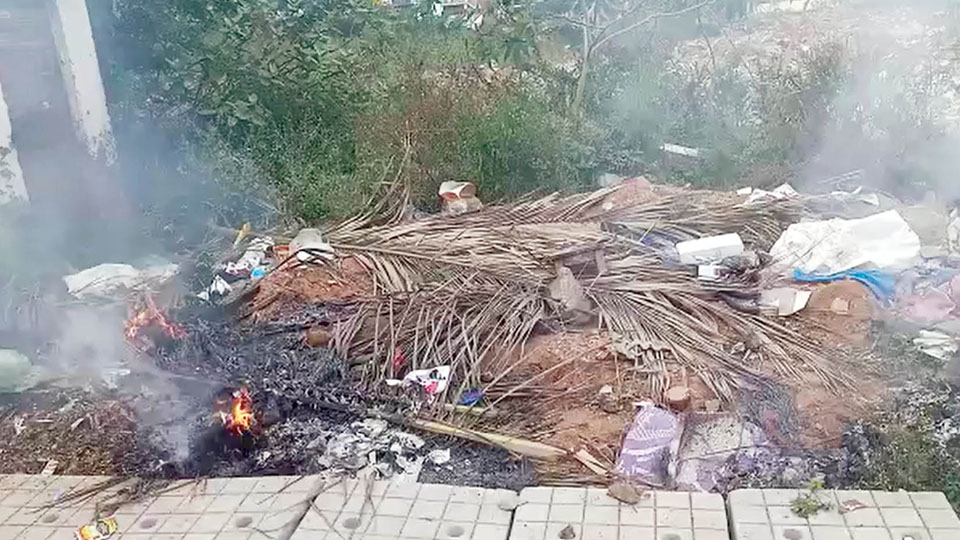 Mysore/Mysuru: Gardeners, residents and Pourakarmikas of the Mysuru City Corporation (MCC) are openly seen these days burning dry and fallen leaves and adding to the air pollution. It is a practice that is going unnoticed, posing severe environmental hazards.

Burning dry leaves is the easiest way of getting rid of them but the ill-effects on the environment are tremendous. The smoke from burning leaves contains toxic particles and gases which can accumulate in the lungs and cause respiratory diseases.

Moist leaves give off more smoke and are likely to contain chemicals called hydrocarbons some of which are known carcinogens. When the dry leaves are burnt, it gets mixed with plastic waste, which further adds to the thickness and toxicity of the smoke and releases carbon monoxide into the air.

While the menace is rampant across the city in many isolated areas and vacant sites, it is also concentrated in some thickly populated residential areas. Residents of Rajivnagar Second and Third Stage for example are fed up with this problem.

They told Star of Mysore that Pourakarmikas are collecting dry waste and instead of picking them up and taking them to compost units, they dump them in vacant sites and set fire early in the morning. “A thick smoke greets us by 7 am by the time we step out of our homes for a morning walk, said Saleem, a resident of Rajivnagar Second Stage.

In fact, yesterday morning, Saleem caught a Pourakarmika burning dry leaves near Surya Narayana Temple on the road that leads to Shabnam Shadi Mahal and then onto the Ring Road. “This is a day-to-day problem here and I spoke to our area Health Officer Srinidhi and she assured me of action and this menace would not repeat,” Saleem told SOM.

The issue was later reported to MCC Health Officer Dr. D.G. Nagaraj, who also promised immediate action. Residents of Rajivnagar Second Stage and its surrounding areas near the Ring Road said that there are many vacant plots near Narayana Hrudayalaya Hospital that are used by the Pourakarmikas to burn waste.

Nadeem Mohammed said that the residents of the area were facing this problem since years and the menace peaks during summer and winter every year. “They burn waste both in the morning and evening and we are choked. We tried complaining to the MCC Control Room but it was a futile exercise,” he said.

A residential and a hospital area

“There is a hospital nearby, where hundreds of patients come daily and there are thousands of houses in Rajivnagar 3rd Stage and many of them suffer from severe cough and many senior citizens and children have caught respiratory infections because of inhaling the toxic smoke,” Nadeem added.

Leaf smoke also contains hazardous chemicals such as carbon monoxide, which can mix with haemoglobin in the bloodstream and reduce the amount of oxygen in the blood and lungs. When burned, leaves emit a huge number of suspended particles and soot which settles in the lungs, worsening pulmonary diseases.

Another noxious chemical commonly present in leaf smoke is benzo (a) pyrene, which has been shown to cause cancer and is believed to be a major factor in lung cancer caused by cigarette smoke.

Breathing leaf smoke can irritate the eyes, nose and throat of healthy adults, can wreak havoc on small children and aggravate things for the elderly and people with asthma or other lung or heart diseases.

“I am a regular walker and I find people burning dry leaves thus polluting the calm and serene environment. Despite asking them not to do so, they continue with the practice which not only pollutes the environment but also causes health problems. The MCC must strictly order its staff and workers to put an end to this practice.” Saleem added.

2 COMMENTS ON THIS POST To “Burning of fallen leaves, waste going on unabated”