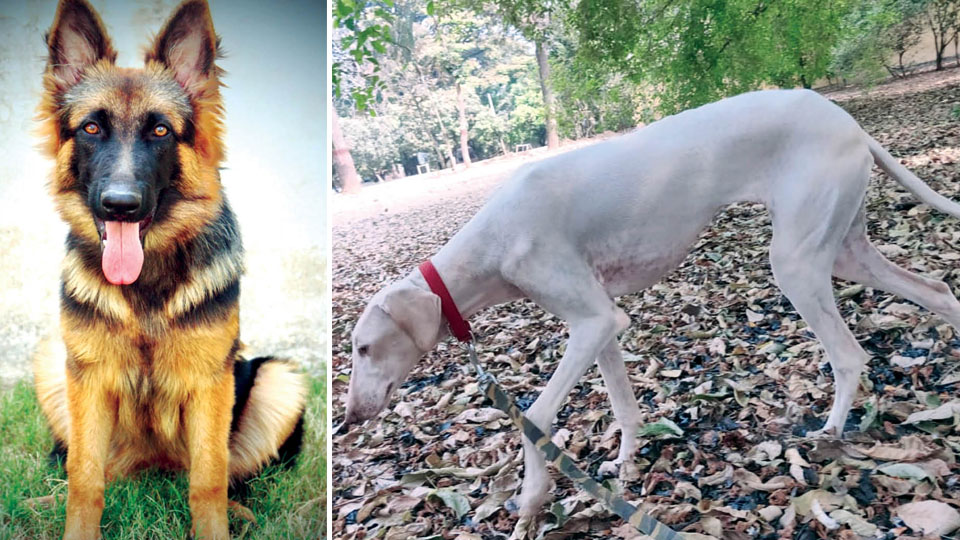 The dogs are Margi, a Mudhol Hound, that has landed at Bandipur after its rigorous training at the Dog Training Centre in the premises of Police Training School at Adugodi in Bengaluru and Jhansi, a German Shepherd, has been trained at Chandigarh by the Indo-Tibetan Border Police.

The training has been carefully designed to accommodate both basic obedience and detection skills specifically to combat the illegal wildlife trade. Basically, at Adugodi, two types of training are provided — bomb detection and scent training. Margi was predominantly trained in scent.

This is the first time Mudhol Hounds have been introduced in the Karnataka Forest Department. They have been chosen for its aggression and as they are a local breed from Bagalkot.

The dogs were taught to detect tiger and leopard skin, elephant tusk, skin and antlers of spotted deer and Sambar. The trainers used small-sized wildlife articles to accustom the dogs to find targets with low scent concentration in these complex environments.

Brought from Bagalkot as puppies

In fact, Margi was brought to Bandipur along with Rakhi when they were just three-month-old pups. Both were taken to Adugodi and provided training for seven months. While Rakhi was rejected due to an impediment on its foot, Margi successfully completed its training. Rakhi has not, however, been abandoned. The canine is being taken care of at Bandipur.

Wildlife sniffer dogs have repeatedly proved their merit in fighting against wildlife crime. Take the legendary Rana for example. Rana has been stationed at Bandipur Tiger Reserve and has played a key role in many such operations and is a nightmare to poachers.

Rana had caught them at their homes by following their scent from the jungles. It has solved many sandalwood smuggling cases and had tracked those who had escaped with the claws of Prince, a popular male tiger of Bandipur. Rana is retiring this month and Margi will replace him.

Many cases of wildlife seizures and poaching have helped in arrests of many criminals and in the recovery of body parts including skins and bones of tiger, leopard, bear bile, ivory, star tortoise, deer antlers, skins and meat, live birds, porcupine, pangolin scales, snares, traps and weapons.

Margi is being handled by Forest Watchers Mahesh and Nagesh. Mahesh has experience of handling canines since 2016. Margi is at present undergoing training at Bandipur and is getting acclimatised with the area.

Jhansi was trained at Chandigarh by the Indo-Tibetan Border Police and the exercise was supported by Traffic India. Forest Guard Basavaraj and Forest Watcher Siddharamanna have been trained to handle it. Jhansi will be attached to the Punjur Range and will be further trained to detect wildlife cases.