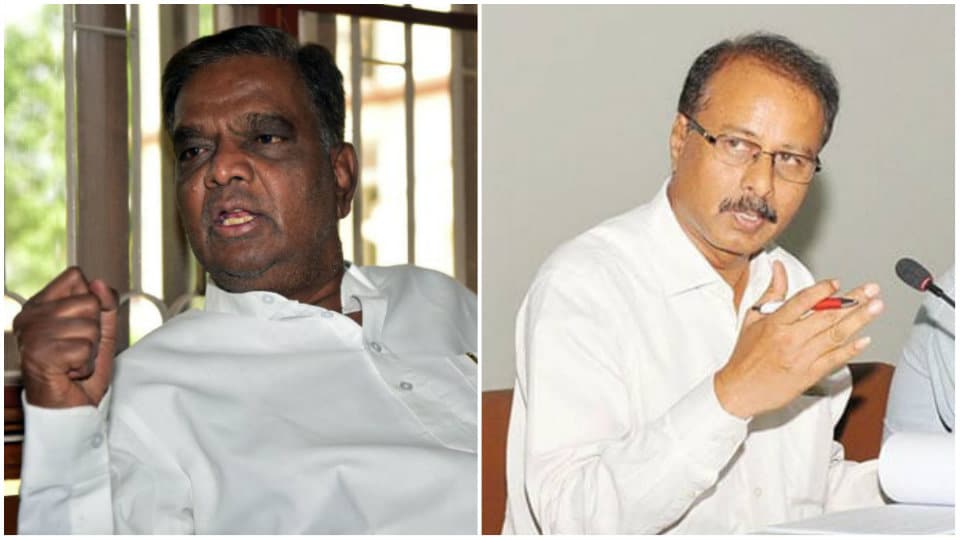 Out of the 13 polls he has contested so far, Sreenivasa Prasad has won seven times and lost six times while Dhruvanarayan has won four times and lost only once.

Prasad was elected to the Lok Sabha for five terms starting 1980 and to the Vidhana Soudha from Nanjangud Assembly segment (SC) twice in 2008 and 2013. Prasad entered politics by contesting as an AIADMK-supported Independent candidate from K.R. Assembly Constituency in the 1974 by-polls.

His second election was in 1978 when he unsuccessfully contested from T. Narasipur Assembly segment. Prasad later joined the Congress and won from Chamarajanagar (SC) Lok Sabha seat in the 1980 elections. He again won in 1984, 1989 and 1991. He again won in 1999 and became a Union Minister in the Atal Bihari Vajpayee-led NDA Government.

Prasad, who won from Nanjangud (SC) Assembly segment in 2008 and 2013, went on to became a Minister in the Siddharamaiah Government. However, he quit the Congress after he was dropped from the Cabinet in 2016 and announced his retirement from electoral politics following his defeat in the 2017 by-polls that ensued after he quit his Assembly seat. But now, bowing to the BJP High Command’s decision and the pressure from his fans and followers, Prasad has re-entered electoral politics and is going to contest on a BJP ticket from Chamarajanagar.

Dhruvanarayan contested the 2009 Lok Sabha polls on a Congress ticket and won. He again won in 2014 and is now trying his luck for the third time. Dhruvanarayan, who won by a huge margin of 1,41,812 votes in the 2014 LS polls, will be taking on veteran politician Sreenivasa Prasad this time and there will be no easy going for him as Prasad knows the art of electoral politics as a seasoned politician.

Also, BJP workers are elated that Sreenivasa Prasad is contesting from Chamarajanagar. In the 2009 Lok Sabha elections, BJP has given tough fight to Dhruvanarayan and the party candidate A.R. Krishnamurthy lost by 4,002 votes. In 2014, however, Dhruvanarayan’s victory margin against Krishnamurthy was 1,14,182 votes. With Narendra Modi wave, the BJP hopes that Prasad will win this time. BJP District President Prof. K.R. Mallikarjunappa says that they will work overtime to ensure Prasad’s victory.

BSP Factor: If this is the political scenario of Congress and the BJP, a third emerging factor is Bahujan Samaj Party (BSP) which cannot be ignored. It is a reserved seat and there is a sizable population of Dalits and Other Backward Caste people. If BSP puts up a strong candidate, there are likely chances of Congress and BJP votes getting split.

BSP has over the years emerged as a force to reckon with in the constituency and during the last Assembly election, N. Mahesh emerged victorious from Kollegal SC constituency. BSP leaders claim that the party has considerable presence in H.D. Kote, T. Narasipur and Varuna.

Sreenivasa Prasad not my ‘Guru’, says Dhruvanarayan: Kollegal, Mar.21- Maintaining that V. Sreenivasa Prasad was not his political ‘Guru’, Chamarajanagar Congress MP R. Dhruvanarayan has claimed that his ‘Guru’ was former Minister late Rajeshekarmurthy. Dhruvanarayan lashed out at former BJP MLA G.N. Nanjundaswamy for making baseless charges against him. Stating that Nanjundaswamy was making wild allegations out of frustration, Dhruvanarayan said that he does not want a certificate from the BJP and also he was not bothered about the allegations. Expressing confidence of winning the seat for the third consecutive term, Dhruvanarayan said that he was also not bothered about who would be his opponent.

Dhruvanarayan will file his nomination papers on Mar.25.

Speaking to SOM, State BJP Secretary M. Rajendra, who is also the party in-charge of Chamarajanagar, said Prasad has already started holding talks with party leaders and workers of all eight Assembly segments of the Constituency.

He will file his nomination papers at the Chamarajanagar DC’s office on Mar.26.