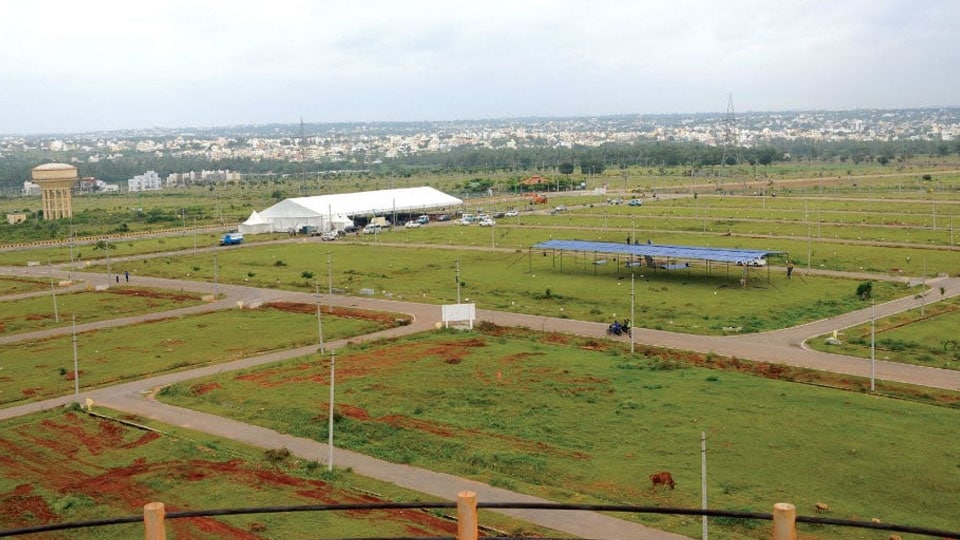 This ‘Telecom Officer’ gets 3 MUDA sites !

Mysuru: Controversies and Mysuru Urban Development Authority (MUDA) are two sides of the same coin. Every other day, MUDA is in the news for all wrong reasons either by making eligible site owners wait for decades or allot two or three sites to same person without verifying facts.

This duplication, though can easily be detected through technology, has not been found out till now raising suspicion about certain officials in MUDA who might be hand-in-glove with such people who claim Government sites, misusing or twisting the existing laws.

Here is the case where three sites were sanctioned in the name of the same person under Central Government employee quota. This fraud had not come to the notice of MUDA Officers since two decades. M.N. Ramakrishna, a Central Government employee, managed to get three sites from MUDA. The scam came to the light after RTI activist B.N. Nagendra obtained documents from MUDA.

Ramakrishna has affixed his date of birth as May 13, 1960 and has mentioned in three applications that he is the son of late H.S. Nanjundaiah. Ramakrishna, when he was 29 years old, had applied for a 30X40 site in March 1989 and paid Rs. 250 as registration fee to MUDA and filed an application — 12156.

Not stopping at this, Ramakrishna when he was 32 years old applied for another site in March 1992 (application number 145837 and registration number 125007). Here he had mentioned the date as Telecom District Manager.

According to RTI activist Nagendra, as per the documents obtained from MUDA, three sites — one each in Dattagalli Third Stage, Vijayanagar Fourth Stage and Devanoor Second Stage — have been sanctioned to Ramakrishna under Central Government employee quota in 1991 and 1994. There is no provision to allot sites in the name of a person, who already owns a site.

Ramakrishna has only paid Rs. 32,000 to MUDA and on its part, MUDA has sanctioned the sites and also given him lease-cum-sale agreement, possession certificate and No Objection Certificate, facilitating Ramakrishna to obtain loan from banks.

Impossible to own multiple MUDA sites

Nagendra said that it is impossible to get multiple sites without the involvement of MUDA officials. “Ramakrishna has given the same photographs at all the three application forms but mentioned different address. As per the documents, Vijayanagar site was allotted after five attempts and Dattagalli site was allotted after four attempts. But, in reality, the officials did not even verify documents and allotted the site illegally,” he alleged.

According to Nagendra, Ramakrishna has sold two sites and has applied for another new site. However, the documents are yet to be obtained, he said. As per the Karnataka Urban Development Authorities (allotment of sites) Rules, 1991, there is no provision to allot more than one site for a person.

Reacting on the case of three sites, MUDA Commissioner P.S. Kantharaju said that the issue has come to their notice and legal action will be taken.  “As per the documents, all the three sites are allotted under Central Government employee quota and it is illegal. Prima facie, it looks like a scam and a thorough probe will be conducted in this regard. Notices have been issued and the allotments of three sites will be cancelled and will be taken back. If any officials are found guilty, disciplinary action will be taken against them,” he said.