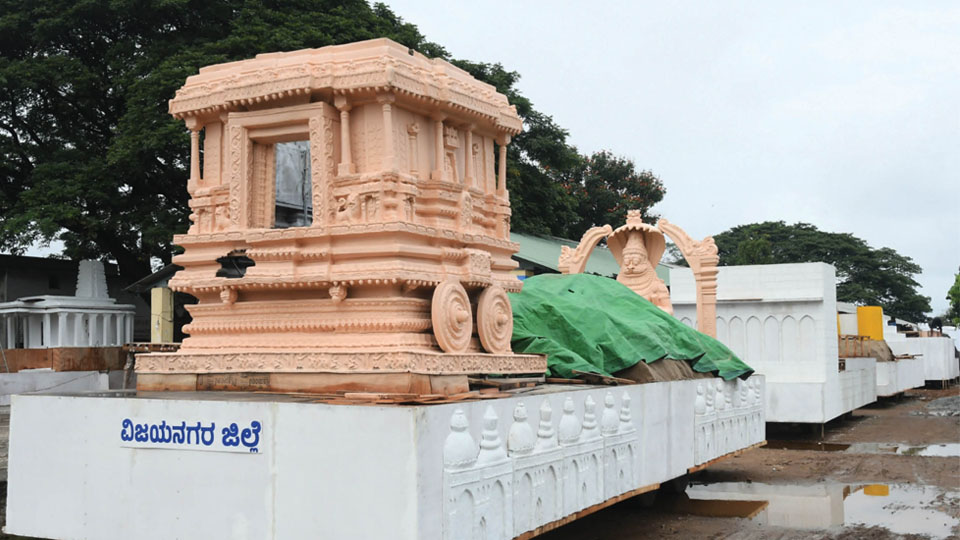 Mysore/Mysuru: As many as 43 tableaux including the Mudhol Hound of PM’s security force and Channakeshava Temple at Somanathapura will be featured in this year’s Dasara procession, popularly known as Jumboo Savari, said Dasara Tableaux Sub-Committee President Chandrashekar.

Addressing a press meet at D. Devaraj Urs Hall in Zilla Panchayat premises here on Wednesday, Chandrashekar said that there was only a few days left for Jumboo Savari and preparations of tableaux were going on in full swing.

Continuing, he said that the tableau of Channakeshava Temple of Somanathapura is being prepared by the Dasara Tableaux Sub-Committee at a cost of Rs. 10 lakh. The Sub-Committee is also readying tableaux of Aane Gaadi and Azadi Ka Amrit Mahotsav.

Works on 31 tableaux of various districts and also of various Boards and Corporations are also going on in a brisk pace, he said and added that 50 percent of the works have been completed and all tableaux will be completed before Oct. 3.

Pointing out that Karnataka’s Mudhol Hound has been added to the Prime Minister’s security squad — Special Protection Group (SPG) — Chandrashekar said that a tableau featuring the Mudhol Hound will be one of the attractions and added that the tableau was being readied by Bagalkot district.

A tableau depicting the pride of Mysuru city such as Chamundi Hill, Nandi Statue, Chamundeshwari Temple is also being readied, he said and added that tableaux of Kambala of Dakshina Kannada, Belur and Shravanabelagola of Hassan district, Brahmagiri Hill and Talacauvery of Kodagu district, Chamarajanagar’s wildlife sanctuary or Puneeth Rajkumar are also being readied.