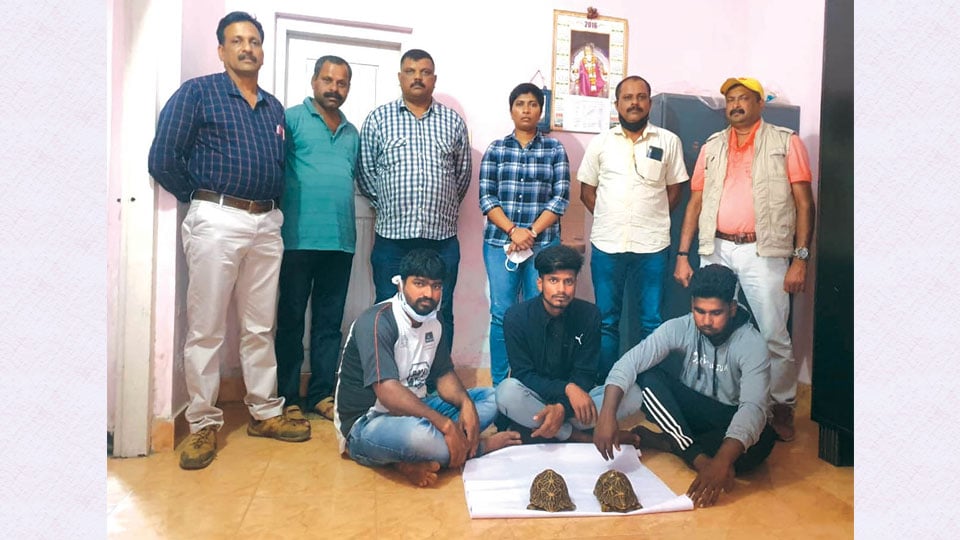 Virajpet: Virajpet CID Forest Mobile Squad personnel have arrested three persons who were attempting to sell two Star Tortoises, which have been listed as endangered and have rescued the tortoises from them besides seizing a car used for transportation.

The arrested are 20-year-old M. Ramamurthy of Kanakapura, 31-year-old V.K. Ramesh of Channapatna and 20-year-old B.N. Yogesh of Bherya in K.R. Nagar taluk.

On Feb. 24, the three accused, along with the two tortoises in the car (KA-42-A-6808) arrived near Chennangoli Bus Stop in Virajpet taluk at about 4.30 pm after travelling via Ramanagar, Channapatna, Hunsur and Gonikoppal.

Acting on a tip off, the Virajpet CID Forest Mobile Squad personnel conducted a raid, found two tortoises with them in the car and immediately arrested the three. During interrogation, the accused are said to have told the Forest officials that they had brought the tortoises to sell them for Rs. 50 lakh.

The accused were produced before a Court, which remanded them to 15 days judicial custody.