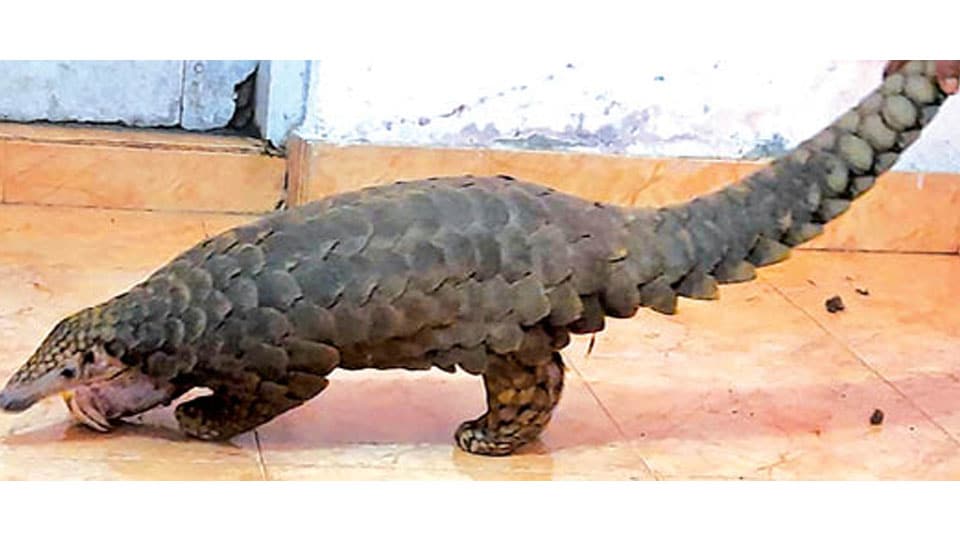 Virajpet: The Virajpet Forest officials have arrested three persons on charges of smuggling a pangolin (ant-eater) and have rescued the mammal besides seizing the Maruti Omni van used for transporting it.

The arrested are 28-year-old T.K. Ramappa of Hammiyala in Somwarpet taluk, 39-year-old L.N. Vasanth Kumar of Magge village in Sakleshpur taluk and K.B. Suresh of Alur in Hassan.

Acting on a tip off, the Virajpet CID Forest Mobile Squad personnel, intercepted the van (KA-12-N-6186) at Anandapura near Siddapura at about 10 pm on Sept. 24 and on inspecting the van, the officials found the pangolin in a bag, following which the accused were arrested.

Police said that during interrogation, the accused confessed of smuggling the pangolin to sell it, following which a case under Wildlife Protection Act was registered against the three accused and were produced before the Virajpet Civil Judge and JMFC Court. All the three accused have been remanded to judicial custody.

Pangolin: Known as scaly anteaters, pangolins are mammals wholly-covered in scales to protect themselves from predators. They curl into a tight ball and use their sharp-scaled tails to defend themselves when threatened.

Pangolins eat ants, termites and larvae and are often known as “the scaly anteater.” Because they have no teeth, pangolins pick up food with their sticky tongues, which can sometimes reach lengths greater than the animal’s body.

These scaly anteaters are one of the most trafficked mammals in Asia and are in high demand in countries like China and Vietnam as their meat is considered a delicacy and scales are used in traditional medicine. All eight pangolin species are protected under national and international laws and two are listed as Critically Endangered on the IUCN Red List of Threatened Species.