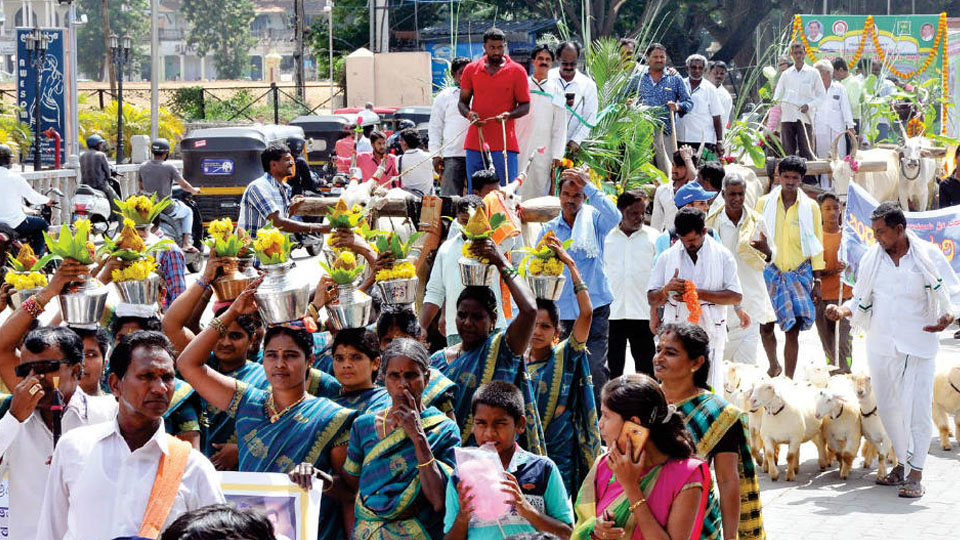 Mysuru:  The ten-day Dasara Celebrations also called the Nada Habba or people’s festival has many attractions. But the one that really is close to the people from rural areas will really have something to look forward to for three days from tomorrow —Raitha Dasara.

The stage is being set for the inauguration at JK Grounds near the City Railway Station. The farmers can look forward to being educated on modern agriculture implements, Israeli method of farming, zero investment natural farming and others.

The Raitha Dasara between Oct.12 and 14 will begin from the Kote Anjaneyaswamy Temple with the Puja Kunitha, Kamsale, Nandi Dwaja, Nagari, Karadi Kunitha and other folk troupes participating in a procession up to JK Grounds, said Raitha Dasara Sub Committee Secretary Dr. M. Mahanteshappa.

Agri Expo: There will be 30 stalls displaying agriculture and agriculture-related equipment. For the first time, in 15 stalls the Department of Animal Husbandry and Veterinary Sciences has organised the use of different breeds of cows for dairy farming and other cattle.

The other major attraction is the Matsya Mela organised by Fisheries Department.

For the women farmers, running with pots filled with water, lemon spoon race, three-legged race and frog race have been arranged.

Raitha Dasara
A game with a difference…: Dasara Heritage Treasure Hunt on Oct. 17
Take a virtual tour of Kuvempu’s ‘Kavimane’ at Dasara Exhibition