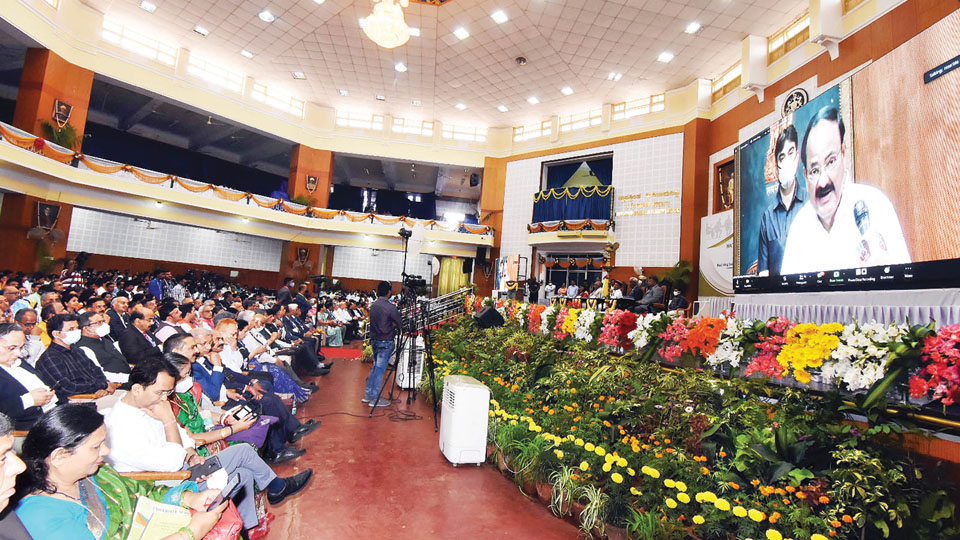 Mysore/Mysuru: A day after witnessing the 102nd Convocation, the University of Mysore (UoM) opened itself for a three-day National Conference of Vice-Chancellors this morning where Vice-President M. Venkaiah Naidu said from a virtual platform that the National Education Policy (NEP) 2020 was a step to make India a ‘Vishwaguru’ (Universal Teacher) in the education sector.

The Conference — 96th annual meet — is being held in Karnataka after a gap of nearly two decades and the University of Mysore is hosting a Conference of such a magnitude for the first time where over 300 Vice-Chancellors from Universities across India are participating in both online and offline mode.

University of Mysore, Association of Indian Universities (AIU) and United Nations are jointly organising the event and the theme of the conference is ‘Realising Sustainable Development Goals (SDGs) through Higher Education Institutions (HEIs)’. As part of the Conference, 96th AIU Foundation Day Lecture was also held.

While the inaugural event today was held at Crawford Hall, the sessions of the Conference will be held at Vijnana Bhavan. The Conference was inaugurated by Karnataka Governor Thaawarchand Gehlot who lit the lamp at the Crawford Hall in the virtual presence of the Vice-President.

Soon after the Governor’s address, UoM Vice-Chancellor Prof. G. Hemantha Kumar introduced the guests and after this, Vice-President Venkaiah Naidu began his address before he attended the on-going Parliament session. In his brief speech, Naidu appealed to all States to implement NEP 2020 with zeal to bring about transformation in the learning-teaching ecosystem.

“India was once a land of world-class Universities like Nalanda, Takshasila, Vikramasila and Pushpagiri and students from across the globe used to come here for education. India should regain such eminence again” he said.

Venkaiah Naidu asked the teachers to make learning a more interactive, immersive and enjoyable experience for students and stressed on the guru-shishya tradition to make education meaningful and holistic. “Teachers should inspire confidence in students and make them ready to face any adversity and walk the right path in any given situation,” he added.

“India was known as a knowledge disseminator once upon a time and was in the forefront of knowledge creation and sharing it with people from all over the world. We believe in sharing our knowledge for the well-being of humanity as we treat the entire universe as one family — Vasudhaiva Kutumbakam. Sharing and caring is at the core of Indian philosophy,” he said.

Hailing the role of academic institutions in sustainable education, Naidu said that the aim of education should not be just to find employment but it should enlighten our minds and make us aware of our culture and values.

Universities must become centres of knowledge creation in today’s era of knowledge. Exhorting youth to become aware, skilled and progressive while being creative & confident, he said, “Younger generation must contribute to nation building. India’s education system is third largest in the world with 1,050 universities, 43,000 colleges and thousands of professional colleges. I have a dream to see Indian Universities among top 10 Universities in the world,” he noted.

Equitable education: In his address, Governor Thaawarchand Gehlot said the NEP is a visionary document that aimed at ushering in much-needed reforms in the education sector to meet the demands of the 21st century. NEP 2020 lays special emphasis on vocational, pre-primary and primary education, improving quality of teaching, creative use of technology and flexibility and excellence in higher studies. “NEP stresses on value-based education and it is the onus of teachers, university administrators and academicians to show the right path. NEP focuses on skilling and reskilling and will promote sustainable and equitable education,” he said.

Before the Conference began, there was a welcome address and theme presentation by Dr. Pankaj Mittal, Secretary General, AIU. ‘University News: A Journal of Higher Education, and Book on Implementing National Education Policy 2020: A Roadmap’ (edited by Dr. Pankaj Mittal and Dr. S. Rama Devi Pani) was released on the occasion. Prof. R. Shivappa, Registrar, University of Mysore, proposed a vote of thanks.