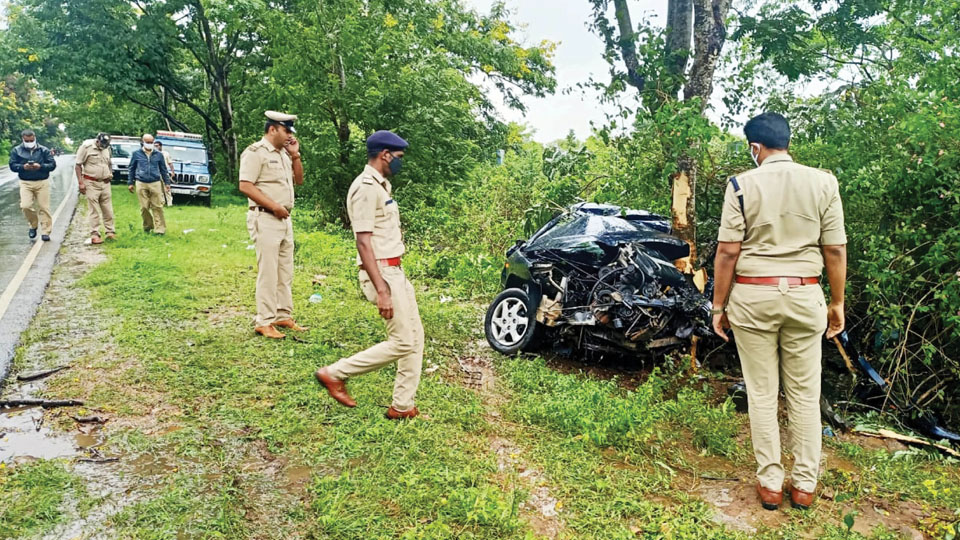 Three killed, many injured in separate accidents in Mysuru

Mysore/Mysuru: Three persons including a girl were killed and many others injured in separate accidents that took place in the taluk yesterday.

In the first incident, a 26-year-old youth and a 20-year-old girl were killed on the spot, when the car in which they were travelling rammed into a roadside tree between Jayapura and Harohalli in the taluk yesterday afternoon. Another youth, who was travelling with them has been seriously injured and has been admitted to a private hospital in Mysuru.

The deceased youth is identified as Mahesh. Both the deceased are residents of Vidyaranyapuram in city. The injured youth is 25-year-old Anoop.

It is learnt that all the three who were friends, had taken their friend’s car (KA-01-MB-5313) to go towards H.D. Kote. While returning from H.D. Kote, Mahesh, who was behind the wheels of the car, lost control of the vehicle between Jayapura and Harohalli and crashed into a roadside tree killing him (Mahesh) and the girl besides injuring Anoop seriously. The front portion of the car has been badly damaged.

The deceased is Chandramma (60), a resident of Udbur in the taluk.

Chandramma, along with 15 others had gone to another village for work and were returning to their village in the goods auto when the vehicle toppled, it is learnt. The injured have been shifted to a hospital.