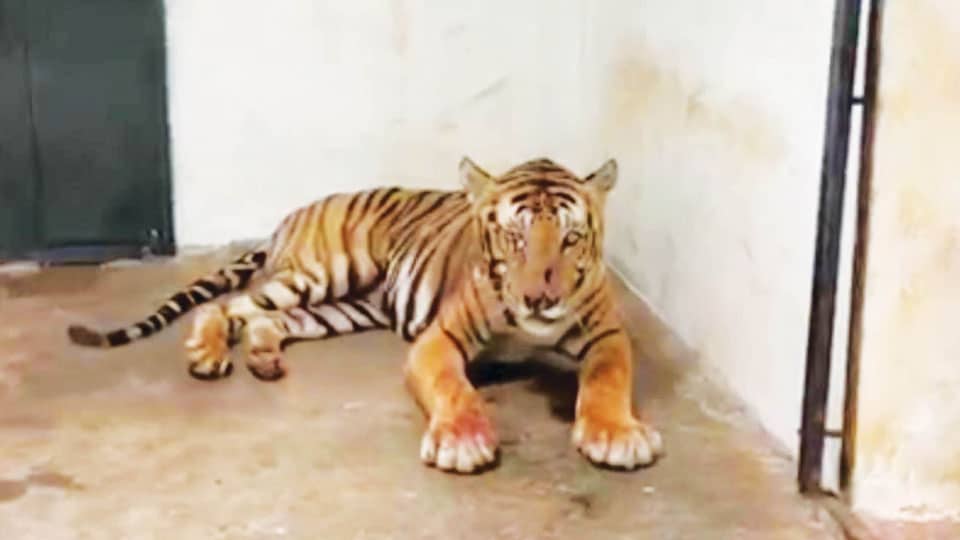 Tiger captured in Tamil Nadu being treated in Mysuru

Mysore/Mysuru: The tiger, which had killed four persons and more than 30 cattle head in villages bordering Masinagudi in Mudumalai Tiger Reserve in Tamil Nadu (TN), has been shifted to Mysuru Zoo’s Chamundi Animal Conservation, Rescue and Rehabilitation Centre in Koorgalli, where it is being treated for its injuries.

Mysuru Zoo Executive Director Ajit M. Kulkarni said that the tiger has been injured on various parts of its body including neck and face and was in a serious condition. Treatment began on the same night itself and the tiger had consumed two chicken, rabbit, he said and added that as the tiger is passing stools and urine normally, it shows that the digestion process is good but still the treatment is being continued.

Zoo Authority of Karnataka (ZAK) Member-Secretary B.P. Ravi, speaking to Star of Mysore, said that to provide treatment and rehabilitation to injured wild animals, a rehabilitation centre was established on the outskirts of Mysuru city a decade back. Eight tigers have been rehabilitated here and it is for the first time that a tiger from other State has been sent for treatment, he added.

It may be recalled that the tiger, aged about 10 years, had created havoc in villages bordering Mudumalai Tiger Reserve adjacent to Bandipur Tiger Reserve. It had killed four humans and 30 cattle heads in a month. The tiger which was seriously injured in a territorial fight used to attack bike riders and cattle grazers which had led to villagers expressing anger on the TN Forest Department, which had issued a shoot order.

Wildlife enthusiasts and environmentalists had opposed the shooting of the tiger and had moved the Court. The TN Forest Department took up the operation to capture the tiger live since 20 days and had also sought the help of Rana, the sniffer dog of Bandipur and its handler Suresh Kalkakar Mage to trace the elusive tiger. On Oct. 14 evening, the tiger was traced, tranquillised, captured and was shifted to the rehabilitation in Mysuru for treatment.