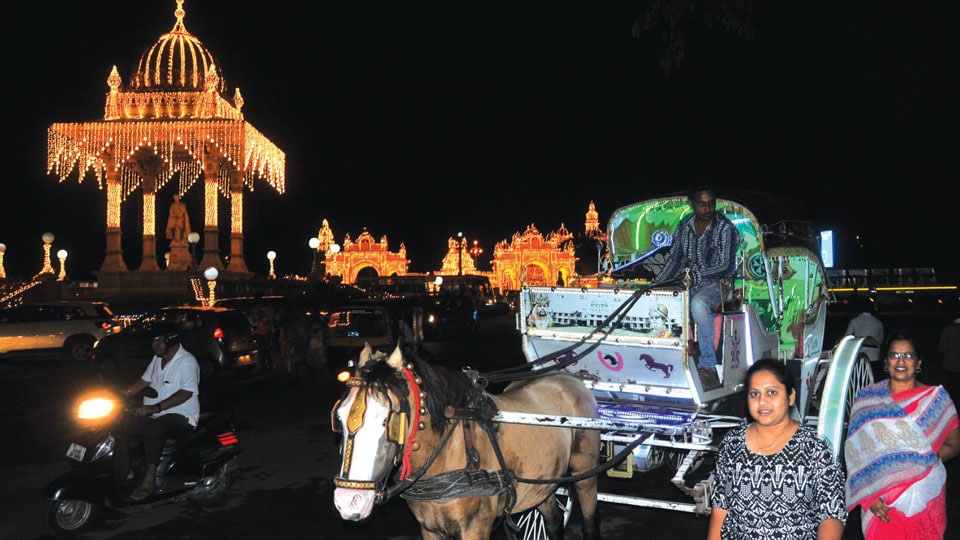 Tongawalas to get uniforms that reflect royal culture

Mysuru:  Department of Tourism has decided to distribute a pair of new uniforms and turbans to select 50 tongawalas in city for Dasara. The uniforms will reflect royal tradition started by the Maharajas and will be given to the members of Shah Pasand Tonga Association. The historic Tongas and Sarots are an integral part of Mysuru  tourism industry.

Earlier, the State Government used to distribute new uniforms and turbans to tongawalas and provide them an honorarium of Rs. 10,000 every Dasara as part of tradition and recognising their role in promotion of tourism activities in city. However, the previous Government stopped such a practice and the reason given was that these tongawalas come from an unorganised sector and they are not affiliated to any formal association. There are nearly 150 tongawalas in Mysuru.

Following reports of stopping such a facility to the tongawalas, this year, the Department of Tourism has now come forward to distribute new dresses and turbans from this year. Accordingly, 50 such tongawalas will sport new uniforms.

There are over 12 Sarots and over 45 Tongas that operate within the city limits. While a Sarot has four wheels and can carry 8 persons, the two-wheeled Tonga can carry four persons. A Sarot is pulled by race horse while a Tonga is pulled by a small horse.

Speaking to Star of Mysore, Deputy Director of Tourism H.P. Janardhan said the Department has taken steps to distribute new uniforms to 50 tongawalas before the commencement of Dasara. State Tourism Minister S.R. Mahesh will distribute them soon. However, he clarified that a decision to distribute honorarium for tongawalas was yet to be decided by District Administration and Dasara Executive Committee, he said.

Reacting to the decision of distributing uniforms and turbans, President of Shah Pasand Tonga Association Faiz Ahmed expressed his gratitude to the District Administration and said that an honorarium of Rs. 10,000 would mean a lot for tongawalas.

“We want the State Government to take measures to promote traditional Tongas and protect the welfare of our families which depend on the Tongas. Earlier, the government used to offer a subsidy for buying Tongas, but, it has been stopped from the last few years,” a tongawalla said.

Out of the small income they get, tongawalas have to feed the horses and it nearly costs them Rs. 150 to Rs. 300 depending on the size of the horse. “We hardly make two or three trips a day and only at a time when the Mysore Palace is illuminated. For one round of the illuminated Palace, we charge about Rs. 250 to Rs. 300,” he said. Earlier, the government used to offer Rs. 2,000 to take up repair works but now the practice has been stopped, he added.