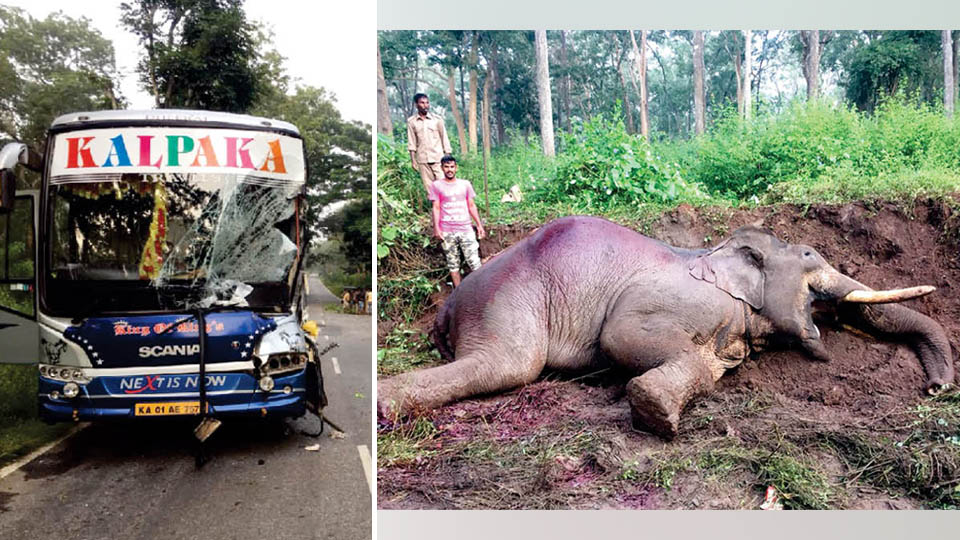 Hunsur:  The grand plans of Forest Department to train elephant Ranga in the next three years for Dasara received a major setback today as Ranga was knocked down by a speeding bus that was heading from Kerala to Bengaluru. The impact of the accident was such that Ranga’s spinal cord was broken and he was flung from the main road to a slope by the side of the road.

The incident occurred at around 2 am in the vicinity of Mathigodu Elephant Camp (under Nagarahole National Park) that is famous for giving many Dasara elephants including the earlier Howdah elephant Balarama, Abhimanyu and Drona.

According to Mahouts and Forest Department Officers, Ranga is usually let out from the camp for grazing in the nights as there won’t be much traffic.

Yesterday, as usual, the chains that were tied on its feet were removed at around 9 pm and was allowed to go out of the camp. In the wee hours, the speeding private bus, owned by Kalpaka Travels, that had left Kannur and was heading towards Bengaluru, hit Ranga and broke its spine. There was a foot-long injury on its back with protruding bones. A part of the bus too was damaged.

Hearing the groans of the elephant, Mahouts and Forest Department Veterinarian Dr. Mujeeb rushed to him and tried to pull Ranga with the help of other elephants so that it could stand. But Ranga did not budge and continuously groaned due to pain. Later, it succumbed to injuries.

Forty-five-year-old Ranga, earlier known as ‘Rowdy Ranga’, was captured in Ramanagaram as he used to raid crops and harm human beings. He was a terror in Ramanagaram, Manchanabele and surrounding areas along with another elephant Sidda who died in December 2016 after being stuck in slush for more than a month.

After capturing Ranga, he was brought to Mathigodu and was tamed. Forest officials were training him for Dasara and still one year was left for the training to be completed. He was fit as a fiddle and was an ideal new-generation elephant for Dasara, Department officials said. His death has cast a pall of gloom at Mathigodu elephnat camp.

Mahouts and villagers alleged that buses, especially private buses coming from Kerala, travel in break-neck speed and kill many wild animals. “There are many buses that travel on this road in the night and they compete with each other to reach their destinations faster so that they can do multiple trips. There are no road humps to prevent speed,” they said.

Also, the Mathigodu Elephant Camp, despite being a reserved forest, has turned a picnic spot with tourist vehicles stopping there to see and click pictures. Sometimes, tourists are allowed to venture close to elephants, said villagers.