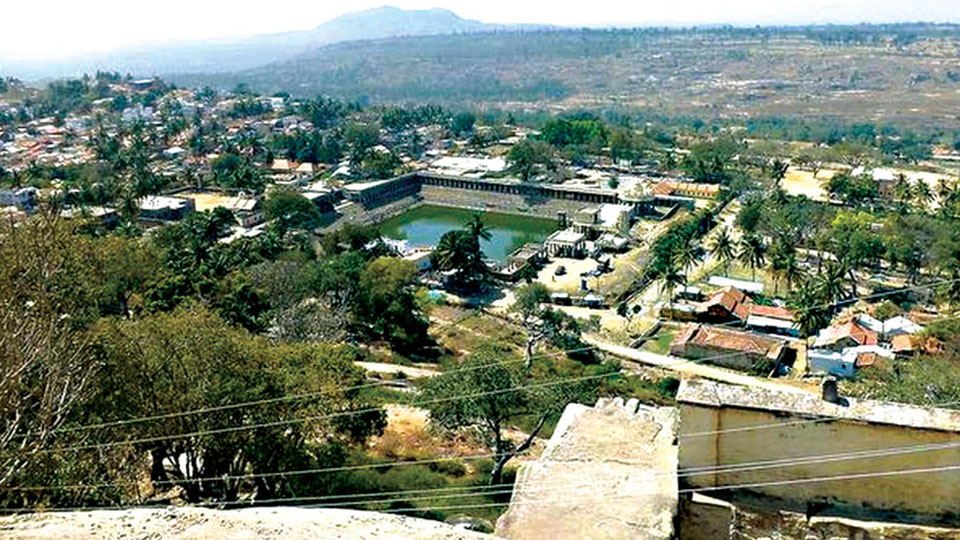 Tourism Department to rope in private players to develop Melukote

Bengaluru: Melukote, the 12-century-old temple town, abode of Lord Cheluvanarayanaswamy and a renowned centre for Sanskrit learning, in Mandya district located at a distance of 130 kilometres to capital city Bengaluru, will soon to be developed as a tourist spot by State  Tourism Department with the help of private players.

The Dept. has planned to hand over the development and maintenance of this temple town and restoration of various heritage sites to Infosys Foundation, which had already revived and restored the lot of Kalyanis, historic lakes  and heritages sites in Bengaluru and other parts of State.

Sources in the Tourism Department told that the Department evinced interest, favoured the Infosys Foundation to adopt and develop Melukote. Tourism Minister S.R. Mahesh is said to be keen on developing this heritage site and likely to sign a Memorandum of Understanding (MoU) with the Foundation. Moved by the interest of the Tourism Department, Infosys Foundation Chairperson Sudha Murty has also shown interest to adopt and develop the town.

According to sources, Sudha Murty was also interested to clean up and restore Dodda Kalyani near Cheluvanarayanaswamy Temple in Melukote and Akka-Tangi Kola near Yoganarasimha Swamy Temple which are currently maintained by Muzrai and Archaeology Department. Though Sudha Murty has not officially discussed about adopting Melukote, she is said to have expressed her displeasure on pathetic condition of Kalyani and badly maintained ponds in archaeologically significant temple town which she had visited during this year Dasara celebrations. The Foundation had already restored two such temple ponds — Vasantha Vallabharaya Kalyani at a cost of Rs.9 crore in Bengaluru and Lakmehswara Temple Kalyani at the cost of Rs.5 crore in Hubballi. People used to defecate all around these ponds and throw dead bodies before the restoration work. 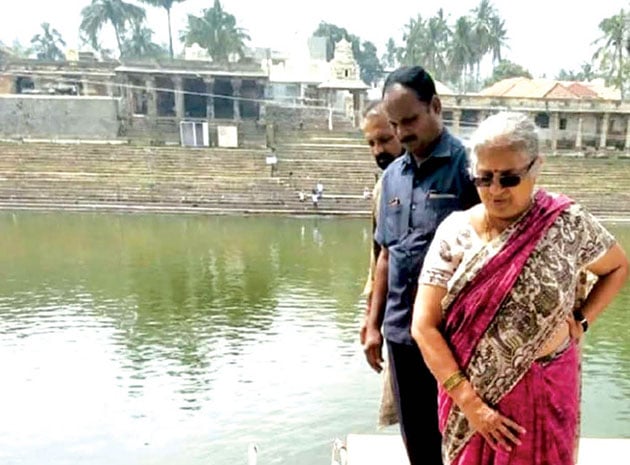 Infosys Foundation Chairperson Sudha Murty during her recent visit to the temple town.

Murty is also ready to develop Melukote Ponds without fixing any entrance fee if the local people and temple authority cooperate with the Foundation.

It may be recalled here that the State Government constituted an authority to preserve this town and declared it a heritage site in 2011. Seven years on, nothing has been done to preserve the heritage of this centre that attracts around 10 lakh tourists every year.

Even the Mandya District Administration had submitted an integrated development plan to the State Government in July 2015 at an estimated cost of Rs.500 crore for improvement of this heritage spot that has a history of more than 1,000 years according to historians.

It is believed that Ramanujacharya, one of the proponents of Vishishtadvaita Vedanta philosophy of life, is said to have lived in Melukote town. The State Government had neither rejected nor approved the plan submitted by the District Administration.

A central monument in temple town Melukote dates back to the 12th century. Apart from some famous temples and rock formations, there are also line drawings belonging to ancient times. Pots and pans excavated here are said to be about 3,000 years old according to historians.

Melukote, which is  popular for its Vairamudi Utsava and Teppotsava, has temples, mutts, choultries, mantapas, colleges, ancient Sanskrit schools and Ramanuja Koota. The town’s water source is natural tanks, kalyanis, open wells and step wells, including the famous Akka-Tangi Kola. Most importantly, Melukote is famous for its Iyengar cuisine — puliyogare is the hallmark which is distributed as prasada at the temple.

The town has a protected monument, Cheluvanarayanaswamy Temple, which has been a prohibited and regulated area. In the regulated area, a look at the street study throws up interesting observation — Brahmins, weavers and farmers have separate lanes; less perforated walls mark the lanes connecting the clusters; Jagli is a private space and common spaces are shared by clusters of homes.

Mixed-use buildings with shops on the ground floor and residences on the first floor have been developed in recent years.