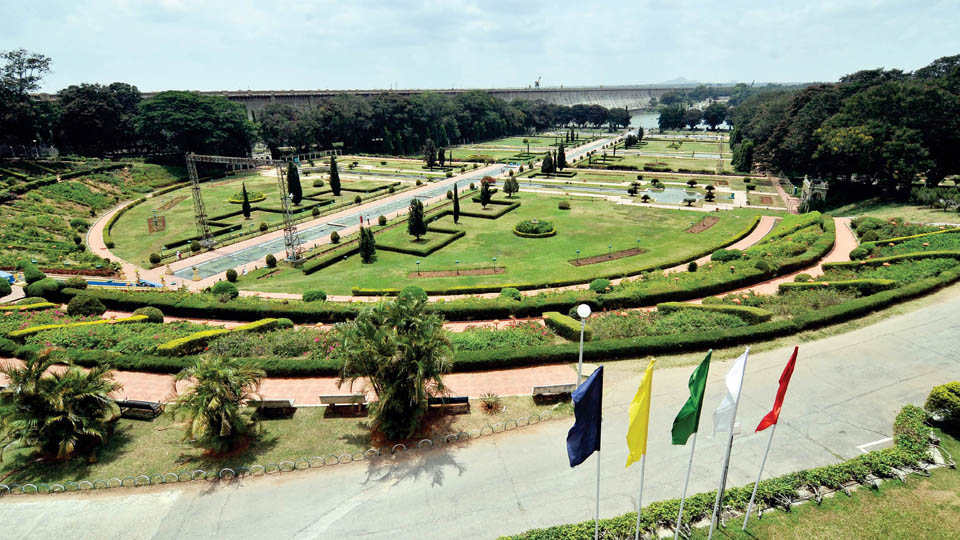 Mysuru: Tourism Minister S.R. Mahesh has announced that the Brindavan Gardens at Krishna Raja Sagar (KRS) Dam will be developed and he has already spoken to Water Resources Minister D.K. Shivakumar to give a new look to the popular tourist destination.

Speaking to reporters during an interaction organised by Mysuru District Journalists Association (MDJA) at Pathrakarthara Bhavan yesterday, he said that there has been no positive changes in the design and structure of the Garden.

“The same Garden and Fountains exist since the days of Nalwadi Krishnaraja Wadiyar. The only addition has been the musical fountain. The fountains I had seen as a child can be seen even today. The place has seen no improvement. At least now, the Garden should be redesigned and renovated for a refreshing look for a memorable experience for tourists,” he said.

The Minister told Star of Mysore this morning that the previous Congress government had got a proposal from the officials of Cauvery Neeravari Nigam Limited (CNNL) to give the dam a complete makeover at an estimated cost of Rs. 1,300 crore. “We will examine the proposal and revive the project under Public-Private-Partnership,” the Minister said.

As part of the beautification plan, a 312-ft statue of Goddess Cauvery will be constructed with a base of 120 ft. and other attractions include a wide and attractive Fountain, a Boating Pond, Children’s Park, Maharaja Mantap, Penguin Park, Doll Museum, Laser and Light Show, Street Park on the lines of Hoysala architecture, Food Court, architecture depicting historical monuments, Botanical Garden, Aroma Park, Arch Entry Gates at the South and North entrance to the dam and a Bonsai Garden.

It may be recalled here that the CNNL had asked Jaipur-based Sincere Architects and Engineers Private Limited to prepare a Detailed Project Report (DPR) on the beautification of Brindavan Gardens. Accordingly, the company prepared the DPR and it has been sent to the State government for approval. The total project cost is Rs. 1,300 crore. But it failed to take off under the previous government led by Chief Minister Siddharamaiah.

On an average, over 10,000 tourists visit KRS every day and the numbers see an increase during Dasara and peak tourism season. Once the beautification project is completed, the Brindavan Gardens can attract over 30,000 to 50,000 tourists per day.