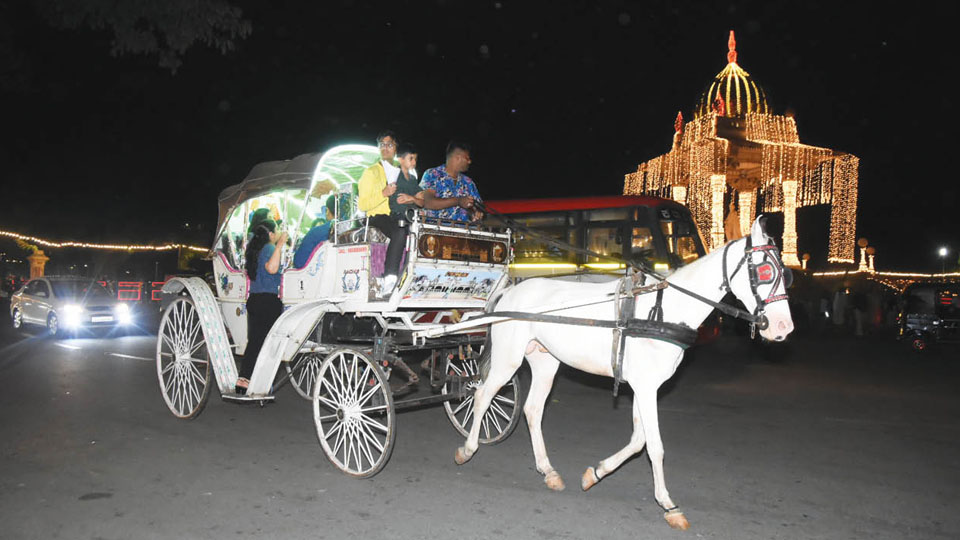 Many hopeful that illumination may be extended

Mysore/Mysuru: Mysuru has always been known for its tongas and the old Mysureans have been familiar with the hoof sounds of the horses pulling tongas.

During Dasara, these tongas and chariots are beautifully decorated with LED lights and are lined up near Palace, Dasara Exhibition Grounds and nearby tourist spots to attract tourists, who had come to witness the cultural extravaganza organised during the 10-day Dasara festivities which concluded with Jumboo Savari and Torchlight Parade.

For two years, Dasara festival was celebrated in a simple manner and the Jumboo Savari was held inside the sprawling Mysore Palace premises. With the State Government deciding to celebrate Dasara in a grand manner this year, lakhs of tourists had arrived in city. Though the festivities concluded with Jumboo Savari on Vijayadashami day (Oct. 5), the city is still crowded with tourists who are visiting many attractions associated with Dasara.

One among the attractions is the tonga ride around the illuminated city which attracted a lot of tourists. They were seen taking the tonga ride and viewing the illuminated roads and heritage buildings. This year’s grand Dasara celebration has brought a smile on the faces of tongawallas, who had taken a beating owing to COVID pandemic last two years.

“Tongawallas are indeed happy this year and are earning more than Rs. 1,000 a day by taking tourists on a ride around the city,” said Mysore Tongawallas Association President Fayaz Ahmed.

Many tourists, impressed with the ride, have also paid more money voluntarily, he said and added that if the illumination is extended for a few more days, it would be very helpful for the tonagawallas.

Meanwhile, Mysuru Hotel Owners Association President C. Narayanagowda, speaking to Star of Mysore, said that booking of rooms has come down by 25 to 30 percent from today but rooms have been booked on weekends.