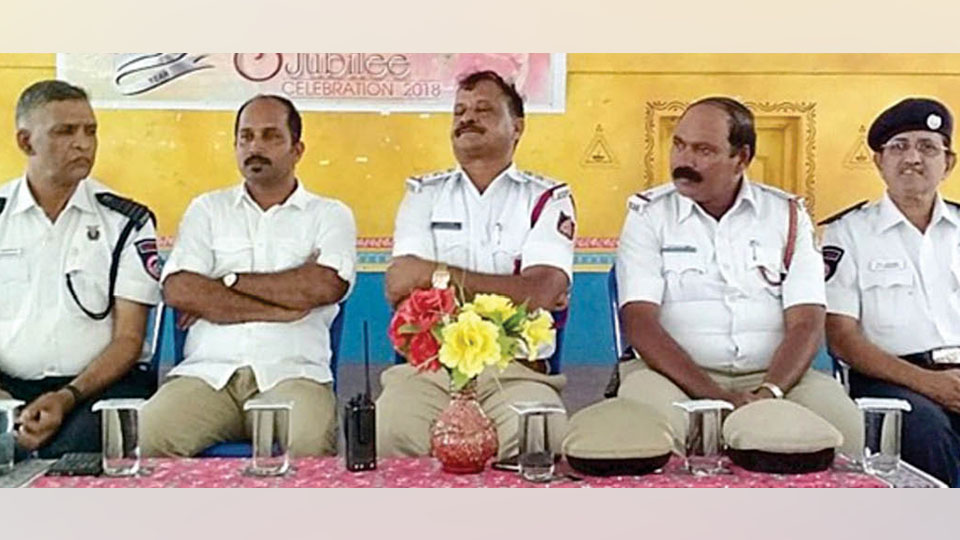 Mysuru:  K.R. Traffic Police Inspector Manjunath advised the students not to drive two-wheelers till they attain the age of 18 and obtain driving licence and not to go triple riding which is a violation of traffic rules.

He was addressing the students of Maharishi PU College as part of the Traffic and Road Safety Month organised by the Traffic Wardens, in the college premises here recently.

Deputy Chief Traffic Warden Subramanian asked the students to follow traffic rules and practice self-discipline irrespective of whether the Police is present at the signals or not and safeguard their young lives.

He also brought to their notice that the youth aged between 18 and 35 are unnecessarily becoming victims to these accidents due to traffic violations which has to be controlled.

A video of various accidents leading to serious injuries and death as recorded in the CCTV at various traffic junctions in Mysuru were screened to bring to their mind the result of traffic violations.

He also stressed that driving by youth below 18 years without licence and causing accidental deaths would result in their parents being penalised by hefty fines and even jailed if fines are not paid.

Traffic Warden K.V. Ramanath invited the students to actively participate and help the Police to avert accidents by uploading photos of traffic violations whenever they come across such incidents on roads through public eye on the internet. This will help the Police Control Room to issue penalty notices to the errant drivers.

Principal Mahadevaswamy, thanked the Traffic Wardens for extending an educative programme to the students, the benefits of following traffic rules and the evil of violations in traffic rules. Over 200 students participated in the interaction that   followed.

Awareness programme was also conducted for the students of Acharya Vidya Kula,  Yelwal, who assured to follow the road rules.

Similar programmes are planned this month at various colleges and schools in the city, according to a press release from the Mysore Police Traffic Warden Organisation.