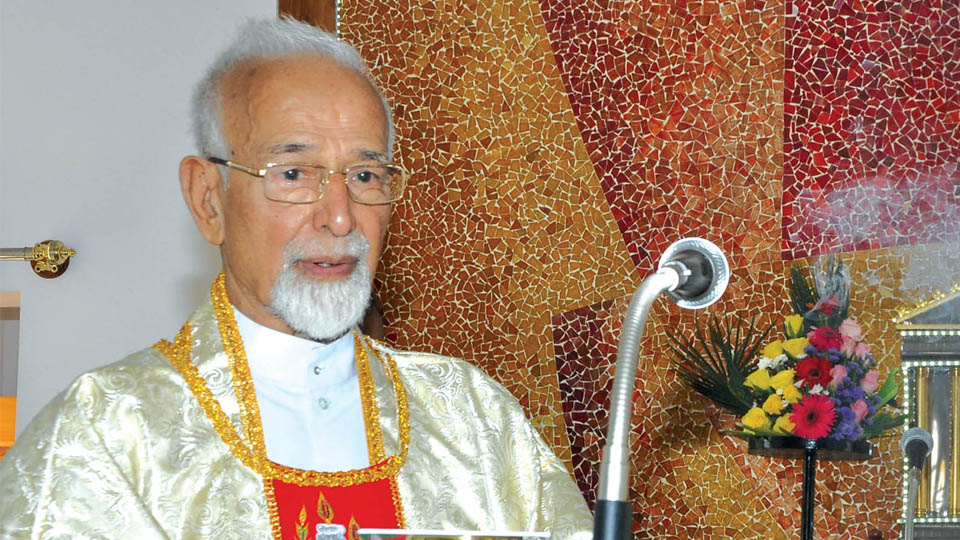 Tribute to Fr. Denis Noronha: A Priest of a Different Kind

He was also the Vice-President of Hindu-Muslim Souharda Samithi, Mysuru; Parish Priest of St. Philomena’s Church for seven years; Senate member of Mysore University; Secretary of Mysore Diocesan Education Society (MDES) for two Degree Colleges, two Junior Colleges and 30 High Schools; Member of the Governing Body of MDES and the Parish Priest of St. Antony’s Church in Suntikoppa, Kodagu, before retiring from service. Fr. Noronha traversed not only time but also the hearts of many who came in contact with him.

Though Fr. Noronha came from a humble agriculturist family, he decided to cultivate human beings and make them bloom as noble souls which made him a priest of a different kind and a household name in Mysuru city. He was a Priest who took God to people in the form of health, education and service.

Fr. Noronha, who had a long connection with Mysuru city, was ordained as Priest at St. Joseph’s Cathedral, Mysuru, on April 8,1957.  Joining the Seminary in city at a tender age of 13 in the year 1945, Fr. Noronha also climbed his way up the Church hierarchy as a Model Priest. Fr. Noronha had said building or running of schools was not a great thing. Greatness was in building a dedicated, honest and hard working band of teachers. He had said Jesus Christ never built schools or colleges, but he believed firmly in training his disciples to serve mankind.

Fr. Noronha, as the Financial Administrator (Procurator), moved into the Bishop House in 1960 which was a turning point in his career as a Priest and also a turning point for the Diocese of Mysore itself. It comprised (then) of six districts of Mysuru, Mandya, Kodagu, Hassan, Chikamagalur and Shivamogga. He held three main posts namely — Financial Administrator, Diocesan Director of Social Work and Secretary of the Mysore Diocesan Education Society.

Due to the posts he held, he had a lot of people coming to him throughout the day and he used to patiently hear them and tried his best to help them all in their requirements.

Fr. Noronha would often go out of his way only to help the poor, the downtrodden and the needy to bring them to the mainstream of society. He helped many either with money, by getting them jobs, or at least by directing or recommending them to right persons.

The habit of reading good books and magazines in order to keep himself up-to-date with present day developments in the world made him a ‘SELFMADE MAN.’ Fr. Noronha had close contacts with late Sri Balagangadharanatha Swamiji and was closely associated with Sri Shivarathri Deshikendra Swamiji of Suttur Mutt. Fr. Noronha used to give lectures at ‘Sarvadharma Sammelana.’

Fr. Noronha, who retired as Parish Priest on Jan. 12, 2014, at the age of 82, was staying at ‘Prashantha Nilaya,’ a Retirement Home for Priests of Mysore Diocese at St. Joseph’s Hospital premises in Bannimantap. At the Home, he spent his day by meeting patients in the hospital, comforting or sometimes counselling them and by reading books.

Fr. Denis Noronha was indeed a visionary priest, who held the whole world as one family. No wonder, the name Fr. Noronha was a byword in almost every household in city.