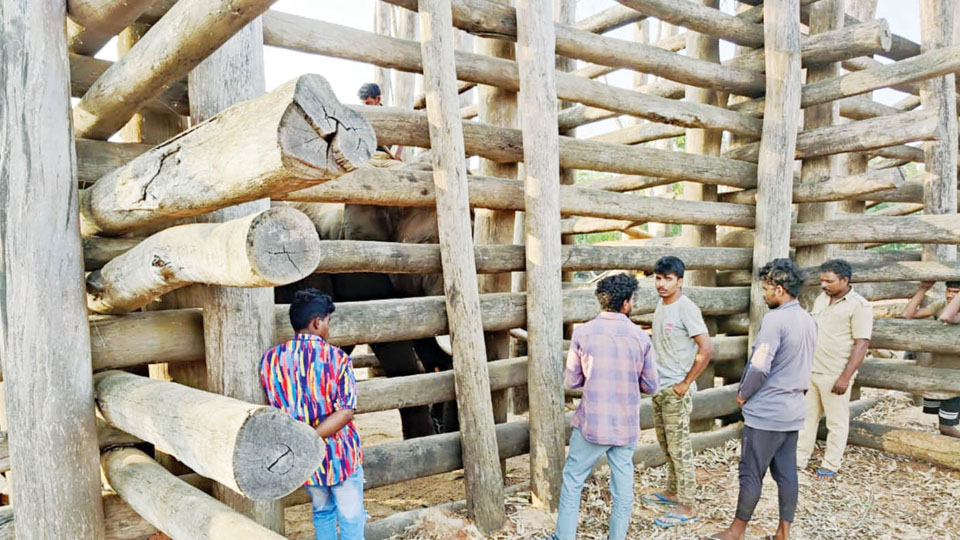 Kushalnagar: Kusha, the 27-year-old male elephant that went missing from Dubare Elephant Camp in Kodagu district, has been put in Kraal now. Kraal is a wooden log enclosure into which elephants are driven to be tamed and Dubare Camp has many such Kraals.

Kusha, in a ‘Musth’ condition, had ventured into the forests after breaking his heavy chain one-and-a-half years ago in search of a mate and had not  returned. He was caught last week and was brought to Meenukolli. Being separated from its mate using force, Kusha was showing unruly behaviour and this is the reason why it has been put into a Kraal.

Here, Kusha will be tamed to adapt to the requirements of the Forest Department like patrolling, Kumki or safari purpose or even to capture other wild elephants that are unleashing terror in human habitats.

Kusha has been caged in wooden Kraal whose strength is much more than that of the elephant. He was pushed into the Kraal with the help of other elephants. Kraals are made of strong wooden logs of eucalyptus which are difficult for an elephant to break. His rigorous training has begun and according to Department officials, Kusha is showing resistance as the earlier training has faded from his memory.

After escaping from the Dubare Camp, Kusha had stayed in the wild for too long. Usually, elephants leave the camps in search of mates but would return after some time — post-mating season. But Kusha did not return and he has actually become a wild tusker.

“Earlier he was a no-nonsense elephant and now he has turned naughty. Moreover, he is angry as he has been forcibly separated from his female companion. His movements show resistance and he is actually dangerous if left in the wild and might attack humans,” said Kushalnagar Range Forest Officer Ananya Kumar.

He said that Kusha has lost up to 200 kg weight roaming in the wild but he is healthy. “He has forgotten his Mahout’s basic commands and is not obeying orders. Usually, we keep a wild elephant inside the Kraal for six months and this too depends on the behavioural change in the pachyderms. Kusha, I think we will keep for a month or so and its sufficient time for him to remember the commands or re-learn them,” Ananya Kumar said.

Kusha has settled down in the Kraal. While the elephant is showing mild signs of distress, it is not aggressive. “We are feeding green fodder and water to the tusker and are also giving it minimum food. Its health condition is good,” he added.

During the course of taming, other female elephants in the camp will be brought near Kusha who would try to touch and befriend him. As he makes friends, the next stage of the training would be teaching him visual commands and sounds, said a Mahout.

Elephants Kusha and Lava were caught during an operation at Betekadu in Virajpet taluk four years ago and both were tamed at the Dubare camp by Mahout Mani and Kavadi Ravi. Now Mani and Ravi are again in-charge of Kusha.