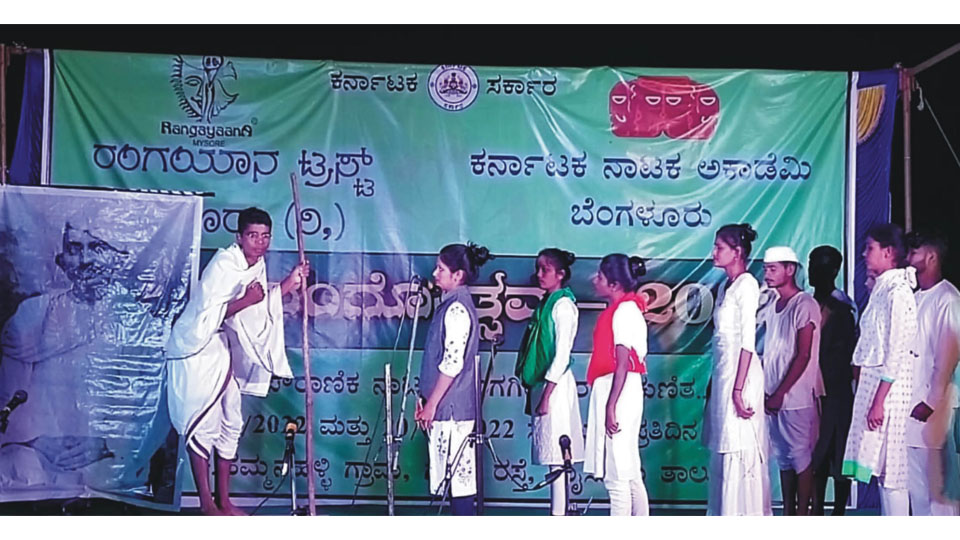 Mysore/Mysuru: The two-day ‘Graama Rangotsava-2022,’ a rural  Theatre Fest organised by the city’s Rangayaana Trust, in association with Karnataka Nataka Academy, Bengaluru, at K. Hemmanahalli on Bogadi Road in the taluk, concluded on Sunday.

Speaking after inaugurating the Theatre Fest, MLA G.T. Devegowda said that the Fest aimed at spreading the fragrance of theatre to rural areas.

Pointing out that Mysuru is known as the Cultural Capital of the State, he said that the erstwhile Mysuru rulers promoted art, literature, music, theatre, folklore and the like to a great extent.

Regretting that the love for theatre is dwindling by the day, thanks to modern gadgets such as mobile phones, Devegowda called for involvement of children and women folk for popularising the theatre even in rural areas.

Lauding the Rangayaana Trust for holding the event, he opined that the real strength of the theatre lies in rural areas.

Mysore Paints and Varnish Limited (MPVL) Chairman N.V. Phaneesh said that our country has multiple forms of theatre, which perhaps no other country in the world has.

Pointing out that theatre plays a major role in taking forward our rich culture and heritage, he said that it is easier to understand things by listening, rather than by reading them. Likewise, learning by seeing will be much more effective, he said adding that the theatre embodies hearing, seeing, understanding, feelings and the like.

Regretting that the present generation has developed a tendency  to look at easier ways to earn name, fame and money in quick time, no matter by whichever means, he lauded Rangayaana for involving tribal youth and children in the theatre as part of an effort to bring them to the mainstream society.

Maintaining that it is the rural population which takes the lead in nurturing and sustaining theatre, he once again lauded the  Trust for taking theatre to haadis, hamlets and other remote parts.

The first day (Feb. 19) programme saw rendering of theatre songs followed by staging of the play ‘Ogatina Rani’. Another play titled ‘Swatantra Sangrama’ was staged later in the day.

The second and concluding day of the event, featured an almost 9-hour play titled ‘Sri Shivakumara Mattu Valli Parinaya,’ in which more than 35 rural artistes took part. The play which began at 2 pm, ended at 10.30 pm, with harmonium providing most of the background music.