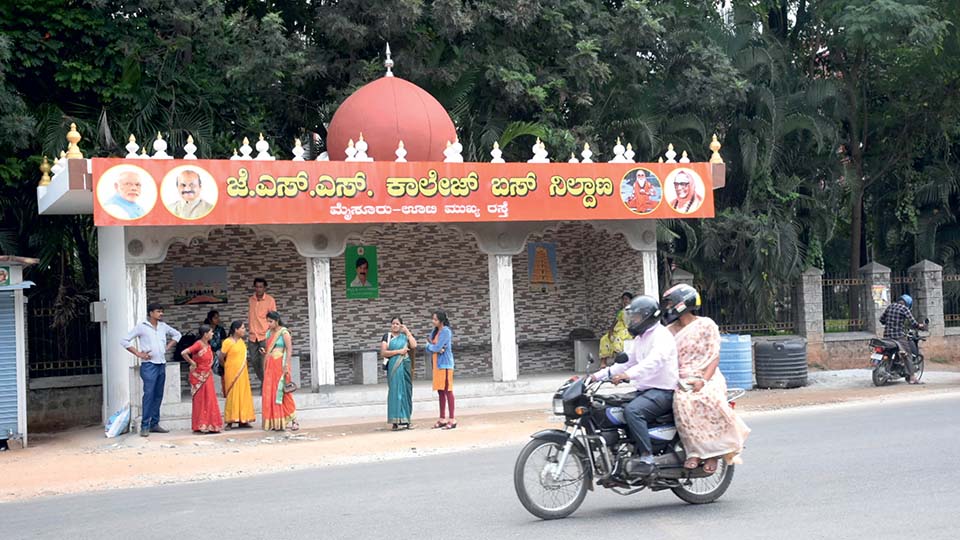 Mysuru: Following the controversy regarding the construction of domes atop bus shelter near JSS College on Ooty Road in city, the two smaller domes on the bus shelter has been removed, while the larger one at the centre has been retained.

KR Constituency MLA S.A. Ramdas, in a press statement issued today (Nov. 27), said that he has been engaged in development of his constituency as per Prime Minister Narendra Modi’s mantra of ‘Sab Ka Sath, Sab Ka Vikas’. Maintaining that he has been carrying along everyone without  any discrimination based on caste, creed and religion lines for the past 30 years of his political journey, Ramdas said that no controversies had arisen in his path thus far.

“I had started to construct 12 bus shelters in the constituency for the benefit of citizens, out of my MLA funds. Mysuru is a heritage city and the first sign of it is the famed Mysore Palace. I had planned to construct the bus shelters based on the Palace model. But unfortunately, the model took a religious turn and became a raging controversy, which has caused a lot of pain to me. As such, I consulted  elder citizens and other personalities on the issue, following which I took the decision to remove two smaller domes atop the bus shelter, while retaining the larger dome at the centre, so as to put an end to the controversy. In future, the bus shelters will be constructed based on this model (with only one dome at the centre), for which approval has been obtained. I would also like to say again that working for the public is my mantra and as such, the members of the public should not think otherwise about me. I seek the blessings of everyone for all the development works that I undertake for my city and the State,” Ramdas  said  in the press release.