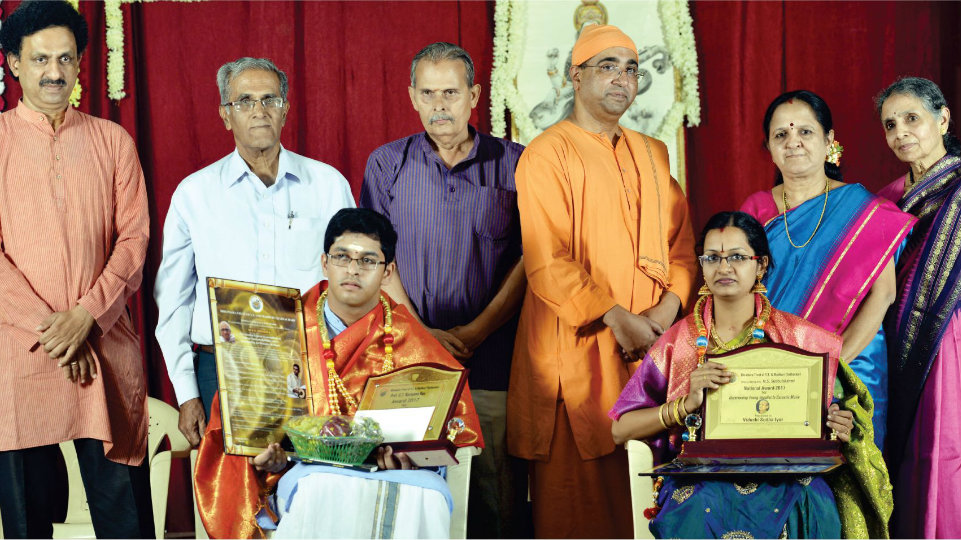 Bhramara Trust of Y.T. and Madhuri Thathachari is quietly doing a yeomen service to the society. Helping many poor students, adopting  schools with only basic facilities, honouring scientists and artistes for their lifetime achievements, conducting concert competitions to promote young talents are only a few to mention. It also identifies outstanding young instrumentalists within Karnataka in Karnatak music and  honours them by presenting ‘Prof. G.T. Narayana Rao Award’. Winner of the concert competition is bestowed with ‘Bharata Ratna Smt. M.S. Subbulakshmi Award’.

These two awards were recently given (24.3.2018) to two young artistes at a glittering function at Alwar Kala Bhavana. Young vocalist Sudha Iyer of Chennai and young mridangist Sunaada Krishna Amai of Mangalore received M.S. Subbulakshmi and Prof.G.T. Narayana Rao awards respectively. Sudha Iyer is both a vocalist and violinist. Her mother is one among the ‘Mayavaram Sisters’. At present, Sudha is working as a guest faculty in Kalakshetra of Chennai, has Master’s Degree in Sanskrit and Music, M.Phil –  study and translation of Harikeshanallur Mutthaiah Bhagavatar’s work titled ‘Srimat Tyagaraja Vijayam’. She is currently pursuing her Ph.D.

Sunaada is both a mridanga player and a vocalist. He is pursuing B.A. at Mylapore Sanskrit College. He has already accompanied Senior artistes like O.S.Tyagarajan, Neela Ramagopal, Trichi R. Thayumananvan and many more. Winner of many prizes and awards, he is undoubtedly a promising mridangist of Karnataka.

Swami Atmajnanandaji, President of Sri Ramakrishna Ashrama, Mysuru, presided over the function and gave the benediction. Vidushi Koviladi  R. Kala and Vidwan S.Sudarshan were the guests of honour.

A concert by Sudha Iyer followed the award function, accompanied by her sister Srividya Iyer on the violin, Sunaada Krishna Amai on mridanga and M.R.Manjunath on ghata. Though a short concert, she made the best use of the opportunity. Starting from the Varna ‘Sarasijanabha’ in Nata, she  gave a brief introduction of Aarabhi and sang Muthuswamy Dixitar’s ‘Ganarajena rakshitoham’ with a frill of kalpana swaras. A quick rendition of Tyagaraja’s ‘Niravadhi sukhada’ (Ravichandrike) led to a good exposition of Hindustani Kapi by both the sisters.

Srividya was good on the violin. Sunaada’s powerful beats kept following throughout. Another evergreen composition of  Tyagaraja ‘Intha sowkhya’ was soothing and melodious. The popular Devaranama of Purandara Dasa ‘Kande na Govindana’ and a Thillana in Hamsanandi brought the curtains down.