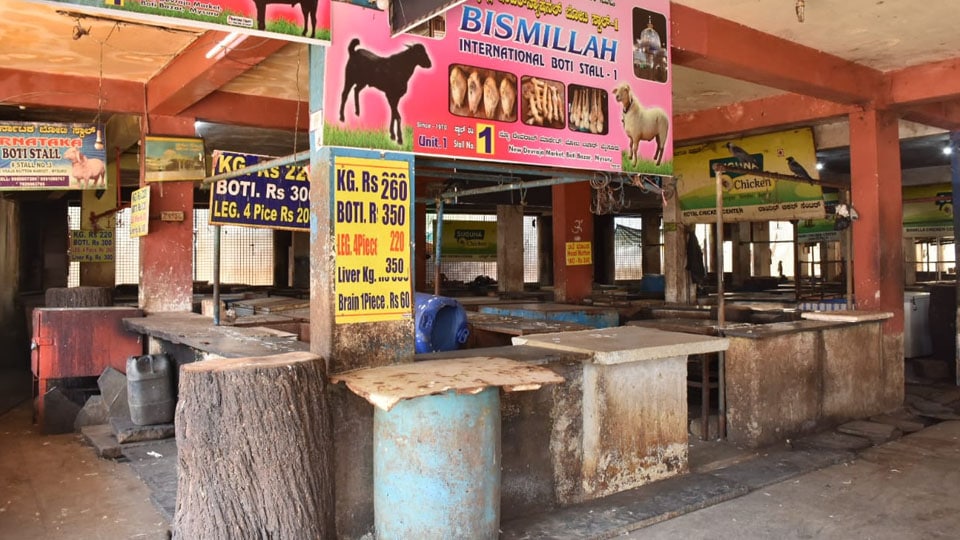 Mysore/Mysuru: Mutton stall owners in city, who have refused to sell the meat as per the rate fixed by the Mysuru City Corporation (MCC), have begun an indefinite stir.

Following the ban on fairs due to lockdown and as the MCC had banned the sale of chicken meat due to bird flu, demand for mutton had increased. As village fairs are banned, meat traders are now purchasing sheep and goat in rural areas by paying more than the earlier price.

Justifying the increase in the price of mutton, traders said that as the prices of sheep and goat have gone up, it has become inevitable for them to sell meat at higher price.

There are more than 500 licensed mutton stalls in city. Meat lovers are dependent on these stalls including the ones in Boti Bazaar. As mutton stall owners have closed the stalls, customers are now buying chicken meat and fish.

Mutton is being supplied to mutton stalls across the city from the slaughter house at Kurimandi in Old Kesare and mutton traders, who purchase sheep from various places, bring them to the slaughter house, pay a fee of Rs. 20, get the animal slaughtered and then take the meat to their stalls and sell it.

Following the announcement of lockdown, all shops (except grocery shops, medical stores and milk booths) were closed and due to demand by customers, mutton stalls were permitted to conduct business after Ugadi. But due to the lack of availability, only a few mutton stalls were open.

As the demand for meat grew, a few mutton traders, making use of the situation, increased the price of the mutton which crossed more than Rs. 650 per kilogram. At some stalls, prices touched Rs. 800.

Mutton traders are purchasing sheep and goat from Chitradurga, Haveri, Ballari, Kirugaval, Bannur, T. Narasipur and other places and even traders from the neighbouring Tamil Nadu are now dependent on Karnataka for sheep and goat. This has resulted in severe competition for the purchase of sheep and goat.

“We cannot sell the meat at the price fixed by MCC and officials should consider this and fix the price between Rs. 620 and Rs. 680 per kg. We make a profit of Rs. 20 per kg from which we have to pay the workers,” says Syed Ahmed Qureshi, President, Mysuru Mutton Merchants Association.

Before the lockdown was announced, the price of sheep meat had crossed Rs. 600 per kg. In Bengaluru, the price of mutton per kg is fixed between Rs. 750 and Rs. 800, Mandya Rs. 650, Hassan Rs. 650 and in Tamil Nadu the price is fixed at Rs. 1,000, claimed S. Nagendra, Secretary, Mysuru Mutton Merchants Association.

“As mutton traders from Tamil Nadu are dependent on sheep and goats from Karnataka, the demand and the rates have increased. We are dependent on this trade for a living and the MCC should protect us and fix a reasonable price,” Nagendra added.