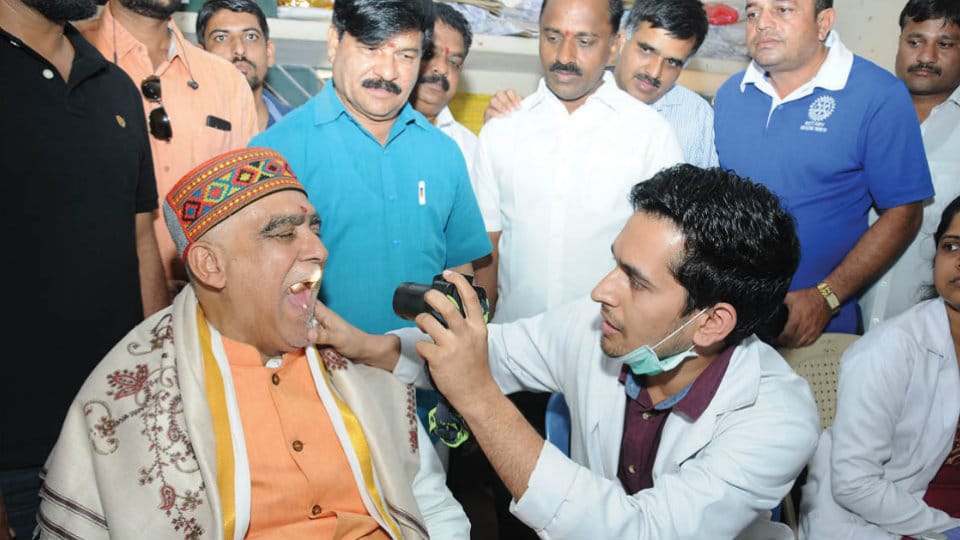 Mysuru: Union Health Minister Ashwini Kumar Choubey has been advised to undergo a cataract surgery within six months. Doctors examining the Minister at the ‘Arogya Mysuru,’ a free health camp run by MLA S.A. Ramdas, was asked on Sunday to undergo the operation on his left eye before the cataract aggravates.

Enthused by the doctor’s observation, the Minister also had a dental check-up at the camp.  He appreciated the pro-people works taken up by Ramdas.

Later speaking to reporters, the Minister said that lowering of prices of essential drugs and equipment has so far helped people in saving crores of rupees. Affordable facilities have benefited mainly those who were suffering from cardiac, knee and hip-related ailments, he said.

The camp was inaugurated by the Minister and over 3,000 patients including 393 children were screened for various ailments. The Minister also inaugurated a new outlet of Jan Aushadh Kendra on the premises of Sri Ganapathy Sachchidananda Ashrama.

Choubey said: “With the lowering of stent prices, the poor and economically weaker sections are able to save most of their income.

“Of the total 10,000 Jan Aushadh outlets planned across the country, 4,900 are operational in 600 districts. When compared to other States, Karnataka is way ahead with the overwhelming response being received from the people. In Mysuru district alone, there are 47 such Kendras including 25 in Mysuru city,” he said.

Mysuru Kodagu MP Pratap Simha and others were present.