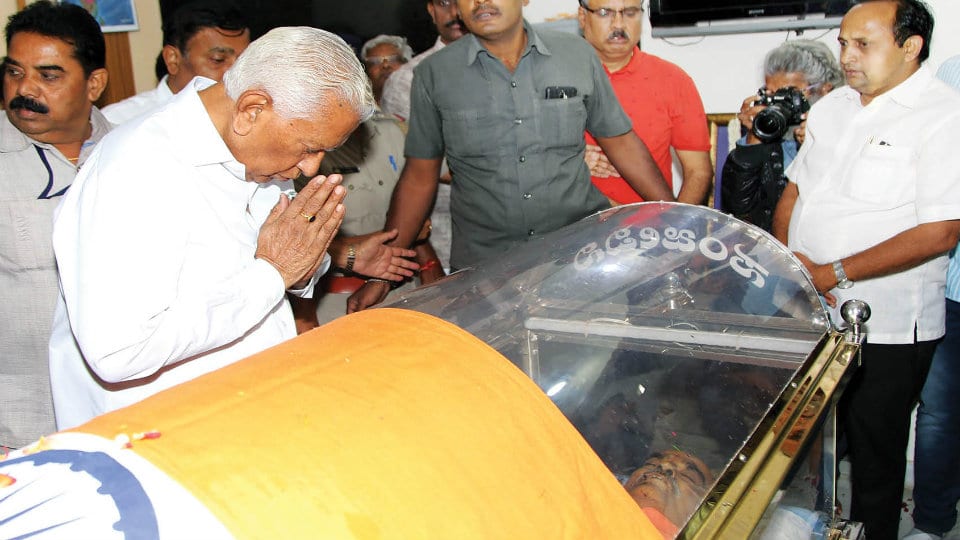 Bengaluru: Union Parliamentary Affairs Minister H.N. Ananth Kumar died at a private hospital in Bengaluru in the early hours of today after battling lung cancer for several months. He was 59.

Hubballi Narayan Shastri Ananth Kumar was serving as Union Minister of Chemicals and Fertilizers since May 2014 and Minister of Parliamentary Affairs since July 2016 in the Narendra Modi Government. He represented Bengaluru South Constituency in Lok Sabha and has been a Parliamentarian for six terms. In the 15th Lok Sabha, he defeated IT head-honcho Nandan Nilekani.

Ananth Kumar was diagnosed with lung cancer at an advanced stage in June. He underwent initial treatment in Sri Shankara Cancer Hospital and Research Centre in Bengaluru and then went to Memorial Sloan Kettering Cancer Centre, New York. He returned 25 days ago and continued treatment at Shankara Hospital. Hospital Managing Trustee B.N. Srinath said that he battled cancer fiercely, however, the infection had spread to other organs and he succumbed to the disease. He breathed his last around 2 am today with his wife Dr. Tejaswini and two daughters Aishwarya and Vijetha beside him.

Last rituals will be performed tomorrow morning at his residence in Basavanagudi till 7 am and then the body will be shifted to National College Grounds for people to pay their last respects. Cremation will take place at Chamarajpet crematorium.

Ananth Kumar is survived by his ailing mother Girija Shastri.

Prime Minister Narendra Modi is likely to chair a special meeting of the Union Cabinet today to condole the demise. A resolution condoling the demise and hailing his contribution would be passed. Modi is expected to arrive in Bengaluru this evening and pay his respects to the departed leader.

Narendra Modi called Ananth Kumar an “able administrator” and a “great asset to the BJP organisation.”  “He worked hard to strengthen the Party in Karnataka, particularly in Bengaluru and surrounding areas. He was always accessible to his constituents,” he tweeted.

“Deep sense of grief on hearing that Ananth Kumar is no more with us. Bengaluru was in his head and heart, always. May God give his family the strength to bear with this loss,” Defence Minister Nirmala Sitharaman tweeted.

Home minister Rajnath Singh said it is a big loss to the BJP and a “personal loss for me.” This is a tragic loss to public life in our country and particularly for the people of Karnataka, President Ram Nath Kovind said. Vice President Venkaiah Naidu said he was hoping he (Ananth Kumar) would recover and join back public service.

Karnataka Chief Minister H.D. Kumaraswamy said he was “deeply pained” to hear about Kumar’s demise and remembered him as a “pro-people leader and value-based politician.”

Congress President Rahul Gandhi too expressed grief over the demise of the senior BJP leader.

BJP president Amit Shah said Ananth Kumar’s passing away has left a void in the BJP and Indian polity that cannot be filled soon. BJP State President B.S. Yeddyurappa said, “I am under deep grief to hear about the untimely demise of my friend. He worked tirelessly to strengthen the BJP in Karnataka and nation. May his soul rest in peace and God give strength to bear his loss to his family.”

A three-day period of mourning has been declared by the State government, and schools, colleges and government offices remained closed today. Ananth Kumar will be accorded a State funeral.

Ananth Kumar was an able administrator and a great asset to the BJP organisation. He worked hard to strengthen the Party in Karnataka, particularly in Bengaluru and surrounding areas. He was always accessible to his constituents,” Narendra Modi tweeted.

Deeply pained to hear about Kumar’s demise. He was a pro-people leader and a value-based politician,” said Karnataka CM H.D. Kumaraswamy.