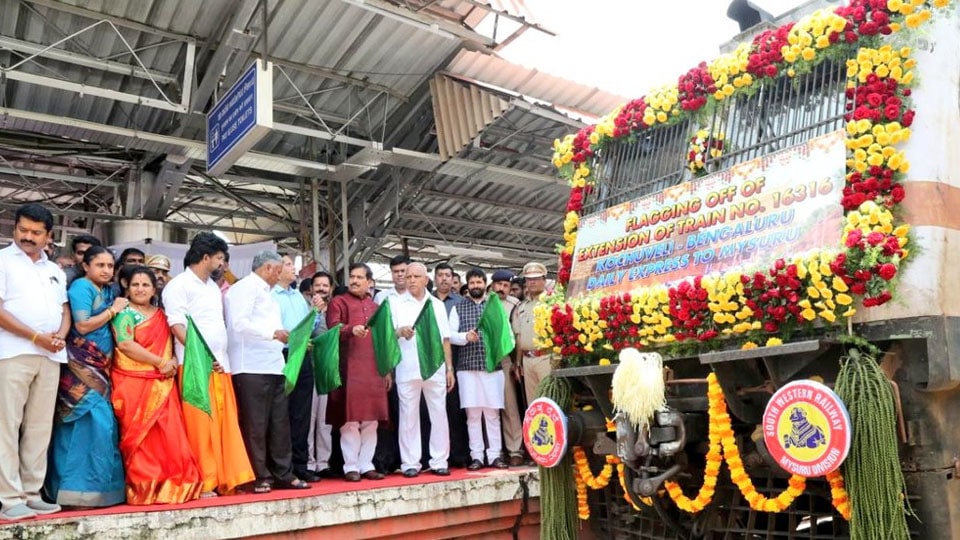 The CM also inaugurated the Escalator and the Reserved Lounge on Platform 6.

Speaking on the occasion, Suresh Angadi disclosed that the Union Government intends to infuse Rs.50 lakh crore into the Railways over the next 10 years which would also generate employment for the youth. He expressed confidence in Karnataka getting more benefits.

He contended that the extension of the train to Mysuru would help passengers going from Mysuru to Kerala and also help boost tourism. He commended MP Pratap Simha for launching the 7th train from Mysuru during the MP’s tenure from 2014. He added that he would appeal the CM to revive the popular Golden Chariot train for tourists.

Addressing the gathering, Chief Minister B.S. Yediyurappa thanked Suresh Angadi for giving due recognition for Karnataka regarding rail connectivity. He appealed the travellers to co-operate to maintain cleanliness in trains and Railway Stations.

MP Pratap Simha said that many more projects were there on cards regarding train services from Mysuru and added that efforts would be made to implement all the projects.