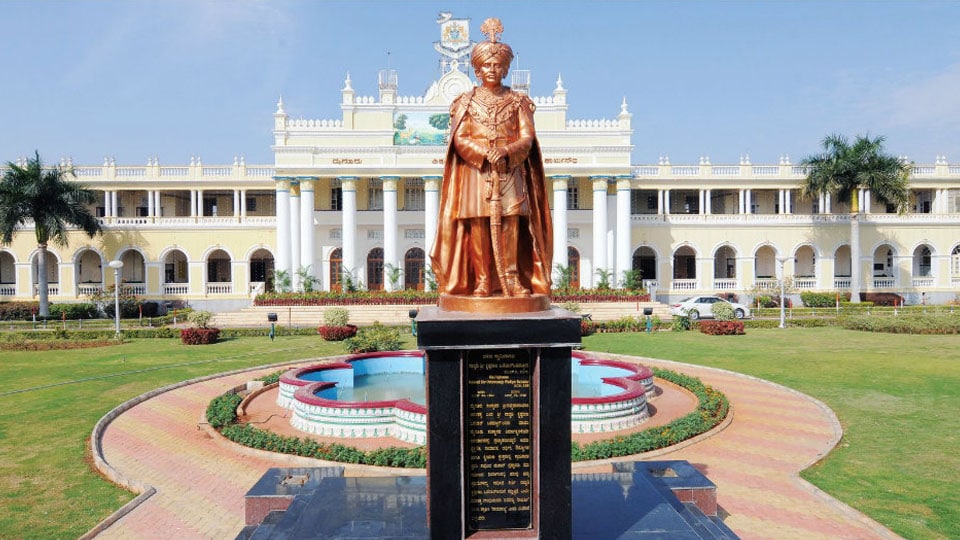 Mysuru: The University of Mysore (UoM) has been ranked 54th in the overall rankings at the fourth edition of the National Institutional Ranking Framework (NIRF) 2019, while JSS Academy of Higher Education and Research (JSS AHER) was ranked 34th. The list was released by the President of India yesterday.

The University of Mysore however, stands first in the State Universities in Karnataka with an overall 44.06 points.

University of Mysore first participated in 2017 wherein it had secured 36th rank in University category and 57th in overall category. However, it lost out on the ranking a year later, but due to the efforts of the Vice-Chancellor Prof. Hemantha Kumar, we managed to be back in the rankings this year, he said.

The University won the only State Public University of Karnataka State to secure such a position. This year other two Public Universities of the State to participate from Karnataka were Kuvempu University and Mangalore University which have secured 73rd and 87th rankings in University category but not found within 100 among overall category. Mysore Varsity figures in 80th position among overall category, he said. The first rankings were announced in 2016, and this is the fourth year of NIRF Indian Ranking. Altogether 4,867 institutions participated in nine categories for the year 2019, he said.

The five major frameworks and parameters for NIRF Ranking, apart from twenty-one sub-parameters and the points awarded out of 100 are: a. Teaching, Learning and Resources – 57.30 points, b. Research and Professional Practices – 18.15, c. Graduation Outcomes – 78.43, d. Outreach and Inclusivity – 52.67 and e. Perception – 4.70.

The two places where we failed are in Research and Professional Practices with just 18.15 points and Perception with a score of just 4.70. In the other parameters we have done fairly well, said Prof. Gandhi.

The analysis of each of the parameters and sub-parameters will be made, and serious efforts will be made to fill the gaps. A special team will be formed to strengthen NIRF Ranking and NAAC accreditation scores of the University in coming years. Due emphasis will be given to improve in the domains of “Perception” and “Professional Practices.” The University will soon take steps to fill up vacant teaching positions which helps in maintaining good average PTR (Pupil to Teacher Ratio), he said.

The present ranking status calls for cheer as we have not lost the race, it serves us as a wakeup call, and we rise up to big celebration in 2020 where the fourth cycle of re-accreditation of the University by NAAC and fifth year of India Rankings 2020 are due, next year, said Prof. Lingaraja Gandhi.