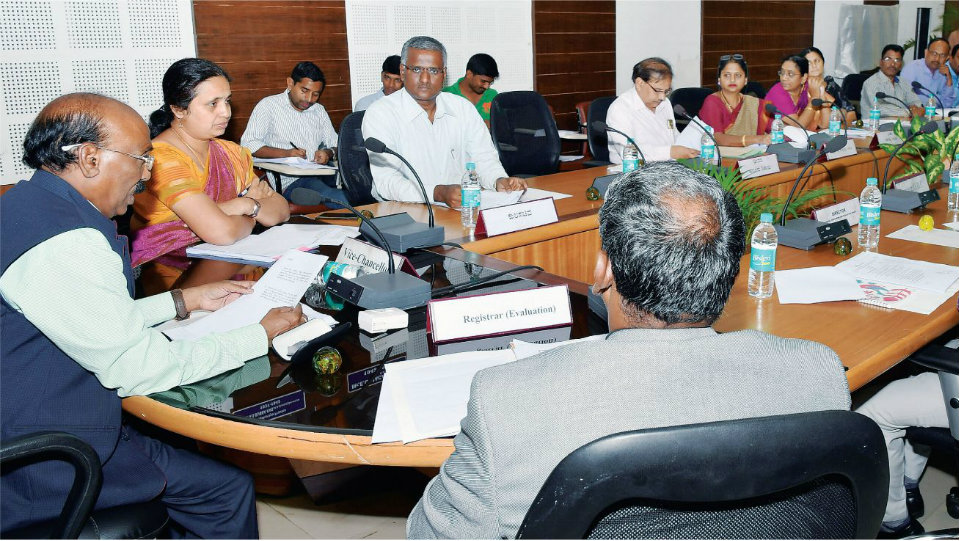 Mysuru: With the Centre having introduced Goods and Services Tax (GST) in the country, the University of Mysore (UoM) has also thought it prudent to introduce the subject in the ‘Professional Diploma in Tax Management.’

Chairing his last Academic Council meeting yesterday at the Crawford Hall here, acting Vice-Chancellor Prof. Dayananda Mane and the Council members approved the proposed change by replacing the VAT paper with a paper on GST. There were a few other decisions also taken like the ones relating to recruitment.

According to Prof. Yashwanth Dongre, Director, PMEB (Planning Management and Evaluation Board), the GST paper had already been introduced in the B.Com and M.Com courses during the beginning of the academic year itself. Since the students were studying VAT (Value Added Tax), it has been scrapped and instead replaced with a paper on GST, which is very relevant today, he added.

Prof. Dongre said that graduates from any recognised University were eligible to apply for the Diploma course. They will be selected based on marks scored in the qualifying examination.

The course will be in a semester pattern consisting of two semesters with five papers each. The duration of each semester will be for 16 weeks with placement training for 12 weeks.

According to Prof. Aisha M. Sheriff, Dean, Faculty of Commerce, Department of Studies in Business Administration, the placement training will be offered only after the completion of second semester examination. The successful students will be trained for placement in the Income or Commercial Tax Departments, Industries, Chartered Accountancy firms or as Tax Practitioners.

The Academic Council also approved the Statutes relating to direct recruitment based on the directions from the State Government’s Karnataka model. Prof. Dongre said that in the new system, the shortlisted eligible candidates have to write an eligibility test, which was not there earlier.

This decision has been taken to do away with subjective judgement while selecting candidates for the teaching posts in the University. The Board of Appointments will have just 9.8 percent weightage, whereas the rest depends on the performance criteria and the performance record of the eligible candidate, he said.

The decision was taken to implement the University Grants Commission (UGC) pay scales, revised from 2006 to teachers, Librarian and Physical Education Directors and other posts in the University.

However, one of the recommendations for Prof. Eminence status to those Professors who have put in more than ten years of service, which is there in the UGC guidelines, did not find favour with the Council members.

Free education to Martyr’s children: The Academic Council of the UoM took another important decision at yesterday’s meeting to provide free education to the children of Martyred soldiers, right from degree level up to Ph.D, just like it is being done for farmers’ children.

This facility will be provided to the children of any Martyred solider in any part of the country. The State Government earlier had sent a circular to all the Universities in the State to provide free education, food and accommodation to the Martyred soldier’s daughters. Similarly, the University of Mysore has decided to include all the children of Martyred soldiers and send the proposal to the State Government for approval, said acting Vice-Chancellor Prof. Mane.

Closure of Ph.D programmes: The meeting approved the request of the JSS Research Foundation (JSSRF) and Bio-Control Research Laboratories (BCRL), Bengaluru, not to renew the recognition granted for their Ph.D programmes.

In a letter to PMEB, University of Mysore, JSSRF Chief Executive T.N. Nagabushan had written that the Foundation is unable to comply with the regulations as per the new guidelines and hence, they have decided not to admit fresh research scholars from the year 2017-18.

However, those research scholars who have already been admitted can complete their work and submit the thesis.

Even the BCRL, Bengaluru, has said that it is not possible to renew the recognition granted for Ph.D programmes, due to unavoidable administrative reasons.