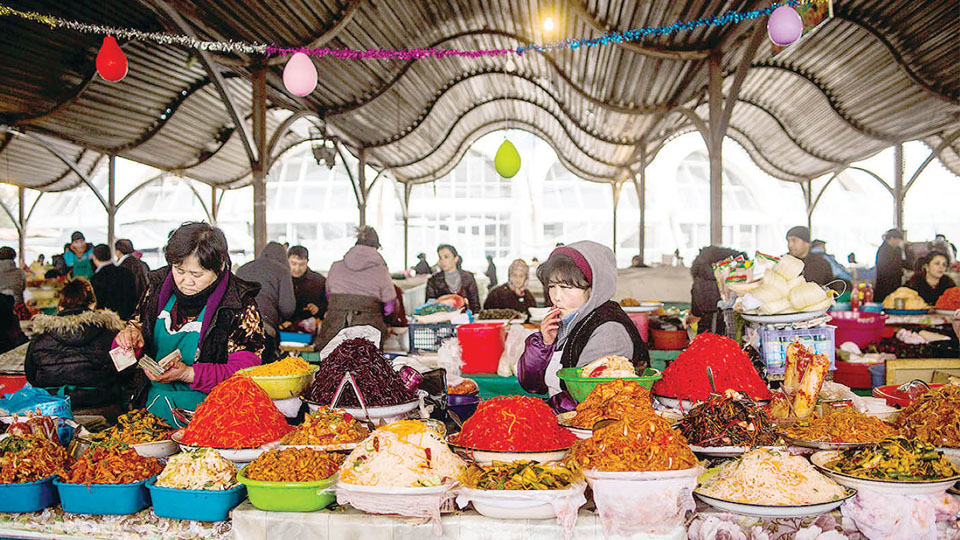 As we departed on our tour of the city, Akbar reeled off the city’s history of how it changed hands from the Arabs to the Mongols and subsequently ruled by Timur and Shaybandis. It was colonised by Russia in 1917 and Uzbekistan gained independence in 1991. “It was Islam Abduganiyevich Karimov, our first President who changed the fortunes of our country,” claimed Akbar, our guide. Though a controversial figure and is accused of measures which violated human rights, Karimov brought stability to the country and prevented radical Islamic elements taking a foothold in the country. “To me, he is like your Mahatma Gandhi,” he announced.

Though Tashkent was the capital and the country’s largest city and the seat of administration, the real jewels of Uzbekistan were the cities of Khiva, Bukhara and Samarkand. Tashkent is more a showcase city with museums, shopping centres and tombs of recent times.

The earthquake of 1966 reduced the city to rubble and with it the many historical monuments. Following the disaster, the city was rebuilt and modelled on Soviet architectural styles. The four-lane roads, manicured gardens and majestic statuettes of its rulers add to the grandeur of the city.

The design and architecture of the city’s new buildings blends well with the old structures without losing its original identity — a city so different from what one would have imagined of a Central Asian city. It is immaculately clean. Though 85% of the local population are Muslims by religion, the customs are relaxed.  The women do not wear burkhas nor do you hear Azam, the Muslim prayers read five times a day.  Men are clean shaven.  The Madarasas which are generally used to impart religious teachings elsewhere, is used more to teach skills in Uzbekistan.

Among the many attractions of Tashkent, it is impossible not to mention its bustling markets, aromas of eastern spices, ripe fruits and vegetables of Tashkent’s Bazaars, the Chorsu Bazaar in particular in the centre of the city. It is a maze of little alleyways with merchants selling every conceivable item. It is a one stop shop for trinkets to carpets, clothing, ceramic pottery, etc. It is a miniature version of the Silk Route trade of the past.

We Indians are generally cost conscious and we quickly do a mental math of the prices of everything, both goods and services. Chorsu Bazaar promised to be a shopping paradise with prices for almost everything comparable to India — or a shade less expensive. Fruits in particular is exceptionally tasty and a delight to the eye. Uzbeks do not understand vegetarianism. In their cuisine both camel meat and horse meat are delicacies! If you are not in a mood to try it, remember to say “bez myasa” (without meat). A vegetarian can survive on just grapes, melons, plums, pomegranates, apples and bananas available in plenty.

Khast-Imom Complex is where the world famous Quran of Caliph Uthman, the world’s oldest copy, which is said to date from the 7th century. The very impressive stately mosques endorsed Akbar’s observation that rulers of Uzbekistan laid stress on grandeur of structures and promoted art and craft.

The Minor Mosque, also called the White Mosque, is a recent structure opened during 2014. More than 2,000 people assemble in the large decorated hall during Eid prayers. Amir Timur Square is in the centre of Tashkent city and in the centre is the grand monument of Amir Timur.

To visitors from India, a visit to Shastri Monument (our former Prime Minister Lal Bahadur Shastri) is a must see stops. Shastri died in Tashkent, what is believed to be, under mysterious circumstances, soon after signing the peace accord with Pakistan in 1966.The Street has been named Shastri Street in his honour. 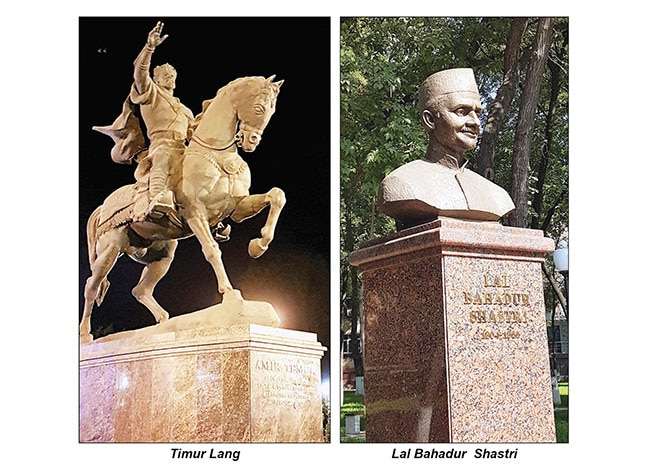 In a way I was happy that we first visited Tashkent city before visiting Khiva. The contrast was visible. It was like we had travelled a few centuries into time. Khiva was an important city that connected China in the East and Rome in the West.  It did brisk business during heydays of the silk trade and also for its notorious slave trade.

Khiva contains some of the best-preserved examples of Islamic architecture in Central Asia. The monuments are well-preserved and are a tourist delight. Having a good tourist guide which we were lucky to have, adds to the charm of the place and the memories can be lasting.  Khiva is rightly called a museum city with 79 Mosques and 64 Madrasas preserved over centuries. It deserves being listed as a world heritage city by UNESCO.

A ten-metre high brick wall encircles the city with private dwellings that exist even to this day. The inner city stretches over two kilometres and has several narrow lanes criss-crossing the town. We had arrived in the noon and the shadows falling on the ancient structures were lengthening by the minute. The monotone mud walls seemed to come to life with the shadows in motion with the setting sun. 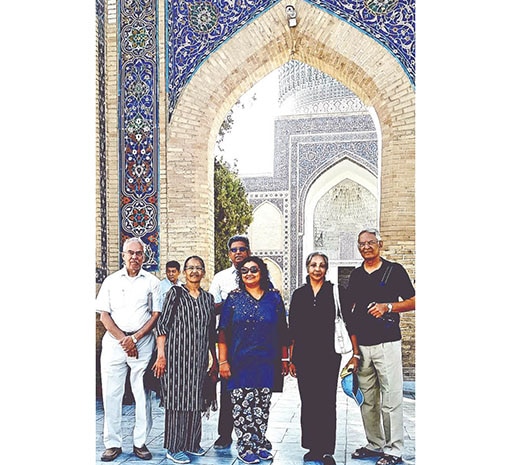 Bukhara is the next important trading post on the Silk route. This too has been listed as a heritage city by UNESCO with over 140 protected monuments.  What sets Bukhara apart from other cities in Uzbekistan is its tag as an intellectual centre of the Islamic world. Poets Firdausi and Rudaki and philosopher Avicenna (Ibn Sina), equated to Newton and Shakespeare of the West, lived in this city. Bukhara is also a home of some of the most skilled artisans.

It is also among more vibrant cities with performing artistes showcasing Uzbek dances, music and clothing. The events are centred around Lyab Haux (meaning, by the pond) with restaurants and shops. The Kukeldash Madrasah, the largest in the city and the Khanaka Madrasah on either side of the pond adds to the vintage setting of the city centre. There are remnants of the once vast market complexes that attract tourists in hordes not only to buy carpets and textiles, but also to see how the place was once used to rest the camels after crossing the deserts.

Samarkhand is the land where once Chengis Khan and later Timur the Lame who made this as their capital. Incidentally, Babur who established Mughal Dynasty in India hails from Samarkhand.

Samarkhand became an economic power-house and cultural centre in Central Asia. The principal features of Samarkand’s ancient buildings are their splendid portals, their vast coloured domes and their remarkable exterior decorations in mosaic, marble and gold. The historic city was designated a UNESCO World Heritage site in 2001.

Rigestan Square, an impressive public square in the old city, is fronted by several Madrasas (Islamic schools) that of Timur’s grandson, the astronomer Ulugh Beg. Interestingly, most important cities in Uzbekistan have a clear distinction of the old city and the new one. Identity of each is well-maintained and preserved.

It is surprising that so much less is known of this country, though it takes as much time to reach the place as it takes to reach Delhi from Bangalore. Weather-wise it is friendly to travel provided one avoids the winter months. Time-wise the difference is only thirty minutes and finally, cost-wise, it is very affordable compared to the West.

Don’t forget to carry the ‘Chutney Pudis’ and pickles if you are a strict vegetarian. Lately, visas to enter the country can be obtained online. Good luck and Bon Voyage!