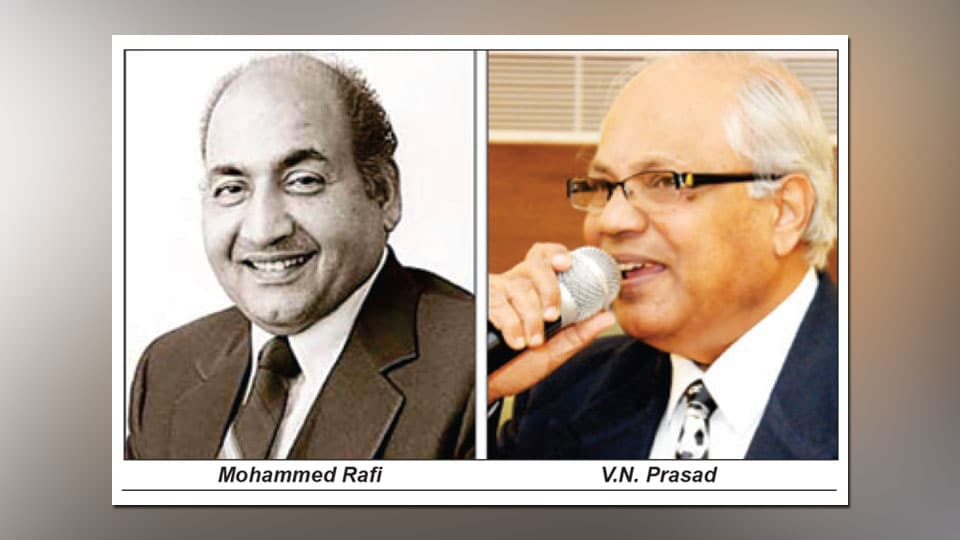 Melodies of yesteryears have left indelible impressions on the minds of music-lovers the world over. Soothing numbers of great composers, lyricists and musicians steal our hearts even to this day. Under the auspices of Rotary Ivory City Mysuru, V.N. Prasad and Troupe will present their next Musical Nite titled ‘ADAAB RAFI 2’ on Sunday, the 2nd of April, at the Platinum Jubilee Auditorium, J.K. Grounds, Mysuru, at 5.30 pm to raise funds for Rotary Ivory City.

Rafi’s daughter  Nasreen Ahamad and son-in-law Meraj Ahamad will be the guests of honour. They will be felicitated between 5.30 and 5.45 pm. Music-lovers are requested to be seated by 5.15 pm.

‘Youth Service’ is a very important component of Rotary movement. Honing skills of youngsters in constructive fields is an avenue of service to the youth. In this avenue, V.N. Prasad has been constantly promoting young singing talents for three decades, many of whom have become commercial singers today. In this programme, 20-year-old singing sensation, Shabbir, makes his debut.

Rafi’s versatility was incomparable. He was an adept in emoting lyrics to suit the situations. Composers like Naushad, O.P. Nayyar, Kalyanji Anandji, Laxmikanth Pyarelal, Roshan, Ravi, Shankar Jaikishen, Sachin Da, Pancham Da etc., virtually out did one another to bring out the best of Rafi. Great lyricists like Indeevar, Gulzar, Anand Bhakshi, Javed Akhtar, Sahir Ludhianvi, Majrooh Sulthanpuri, Hasrad Jaipurietc wrote lyrics that blended so very beautifully to sync with the compositions.

Born to a poor family in a village off Amritsar, Punjab, in 1924, Rafi’s education suffered. But he showed keen interest in singing as he grew into his early teens. He was shifted to Bombay in 1944 and was trained under classical musicians. Composer Naushad rendered support to emerging Rafi. Rafi’s first song for Naushad was “Hindustan Ke Hum Hain” (“We belong to Hindustan”) for the film Pehle Aap in 1944. He struggled in the shadow of Talat Mahmood and Saigal for long years. Rafi got major breakthrough in 1952 in ‘Baiju Bawra.’ Subsequently, until 1980s, Rafi ruled the Hindi film industry with classic numbers for actors like Dilip Kumar, Dev Anand, Rajendra Kumar, Raj Kumar, Jeetendra, Dharamendra, Amitabh Bacchan, Rajesh Khanna amongst the greats. At 10.30 pm, on the 31st of July, 1980, Rafi breathed his last due to a massive heart attack in Bombay on the lap of his son-in-law Meraj Ahamad, who will be present at the programme. 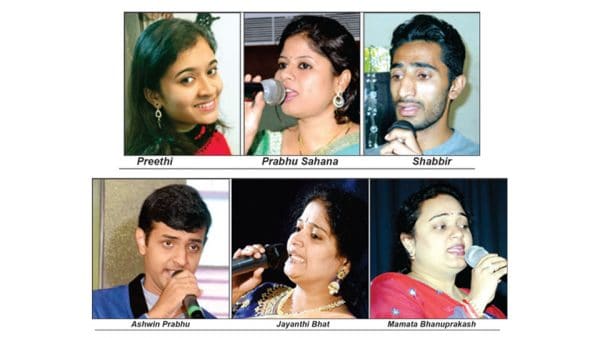 In the April 2 musical evening, Prasad will be accompanied by Ashwin Prabhu, Preethi Prabhu, Jayanthi Bhat, Sahana Nayak, A.S. Khan, Shabbir and Prasad’s daughter Mamata Bhanuprakash. The programme is divided into six sections to bring out the best renditions of legendary Mohammed Rafi.

The programe will be compered by Kavitha Vinod and  Nandini Narayan, members of Inner Wheel Mysore Central. They will be giving out historic details of each song. Song sequences will be projected on a LED screen bringing nostalgic memories of the movies of yesteryears.