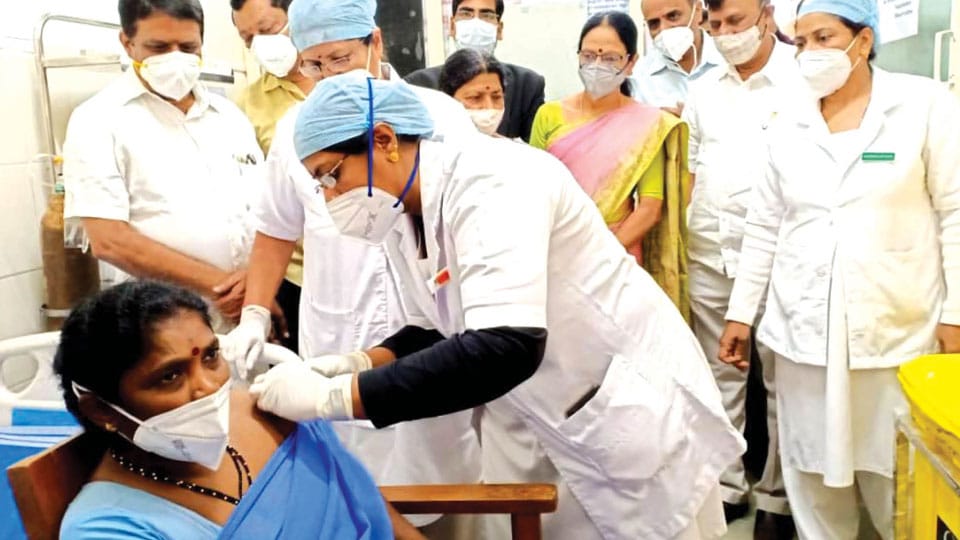 Mysuru/Bengaluru: While the hilly district of Kodagu registered the highest vaccination percentage of 84 per cent, Dakshina Kannada has clocked the lowest percentage of 34 per cent on the first day of nationwide vaccine drive launched by Prime Minister Narendra Modi on Saturday.

As against 21,658 persons identified for taking vaccine on the first day in the State, 13,408 persons turned up at their respective session sites to receive the first dose of Covishield Vaccine. That means, around 62 per cent of healthcare workers were inoculated. “Except swelling in a few beneficiaries which was quite common in any vaccine, there has been no major or serious side effects reported in any one,” Health and Medical Education Minister Dr.K. Sudhakar told Union Health and Family Welfare Minister Dr. Harsh Vardhan, during the video conference after the successful first day vaccination drive.

Dr. Sudhakar said that vaccination drive would resume in Government Hospitals from Monday, where as Private Hospitals conducted the drive for its staff members today (Sunday). Karnataka had received 8 lakh doses of vaccine and 7.43 lakh people have been identified for the first phase of vaccination. The State has asked the Central Government to provide an additional 8 lakh doses of vaccine. People have understood Prime Minister Narendra Modi’s vision of vaccinating  Safai Karmacharis on priority, but Opposition parties would not, he regretted.

Three cases of Adverse Event Following Immunisation (AEFI) had been reported from JSS Hospital, Mysuru Vaccination was held in nine session sites in the district including two in city.

Dr.L. Ravi, Reproductive and Child Health Officer and COVID-19 Vaccination Officer, attributed low turn out of beneficiaries to session sites on the first day due to ‘fear factor.’

A majority of beneficiaries listed in the first round inoculation on the first day, did not turn up in Hunsur, Trauma Care Centre, Mysuru, Nanjangud, Rangasamudra PHC and K.R. Nagar Taluk Hospital despite informing them well in advance. Some of them were not accessible on the mobile phones. Some beneficiaries missed the first dose due to technical glitches in CoWIN App.

The Health Department had made Dr.R. Balasubramaniam, Founder-President of Swami Vivekananda Youth Movement and Dr. H.M. Virupaksha, Head, Department of Pulmonology and Medical Superintendent of PKTB Hospital to receive vaccine on the first day to instill confidence among fellow healthcare staff. But it did not yield results as some health workers refused to be vaccinated due to fear of side effects, Dr. Ravi added.