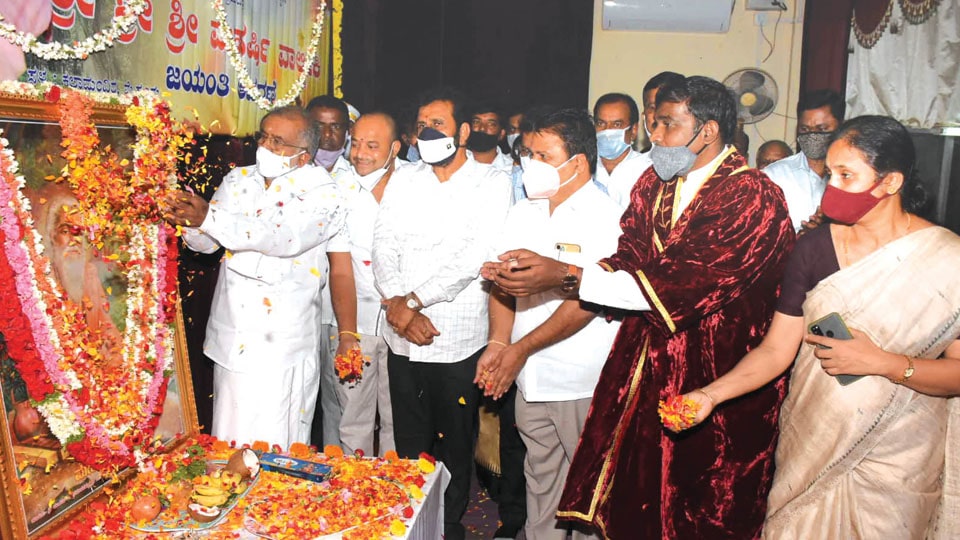 Mysore/Mysuru: Showering of petals on the portrait of Maharshi Valmiki marked the Valmiki Jayanti celebrations organised by the District Administration in association with Zilla Panchayat (ZP), Mysuru City Corporation (MCC), Mysuru Urban Development Authority (MUDA) and ST Welfare Department, at Maneyangala in Kalamandira premises here this morning. The District Administration had kept the celebrations a simple one in the wake of COVID-19 crisis, with no procession and cultural events.

ST community student Ashwini of the city’s Taralabalu High School, who came topper for the community in SSLC exam (2019-20) scoring 621 out of 625 marks, was presented a Rs. 1 lakh cheque on the occasion as Pratibha Puraskar.

Later speaking to press persons, Chamundeshwari JD(S)MLA G.T. Devegowda (GTD) said that Maharshi Valmiki has sent out an apt message for the entire society by writing Valmiki Ramayana. Lauding the Government’s move of organising lectures by resource persons at schools and colleges marking Valmiki Jayanti in order to educate the present day generation about Valmiki’s life and writings, he said that Valmiki Ramayana is relevant for all times.

Coming to the issue of inclusion of three Gram Panchayats  (GPs) in the outskirts of the city, Devegowda wondered why the MCC was opposing the idea.

Regretting that Mysuru, which is known as the Cultural Capital of the State and the City of Palaces, beckons visitors and tourists with heaps of garbage all along the Outer Ring Road, he said that the inclusion of the three GPs, which are located in the vicinity of the Ring Road, will help in the beautification of localities which are surrounded by heaps of garbage.

READ ALSO  Babus carry heavy files to CM but take them back!

Pointing out that the MCC Council had passed a resolution to this effect in 2017 itself, he wondered why the MCC was opposing the inclusion now.

Noting that he participated in the MCC Council meeting held on Oct. 29, during which he explained the pros and cons of the inclusion of the three GPs, he wanted to know why the MCC is dragging its feet on the issue when MUDA has formed Layouts beyond the Ring Road and the MCC too is issuing Khatas for sites.

Stating that he has come to know that the MCC is seeking Rs. 5,000 crore grant for inclusion of the GPs, GTD said that the MCC can develop the GPs out of the revenues that it can earn from all the commercial activities that are going on in these GPs.

He further said that it is learnt that a fellow party MLA, who is not concerned with the city and MCC, was blocking the efforts to bring the three GPs under the MCC jurisdiction.